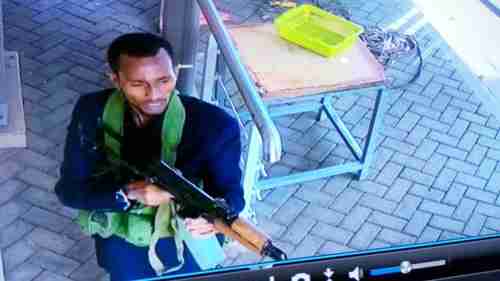 Al-Shabaab is considered the deadliest terrorist organization in Africa and has conducted several spectacular terrorist attacks in Somalia and Kenya.

The attack on Tuesday came three years to the day after al-Shabaab extremists attacked a Kenyan military base in neighboring Somalia, killing scores of people.

Tuesday’s attack comes on the third anniversary, to the day, of an al-Shabaab ambush on the El-Adde camp in Somalia, killed 170 Kenyan soldiers.

The reason that the Westgate Mall attack lasted for three days is that the Nairobi police were ill-prepared to respond to it, and received a great deal of criticism as a result. The Dusit hotel is less than 2 km away from the Westgate mall. Tuesday’s attack on the Dusit hotel was handled more efficiently by Nairobi’s police, though it still lasted several hours.

CCTV footage has emerged showing that there were four assailants who carried out the attack. The hotel is in a supposedly very secure part of Nairobi, but the attackers gained access to the hotel by hurling grenades at the security officers manning the gate.

The Dusit hotel complex consists of a number of buildings and many were attacked. Police went from building to building and rescued hundreds of people who were trapped in hotel rooms or offices.

One of the CCTV images captured what appears to be a U.S. Navy SEAL rescuing civilians and then returning to the scene of the fighting. The Pentagon has U.S. special forces in a number of countries in Africa, describing their mission as “advising and assisting.” In Kenya, the U.S. has a small presence at Camp Simba, where they reportedly train naval special forces.

Al-Shabaab has vowed retribution against Kenya for sending troops to Somalia since 2011. The al-Qaeda-linked group has killed hundreds of people in Kenya, targeted more than any other of the six countries providing troops to an African Union force in Somalia. Kenyans and AP and The Star (Kenya) and Business Insider

Al-Shabaab is a Somalia-based terror group that has pledged allegiance to al-Qaeda. In 2014, they debated changing allegiance to ISIS but rejected the change, resulting in the formation of a small splinter group. The group conducts massive terror attacks in Somalia, Kenya, and Tanzania. It has an estimated 3,000-6,000 members, including members that it has successfully recruited from the Somali diaspora in Minneapolis, Minnesota. In the case of the Westgate Mall attack, three terrorists were from the United States, including two from the Somali community in the twin cities (Minneapolis and St. Paul) region of Minnesota.

Al-Shabaab’s predecessors have been around in Somalia since the 1980s. During the 2000s, they were responsible for numerous pirate attacks on vessels off the coast of eastern Africa. Since 2007, the African Union Mission in Somalia (AMISOM), consisting of troops from Kenya, Burundi, Ethiopia, and Sierra Leone, have targeted the group. U.S. drone strikes and airstrikes have killed several of the group’s leaders.

Al-Shabaab’s targets are usually governmental, with the stated goal of ejecting Western influence and converting Somalia into an Islamic Sharia state.

The U.N. Security Council had ordered the withdrawal of AMISOM troops starting in October of last year, after which Somalia security forces were expected to begin taking over. However, the withdrawal was postponed until February of this year. However, a recent spate of successful attacks, despite the presence of AMISOM troops, has given credence to the view that Somalia security forces are too weak to take over, and the departure of AMISOM would result in the complete al-Shabaab takeover of Somalia. Jamestown (12-Oct-2018) and Council of Foreign Affairs (11-Dec-2018) and International Crisis Group (21-Sep-2018)