In turnaround, Saudi Arabia will give $10 billion to Pakistan, rejecting Iran 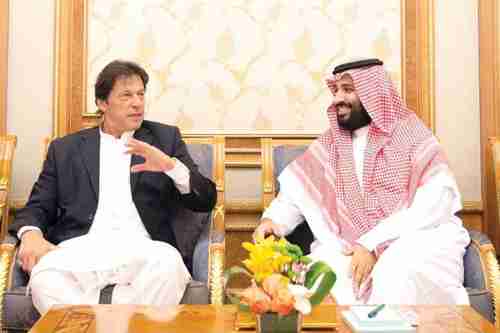 From the first day that Pakistan’s prime minister took office in August, the country has been facing an imminent financial crisis and bankruptcy due to a lack of foreign reserves (that is, U.S. dollars that it can use to purchase imported goods).

First, Imran Khan, self-described as “desperate,” went begging to Saudi Arabia and the United Arab Emirates (UAE) for a loan, but returned empty-handed.

Then Khan went begging to “all-weather friend” China, but once again came back empty-handed.

What China really wanted was for Khan to get money from the International Monetary Fund (IMF) so that the IMF, and the U.S. taxpayer, would be supplying money to repay China’s loans for the China-Pakistan Economic Corridor (CPEC), and the Gwadar seaport. The IMF was willing but insisted first that all details of all contracts between Pakistan and China be made available to the IMF, and China vetoed that idea. So the negotiation with the IMF failed.

Then there was a world-shaking event that changed everything: Washington Post journalist Jamal Khashoggi was bizarrely killed in the Saudi Arabian embassy in Istanbul, Turkey, and everyone in the world was blaming Saudi Crown Prince Mohammed bin Salman (MBS). Imran Khan was able to return to Saudi Arabia as almost the only national leader left who was willing to support MBS. Khan leveraged MBS’s embarrassment to obtain a $6 billion loan from Saudi Arabia.

However, Pakistan still needed an additional $12-15 billion in aid to survive through 2019. A renewed request to the IMF yielded the same results as before.

But now there has been a turnaround. Pakistan and Saudi Arabia are likely to sign memoranda of understanding for more than $10 billion Saudi investment in Pakistan this month. This will be in addition to the $6 billion in aid already agreed.

There are two major geopolitical effects from this deal.

First, Imran Khan, before he was prime minister, was one of the most vocal opponents of the proposal to send Pakistani troops to join the war in Yemen on the side of Saudi Arabia. The $16 billion in Saudi aid to Pakistan may have come with strings attached, namely that Pakistan will have to provide some sort of support, perhaps even troops, to the Saudi effort in Yemen.

The second effect is related to the first, since the Yemen war is a proxy war between Saudi Arabia and Iran and Pakistan has been trying to remain neutral between the two countries, possibly even taking the lead in mediating. This situation means that Pakistan will be clearly on the side against Iran and both the Arab and Iranian press have been saying so.

The Generational Dynamics prediction for almost fifteen years has been that in the approaching Clash of Civilizations world war, China and Pakistan would be allied with Saudi Arabia. As a result of the $16 billion in aid, Pakistan is now clearly allied with China and Saudi Arabia. Dawn (Pakistan) and Arab Weekly and Global Village Space

India takes over operations at Iran’s Chabahar port, despite US sanctions

India has taken over operations of the strategic Chabahar port, on the coast of Iran near Pakistan. India and Iran signed a deal in 2016 to develop the port so that India can bypass Pakistan in shipping goods to Iran and from there to Afghanistan, Central Asia, or Europe. ( “25-May-16 World View — Iran-India sign ‘historic’ Chabahar port deal to counter Pakistan-China”)

During the last year, development of the Chabahar port faced special difficulties after the U.S. re-imposed sanctions on Iran, making the Chabahar port project a violation of the sanctions since it required India to import Iranian oil. However, India and Iran received one of the waivers that the Trump administration gave so the port project could proceed.

In addition, Iran and India have signed banking agreements that allow imports and exports, as well as other financial needs, to be handled despite the sanctions. Part of these agreements allows goods to be exchanged in a barter system. For example, India can provide steel rails and locomotive engines to Iran and Iran can provide urea to India.

Just as the aid deal cemented the relationship between Saudi Arabia and Pakistan, the Chabahar port has cemented the relationship between India and Iran. For almost fifteen years, Generational Dynamics has predicted that America, India, Iran, and Russia would be allied in the approaching Clash of Civilizations world war, and the Chabahar port deal brings that alliance one step closer. Hindus and Shia Muslims have been allied against Sunni Muslims for centuries, going back as far as the seminal Battle of Karbala in 680. Tehran Times and India Today and Eurasian Times