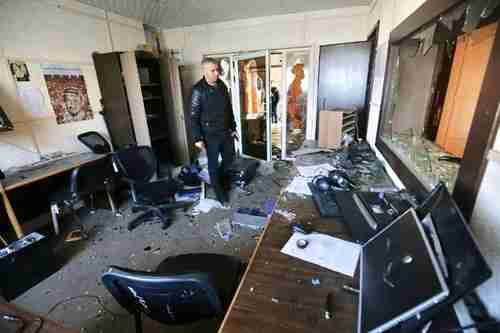 The trigger for the latest fallout was, apparently, plans by Fatah’s 83-year-old leader Mahmoud Abbas to celebrate the 54th anniversary of the launching of Fatah’s first attacks against Israel and to do so by holding several rallies throughout the Gaza strip, governed by Hamas.

According to Fatah, Hamas prevented those rallies from taking place by arresting 500 of its men in the Gaza strip, subjecting many of them to torture and raiding the homes of many Fatah officials and activists, confiscating material and equipment that was supposed to be used during the Fatah rallies.

Then, to make matters worse, Hamas allowed Abbas’s political rival, Mohammed Dahlan, and his supporters to hold their own rallies to celebrate the 54th anniversary of Fatah’s first attack against Israel, according to the Jerusalem Post.

This had led to vitriolic mutual accusations, with each side accusing the other of being a traitor. Abbas accused Hamas being “spies” for Israel, while Hamas accused Abbas of being a dictator, senile, a liar, and mentally unstable. Abbas was called a collaborator because of the security coordination between his security forces and Israel in the West Bank.

On Friday, five armed men entered the offices of the Palestinian Authority’s media headquarters in Gaza, assaulted the workers and destroyed equipment, including cameras, equipment, furniture, and broadcasting equipment.

On Saturday, Hamas arrested five men and accused them of being the perpetrators, and also announced that all five men were Fatah employees whose motive was revenge for not getting paid salaries. However, Fatah leaders hold Hamas responsible.

On Friday evening, Abbas announced a halt to payment of salaries and social welfare to thousands of Palestinians in the Gaza Strip, which amounts to $96 million monthly. Fatah also announced it would close all its offices in Gaza “in anticipation of any attacks on them.”

On Saturday, Fatah announced that it would be withdrawing its employees from the Rafeh border crossing between Gaza and Egypt. This border crossing is a lifeline to many Gazans, but it has been closed for many periods in the last ten years. Thanks to Hamas-Fatah mediation efforts by Egypt’s president, Abdel-Fatteh El-Sisi, the Rafah crossing has been open continuously for several months, under the condition that Fatah provides the guards to run the crossing. Egypt has not commented, and it is not clear whether Hamas will be allowed to replace Fatah in operating the crossing.

For several years, Egypt’s President Abdel-Fatteh El-Sisi has been trying to mediate a reconciliation between Hamas and Fatah so that they can form a unity government representing all Palestinians. Once that is done, the grand fantasy is that this unity government can then negotiate with Israel for the boundaries in the two-state solution, which will produce two nations, Israel and Palestine, side-by-side in peace.

As I wrote in my very first Generational Dynamics analysis on May 1, 2003, when President George Bush published his “Mideast Roadmap to Peace,” which described the details of a two-state solution, that will never happen. Generational Dynamics predicts that the plan would fail because the Jews and the Arabs would be refighting the 1948 war that followed the partitioning of Palestine and the creation of the state of Israel.

All the machinations and negotiations for a unity government and a two-state solution are completely naive. Polls have shown that young Palestinians consider 83-year-old Mahmoud Abbas to be a fool. The Hamas leaders get more respect because they are a generation younger, but not much more respect. What they are all waiting for is a young obsessed fanatic, their own version of Alexandria Ocasio-Cortez, to inspire them to become martyrs for their cause.

Generational Dynamics predicts that the Mideast is headed for a major regional war refighting the 1948 war between Jews and Arabs that followed the partitioning of Palestine and the creation of the state of Israel. The war will also pit Sunnis versus Shias and various ethnic groups against each other. Iran is controlled by an ancient generation of hardliners whose policies are strongly opposed by the growing population of younger generations. Generational Dynamics predicts that in the approaching Clash of Civilizations world war, the “axis” of China, Pakistan and the Sunni Muslim countries will be pitted against the “allies,” the US, India, Russia, and Iran. Jerusalem Post (2-Jan) and Mideast Eye and Al Arabiya (5-Jan) and Jerusalem Post (5-Jan) and Reuter 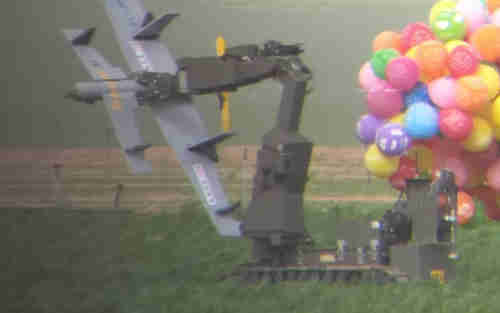 A police bomb disposal robot carries away a drone-shaped device from a carrot field that had been flown in from Gaza by a cluster of helium balloons on Sunday. (Israel Police)

On Sunday morning, a large object was flown into Israel from Gaza by means of a large cluster of helium balloons. The object looked like a drone glider, although it was apparently not capable of flight. The name of a Gaza engineering college was printed on the side of the object.

The device landed in a carrot field in southern Israel. A police bomb disposal robot examined the device, causing it to explode like a bomb. The drone lookalike was then carried away.