Trump announces that U.S. troops will deploy near D.R. Congo 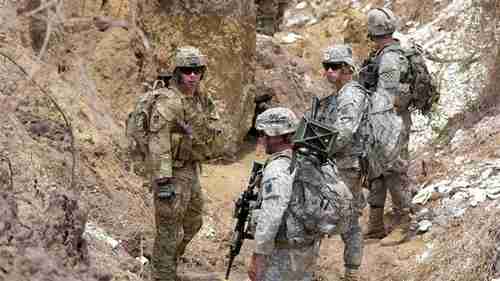 American soldiers in a combined training exercise with Senegalese troops in Thies, Senegal, on July 25, 2016 (AFP)

President Trump announced that U.S. troops will be sent to Gabon, in anticipation of “violent” demonstrations in the Democratic Republic of Congo (DRC) if and when the results of the December 30 presidential election are announced.

The announcement came in a Friday evening letter to House Speaker Nancy Pelosi:

This action was taken consistent with my responsibility to protect United States citizens both at home and abroad, and in furtherance of United States national security and foreign policy interests, pursuant to my constitutional authority to conduct United States foreign relations and as Commander in Chief and Chief Executive.

I am providing this report as part of my efforts to keep the Congress fully informed, consistent with the War Powers Resolution (Public Law 93-148). I appreciate the support of the Congress in these actions.

The letter indicates that the U.S. is concerned with the safety of American officials and facilities in Congo, not with the DRC electoral situation itself. A State Department travel warning was issued in mid-December, urging Americans to “reconsider travel” to DRC “due to crime and civil unrest.”

Gabon is a small country on the northwest border of DRC. Libreville is the capital city. White House and CBS News and CNN

The president of CENI, the election commission of the Democratic Republic of Congo (DRC), indefinitely postponed the release of the preliminary results of the December 30 presidential election, saying that it was not yet clear when the results would be ready for release.

The election was originally supposed to take place in December 2016. Joseph Kabila, the incumbent president, is not permitted to run again, according to the constitution, and so he has postponed the election several times. The last postponement was from December 23, 2018, to December 30, when the election finally took place.

In the week prior to the election, Kabila’s election commission said that the election will still be held, but will be delayed until March in three cities: Beni, Butembo, and Yumbi. The reasons given for Beni and Butembo are that there are Ebola outbreaks in those cities and that voting would be “dangerous.” However, voting has not been delayed in other cities with Ebola outbreaks. What these three cities have in common is that they are strongholds for anti-Kabila opposition. On election day, the local government of Beni held its own elections, just to prove that voting was not “dangerous.”

Preliminary results were to be released today (Sunday, January 6), until the CENI announcement on Saturday, delaying the release.

There are widespread suspicions that Kabila is trying to find a way to rig the vote count so that the winner will be his hand-picked successor, Emmanuel Ramazani Shadary. Many people believe that if Shadary wins, then he will just be a puppet with Kabila as the puppetmaster.

Kabila has shut down the internet all week, supposedly to prevent the incitement of riots. Kabila has made it illegal for any organization to announce election results before CENI does. It is believed that these laws were specifically targeted against the Catholic Church, which had sent more than 40,000 observers to polling stations across the country.

On Thursday, the National Episcopal Conference Of Congo (CENCO) released a lengthy statement about its conclusions. It listed several irregularities in the voting procedures and then reached a startling conclusion: From its own data, CENCO knows who won the election but will not announce the name, in keeping with the law against announcing election results.

CENCO called on the election commission to do the following:

In order to respect the will of the People and to dispel any suspicion, CENCO proposes the following scheme for the integrity of the results which will have to be published:

1 Only take into account the results from manual counting that were published and posted in front of the polling and counting stations;

2 Ensure that the consistency check at the Local Results Compilation Centers (CLCR) is carried out in the presence of observers and witnesses.

CENCO did not name the purported election winner, but reports indicate that it was the main opposition candidate, Martin Fayulu.

The capital city Kinshasa is very tense right now. There were almost full-scale riots in December 2016, but the Catholic Church intervened and quieted the situation. If CENI continues to delay announcing the election results, or if it announces that Shadary is the winner, there may be widespread riots again.

The situation is so serious that it is believed that this is the reason that President Trump announced the deployment of troops to Gabon, available to protect the safety of American officials and facilities in DRC. Reuters and Guardian (London) and CENCO (DRC Catholic Church)

The Ebola outbreak in eastern DRC is still growing, but not as quickly as had been feared. The outbreak total is 613 cases, including 565 confirmed and 54 suspected cases. Health officials are still investigating 54 suspected infections.

According to Tedros Adhanom, the Director-General of the World Health Organization (WHO), the DRC Ebola outbreak would have been much worse without the use of Merck’s experimental Ebola vaccine, known as VSV-EBOV. He based his assessment on the fact that infections have not grown exponentially. Center for Infectious Disease Research (CIDRAP)