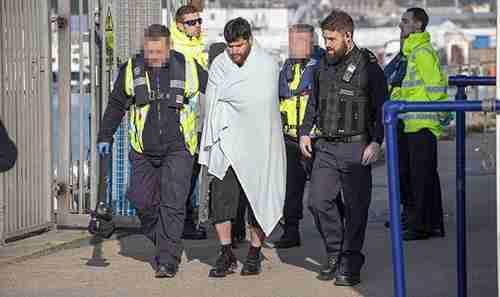 Migrants from France arriving in Dover, England, this week (SPLASH)

It is hard to overestimate what a political disaster Brexit has been ever since the referendum passed on June 23, 2016. Britain, and to some extent the EU, have been almost completely deadlocked for two years. Now the committed date when Britain will leave the European Union is March 29, 2019.

The problem has always been the border between Northern Ireland (which is part of the UK) and (Southern) Ireland (which will remain part of the EU). Ireland and Northern Ireland have an extremely violent history described as “The Troubles,” which were resolved by the Good Friday agreement in 1998 which, among other things, committed to remove any physical border between the two and allow free movement of goods and people. It has been apparent since the beginning that no solution exists to meeting the objectives of the “Brexiteers” (the people who wanted Brexit) and maintaining a barrier-free border. So that problem has always been insoluble and remains so today.

So there are four possibilities for what will happen on March 29:

There is no U.K. majority for any of these options, but if there is no agreement, then the default will be a no-deal Brexit. In my opinion, a way will be found to avoid this because it will be catastrophic for the economies of both the U.K. and E.U.

I had thought that the Brexit decision was final once Britain submitted its two-year notice on March 29, 2017. However, in the last few months, an E.U. court has issued an opinion that Britain can reverse the Brexit decision, provided that it does so with finality and not just to start up a new two-year negotiation. So that is an option. However, if Britain’s government invokes it, it will invoke the howls of hell from people who say that the government is violating the will of the people.

Prime Minister Theresa May’s plan, which I summarized in detail in October, is a transition plan that many consider to be the worst of all possible worlds. The whole point of why the Brexiteers wanted Brexit was to get away from the E.U. regulations, E.U. taxes, and the European Court of Justice (ECJ). In the transition period, all of these will remain, with the additional restriction that the U.K. will have to obey all the regulations and pay all the money, but will have no say in changing them. This plan is almost Karmic retribution for the idiocy of going ahead with Brexit in the first place.

However, few people like Theresa May’s plan and many pundits say that when it comes to a vote in Parliament on January 14, it is unlikely to pass.

That brings us to the last option: kicking the can down the road. It is believed that if the U.K. requested it, then the E.U. would agree to extend the March 29 date. That would give time for more debate.

Some people want to use that time to hold a new Brexit referendum. The problem with that option is that even among the few people who want a new referendum, there is no agreement on what the question would be. Would it be the same two choices as the 2016 referendum? Or would it be the three choices, something like the first three options in the list above?

So really, no one knows what is going to happen out of this mess, but my bet would be that they will find some way to “fudge,” or to kick the can down the road. Bloomberg (20-Dec) and Independent (Ireland) and Guardian (London, 17-Dec) and UK News (17-Dec)

A big increase in the number of migrants illegally crossing the English Channel from Calais, France, to Dover, England, is being blamed on the chaos surrounding Brexit. There are reports that human traffickers are telling migrants that crossing from France to Britain will be much more difficult after March 29 because of Brexit and charging the migrants €15,000 or more to cross the Channel in a cheap dinghy. At the same time, security has been toughened around ports and the Channel tunnel and authorities have been cracking down on migrants in northern France. However, there are still many more migrants who cross to Britain by stowing away on trucks that travel through the tunnel.

This is actually a fairly small number of migrants, but it has become a major political issue in Britain. It is far smaller than the number of migrants crossing the Mediterranean to Greece, where the E.U. border force has been patrolling the waters. But political pressure has forced Britain’s Home Secretary to reassign to British patrol cutters from the Mediterranean to the English Channel.

Many of the migrants are from Iran. This is believed to be the result of a policy that Serbia implemented between August and October 2017, offering visa-free travel to people from Iran for 30 days. More than 40,000 Iranians visited Serbia, but it is believed as many as 12,000 did not return home after 30 days, but instead moved through the Schengen Zone to western Europe and, in particular, to Calais, France, hoping to reach Britain.

The trip across the English Channel is 21 miles, but cross-currents can make the trip much longer. The trip can be particularly dangerous due to high seas and busy shipping lanes. If a British patrol boat captures the migrants in British waters, then they are required to take them to Britain; otherwise, the patrol boat can return them to France. When a migrant reaches Britain, he is evaluated for eligibility for asylum. Iranians are likely to be granted asylum because of Iran’s human rights record. For that reason, migrants from Iraq or Syria often claim to be from Iran. Daily Mail and Guardian (London) and Deutsche Welle