DR Congo in election chaos, as Ebola continues to spread 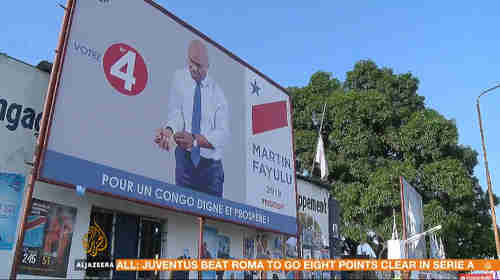 Kabila himself will not be running, since the constitution limits him to the two terms he has already served. Instead, he has a hand-picked successor, Emmanuel Ramazani Shadary. Many people believe that if Shadary wins, then he will just be a puppet with Kabila as the puppetmaster.

So Joseph Kabila’s election commission (CENI) postponed the December 23 election for a week, until December 30. The reason given is that there were not enough voting machines.

This week, there are new tactics. Kabila’s election commission said that the election will still be held on Sunday, but will be delayed until March in three cities – Beni, Butembo, and Yumbi. The reasons given for Beni and Butembo are that there are Ebola outbreaks in those cities and that voting would be “dangerous.” However, voting has not been delayed in other cities with Ebola outbreaks.

But what is special about these three cities — Beni, Butembo, and Yumbi — is that all three cities are strongholds for anti-Kabila opposition. Voting will continue as usual in other cities where there is Ebola or violence. So there are 1.2 million votes in these three cities, and there are 40 million registered voters in all of DRC. So Kabila has disenfranchised over a million opposition supporters.

Kabila cannot afford to simply step down thanks to rampant, massive corruption. Kabila and his family own, either partially or wholly, more than 80 companies and businesses in the country and abroad. He and his children own more than 71,000 hectares (175,444 acres) of farmland. His family owns diamond mines, a part of the country’s largest mobile phone network, companies that mine mineral deposits, gold and limestone, a luxury hotel, stakes in an airline, a share of the country’s banks, and a fast-food franchise. With tentacles reaching into so many businesses, it is not surprising that Kabila is willing to use any method – massacres, atrocities, jailings, torture – to stay in power. If he were out of power, he and his family and friends might well be jailed or executed.

DRC’s foreign ministry has unexpectedly announced the expulsion of European Union ambassador Bart Ouvry, saying he has 48 hours to leave in retaliation for the EU’s decision to renew sanctions against DRC officials, including Emmanuel Ramazani Shadary, who is Kabila’s hand-picked successor. As Minister of the Interior and Security, Shadary was first sanctioned in 2017 for arrests and violent suppression of Kabila’s political opposition. AP and Al Jazeera and Reuters and Africa News

Protesters angry with the postponement of Sunday’s presidential election in Beni attacked an Ebola clinic in that city on Thursday. During the attack, shots were fired, some tents were burnt down, and tables and chairs were stolen. About 21 people fled the clinic though most returned after that attack ended.

This attack is emblematic of the problems that the World Health Organization (WHO) and its partners are having in the North Kivu and Ituri provinces of DRC, where the current outbreak of Ebola continues to spread.

As of December 26, a total of 591 Ebola cases, including 543 confirmed and 48 probable cases, have been reported in the two neighboring provinces of North Kivu and Ituri. Of these cases, 54 were healthcare workers, of which 18 died. Overall, 357 cases have died (case fatality ratio 60 percent).

WHO health officials might have already ended the Ebola outbreak, but they are being prevented from doing their work by the civil war in progress, and now by the demonstrators protesting the cancellation of elections in Beni and Butembo.

In particular, the teams in Beni are unable to carry out critical field work, including vaccinations, contact tracing, and following up on alerts of potential new cases.