UAE reopens embassy in Syria to counter influence from Iran 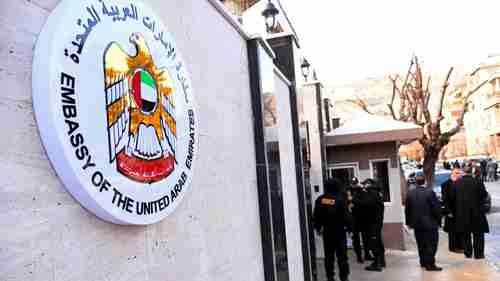 The UAE embassy in Damascus, Syria, on Thursday (AP)

In a dramatic turnaround, the United Arab Emirates (UAE) announced that it is restoring diplomatic relations with Bashar al-Assad’s government in Syria and reopening its embassy in Syria’s capital city Damascus. On Thursday afternoon, the UAE’s chargé d’affaires Abdul Hakim Naimi visited the Damascus embassy and watched the flag being raised again.

UAE’s Ministry of Foreign Affairs said that the UAE hopes to contribute to a political solution to the war:

[The reopening of the embassy] reaffirms the keenness of the UAE to restore relations between the two friendly countries to their normal course.

It will strengthen and activate the Arab role in supporting the independence, sovereignty and territorial integrity of the Syrian Arab Republic and to prevent the dangers of regional interference in Syrian Arab affairs.

The “regional interference” being referenced is thought to be interference from Turkey, Iran, and Hezbollah.

It may already be too late to “prevent the dangers of regional interference” from Iran and Hezbollah. In the past seven years, Bashar al-Assad – backed by Russia, Iran, and Hezbollah – have brought about the genocide and ethnic cleansing of vast portions of Syria’s Sunni Arab population and is repopulating the cleansed areas with Shia Muslim families from Iran and Lebanon’s Hezbollah. ( “1-Dec-18 World View — Evidence grows of Assad’s ‘final solution’, extermination of Arab Sunnis in Syria”)

Al-Assad’s Shia/Alawite Syrian army has always fought the civil war half-heartedly, with crippling defections and desertions. The army almost collapsed in 2015 until al-Assad begged for help and was saved by the massive intervention by Russia, Iran, and Hezbollah. That massive intervention continues until the present time in the form of the “regional interference” that UAE’s foreign ministry was referring to. So that is why preventing “the dangers of regional interference” may no longer be possible. The National (UAE) and Reuter and AP and The National (UAE)

Al-Assad’s massive attacks on the Sunni Arabs had several major consequences. One was that Syria was expelled from the Arab League, something that may now be reversed, beginning with the restoration of diplomatic relations by UAE.

Officials from some Arab countries are now expressing regret that Syria was expelled from the Arab League since it meant a complete loss of influence by the other Arab League members. But these crocodile tears ignore the reality of what was going on in 2011.

By August of 2011, it was becoming clear that al-Assad was conducting genocidal and ethnic cleansing attacks on Sunni Arabs and this was shocking and repulsive to the other Arab states. Arab nations stayed silent for several months, hoping that the carnage would end, but finally broke their silence in August after the Syrian army first attacked Homs and then began attacking the city of Deir Ezzor. The technique being used in each of these cities is that tanks first surround the city to prevent anyone from fleeing and then, once the city is sealed, the tanks start flattening residential neighborhoods and the snipers kill anyone on the street, even children. This is a classic ethnic cleansing technique.

Al-Assad’s actions were so shocking that the Arab League Secretary-General issued a statement strongly condemning al-Assad and Saudi Arabia and the UAE recalled their ambassadors to Syria.

Al-Assad’s ethnic cleansing continued to worsen as he attacked the El-Ramel Palestinian refugee camp in Latakia killing many women and children and shocking the entire Sunni Muslim world. By mid-November, the Arab League suspended Syria – the first such suspension since it expelled Egypt in 1979 for signing a peace treaty with Israel. To claim today that Syria should never have been expelled completely ignores the fury and chaos at the time.

The attack on the Latakia also led to the creation of ISIS. Al-Assad’s attacks drew tens of thousands of young Sunni jihadists from over 80 countries to Syria to fight al-Assad, and by 2014 they had formed the Islamic State of Iraq and Syria (IS or ISIS or ISIL) and took control of a large region of eastern Syria, with the headquarters of its Caliphate in the Syrian city of al-Raqqa, with a population over 300,000. It took a joint operation by American forces leading the Kurdish Syrian Defense Forces (SDF) to recapture al-Raqqa.

With the recent announcement by President Donald Trump that American will withdraw its troops from Syria, UAE’s decision to restore relations with Syria takes on a much greater significance and urgency than before. The American withdrawal will create a vacuum in the huge eastern part of Syria and that region might now be taken over by Iran and Hezbollah.

It is also increasing calls across the Arab world to re-admit Syria into the Arab League. With millions of Sunni Arabs slaughtered or expelled from Syria, and their homes replaced by Shia Muslim families from Iran, it now seems likely that Iran will have a great deal of influence in Syria.

The war in Syria is far from over. With American troops withdrawing, Turkey has promised to invade Syria and attack the Kurdish SDF, which might bring Turkish troops into conflict with Syrian troops.

Even worse, Idlib province in northwest Syria is currently hosting over three million Sunni Arabs. Al-Assad has vowed to regain control of Idlib, which would amount to genocide and ethnic cleansing of the three million Sunni Arabs currently living there. Idlib is a “de-escalation zone,” with Turkey responsible for maintaining the ceasefire. An attack by al-Assad could lead to a full war between Syria and Turkey. Also, it could create a new humanitarian disaster, with millions of Sunni Arabs pouring across the border into Turkey and from there into Europe, bringing back the days of 2015. The National (UAE) and Sky News and Press TV (Iran) and The National (UAE) and Al Jazeera