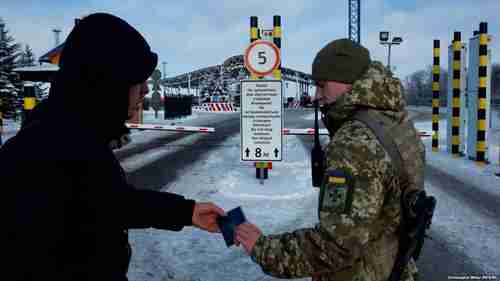 In October, Patriarch Bartholomew of Constantinople, the “first among equals” leader of all Orthodox Christian churches and of the world’s 300 million Orthodox Christians, announced that he was reversing a 330-year-old policy and would make the Kiev Patriarchate a separate Church, independent of the Moscow Patriarchate.

This infuriated the Russians, who promised revenge. This has led to pressure in Ukraine for clergy and bishops in Ukraine belonging to the Moscow Patriarchate to switch allegiance to the Kiev Patriarchate.

Recently, the intervention of the leaders of the secular Ukrainian state in church affairs has acquired the character of gross pressure on the episcopate and clergy of the Ukrainian Orthodox Church, which allows us to speak about the beginning of full-scale persecutions.

[The Peacemaker website exists with the direct support of the Ministry of Internal Affairs of Ukraine], and has previously become notorious for publishing information about Ukrainian, American and European journalists, after which they were threatened, beaten and even deprived of life.

Kirill’s plea was sent to numerous world leaders, including Pope Francis, the head of the Anglican Community to the Archbishop of Canterbury Justin Welby, the Secretary-General of the World Council of Churches O. Fuxse Tveit, and the UN Secretary-General A. Guterres, Secretary General of the Organization for Security and Cooperation in Europe T. Gremymhramhym, the President of France Emmanuel Macron, and the German Chancellor Angela Merkel as heads of states of the Normandy Four.

Kirill appealed to religious and state leaders, and leaders of intergovernmental organizations, to make every effort to protect the bishops, clergy, and believers of the Ukrainian Orthodox Church from discrimination and pressure from the Ukrainian authorities, to defend the freedom of conscience and religion enshrined in international law. Moscow Times and Russian Orthodox Church (Trans) and AP and Moscow Times

Military tensions between Ukraine and Russia are increasing

The dispute over the Orthodox Church in Ukraine comes four years after Russia’s invasion of Ukraine and at a time when military tensions are rising again.

The problem with Kirill’s plea is that Kirill is following the policies of Russia’s president Vladimir Putin and Putin lies about everything. These include lying about Russian soldiers in Ukraine, lying after Russians shot down a passenger plane with a Buk missile, lying about not invading Crimea, lying about whether Russia is going to annex Crimea, and then annexing Crimea. There are lots more lies related to Bashar al-Assad’s use of Sarin gas and chlorine gas.

So we have to assume that Kirill is just as much a liar as Putin is. Maybe bishops and clergy are being targeted with “full-scale persecutions,” and maybe they aren’t – we cannot conclude anything from anything that Kirill says.

On the other hand, Ukraine’s Security Service, the SBU, is claiming that Russians in east Ukraine are organizing church marches in numerous cities across Ukraine on Sunday to disrupt a meeting of the unification council of Ukrainian Orthodox Church. We will see if these church marches actually take place tomorrow (Sunday). Unfortunately, no one can exclude the possibility that Moscow may launch more serious military actions this weekend with the same purpose.

What is apparent is that military tensions are purposely increasing on both sides. The original Ukraine war that started four years ago has not been in the news much, but it is still continuing at a low level, with both Russians and Ukrainians being killed every week.

On November 25, Russia conducted an act of war by firing on Ukrainian navy ships in the Black Sea, boarding and seizing the ships, and blockading Ukraine’s ports at the Kerch Strait. Russia abducted the crew of 24 and apparently tortured some of them to create a video and forcing them to confess to crimes they did not commit.

Russia continues to hold and bury the 24 Ukrainian sailors, possibly in retaliation for the Orthodox Church issue, just as the Chinese have abducted and buried two Canadian journalists, in apparent retaliation for the arrest in Canada of Huawei CFO Meng Wanzhou, after a multi-year investigation revealed massive bank fraud by Huawei to violate U.S. sanctions against Iran.

On November 26, in retaliation for the Kerch Strait seizure, Ukraine’s parliament voted to implement Martial Law in ten regions of Ukraine for 30 days, in preparation for a possible new invasion by Russia.

Then, on November 30, the State Border Guard Service of Ukraine prohibited Russian men aged 16-60 from entering Russia. The reason given was to prevent Russia from sending in troops to form private armies, but the restriction played havoc with men who cross the border every day for work.

On December 1, the General Staff of the Armed Forces of Ukraine (UAF) announced short-term, 15-day training courses for reservists and members of the territorial defense forces. Window on Eurasia and Reuters and Jamestown and RFE/RL (Trans)