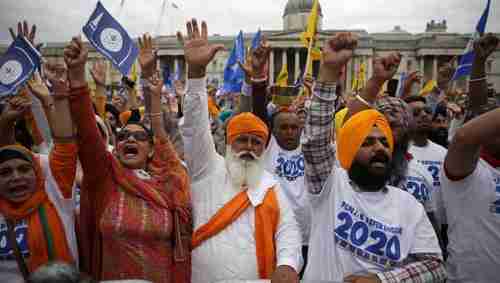 The Jammu and Kashmir Coalition of Civil Society (JKCCS), which supports the separatist militants, does not dispute those figures, but goes farther and says that 2018 was the bloodiest year for everyone in Kashmir since 2009. JKCCS says that 528 people were killed in Kashmir in 2018, of which 145 were civilians, 234 were separatist rebels, and 142 were Indian security personnel.

There are three major Pakistan-sponsored jihadist groups operating in Kashmir. Hizbul Mujahedeen (HM) is an indigenous, home-grown jihadist group that became considerably more violent after the July 8, 2016, death of HM leader Burhan Wani in a gunfight with the Indian army. Jaish-e-Mohammad (JeM) is a relatively new indigenous jihadist group. Lashkar-e-Toiba (LeT) is a Pakistan-based terrorist group that was formed in the 1990s by Pakistan’s Inter-Services Intelligence (ISI) agency to fight India in the disputed regions of Kashmir and Jammu. Hindustan Times and Al Jazeera

With India and Pakistan almost always apparently close to a state of war, with Kashmir at the epicenter, it is surprising that they can agree to anything significant. But that seems to have happened, although ulterior motives abound on both sides.

India and Pakistan have both endorsed the Kartarpur Corridor, a visa-free path that permits Indian Sikh pilgrims to visit the gurdwara (Sikh shrine) known as the Gurdwara Kartarpur Sahib, associated with the founder of Sikhism, Sri Guru Nanak Sahib Ji, or just Guru Nanak.

Politicians in both India and Pakistan have been effusive in their praise for this agreement. Prime Minister Narendra Modi of India drew parallels with the fall of the Berlin wall, declaring, “Who thought the Berlin Wall would fall. Maybe, with the blessings of Guru Nanak Dev ji, Kartarpur corridor will not only be a corridor but can be a reason to bring people together.” In a similar vein, Prime Minister Imran Khan of Pakistan, at the ground-breaking ceremony at Kartarpur Sahib, expressed the sentiment that, “If France and Germany who fought several wars can live in peace, why can’t India and Pakistan?” A number of other statements are in the same vein of intemperance, including Indian Vice President M. Venkaiah Naidu’s statement: “The corridor will become a symbol of love and peace between both countries.”

Going beyond the ebullient promises of “love and peace,” Modi has in the past refused to approve the Corridor, saying that Pakistan could use it to radicalize Sikh separatists in the Khalistan movement.

However, Modi’s change of heart was rather sudden and probably driven by domestic considerations. April 15, 2019, will be the 550th birthday of Sikh found Guru Nanak, and general elections will be held in May 2019. Refusing to open the Corridor would alienate millions of Sikhs living in India, and motivate them to vote for the opposition. South Asia Terrorism Portal (SATP – India) and The Diplomat

Guru Nanak Dev (1469-1539) founded Sikhism in the 16th century with the goal of bringing peace to India at a time when the environment heavily permeated with conflicts between the Hindu and Muslim religions. His most famous saying is: “There is no Hindu, there is no Muslim, so whose path shall I follow? I shall follow the path of God.” He was extremely charismatic. Today, there are 23 million Sikhs worldwide, making Sikhism the 5th largest religion in the world, with 19 million Sikhs living in India, primarily in the state of Punjab.

However, Sikhism did not bring peace between Hindus and Muslims in India. To the contrary, Sikh leaders began to militarize the Sikh community and Sikh military leaders captured more and more territory. In 1799, leaders declared Punjab as an independent Sikh state. This was the beginning of the “Khalistan” separatist movement. At that time, India was a British colony and British troops defeated the Sikh armies in the 1800s, decisively beating the Sikhs in 1849.

The seminal event for Sikhs in the 20th century happened on April 10-12, 1919: the Jalianvala Bagh Massacre (Amritsar Massacre). Some 10,000 Sikhs were holding a meeting protesting British colonial policies in India when British troops opened fire, killing hundreds. This event convinced everyone – the British, the Sikhs, the Hindus, and the Muslims – that Britain had to give up control of India. This led to the 1947 partitioning of the Indian subcontinent that created India and Pakistan, and to the Partition War, one of the bloodiest wars of the 20th century.

This infuriated the Sikhs and revived the Khalistan separatist movement. In October 1984, the world was shocked when India’s Prime Minister Indira Gandhi was assassinated by two of her Sikh bodyguards. Four days of anti-Sikh rioting followed in India. The government said that more than 2,700 people, mostly Sikhs, were killed, while newspapers and human rights groups put the death toll between 10,000 and 17,000.

The opening of the Kartarpur Corridor, which permits visa-free travel between Sikh shrines in Pakistan and India, raises concerns that the corridor will encourage activism among hardline Khalistan activists in India, giving rise to yet another separatist movement to add to the one by Muslims in Kashmir.

Sikh activists have already been holding rallies in London. In August, a rally for “Punjab Referendum 2020,” which calls for a Sikh referendum to encourage separatism, was attended by 2,500 expatriate Sikh hardliners, mostly from Britain. Indian officials say that the Khalistan movement may be popular in London, but it is not catching on in London.

India makes no effort to hide its irritation over allowing “a separatist activity which impinged on India’s territorial integrity and seeks to propagate violence, secessionism and hatred.” Indian intelligence agencies are wary of Khalistan radicals in London, as London was the epicenter of a pro-Khalistan movement in the 1980s. Discover Sikhism and Dawn (Pakistan, 12-July-2015) and Hindustan Times and HuffPost and Pluralism.org