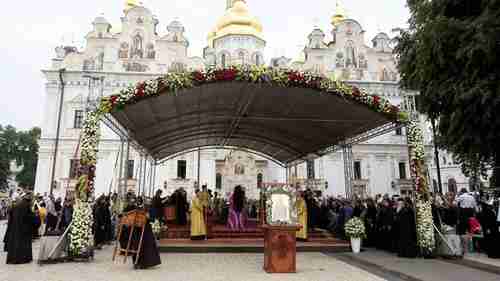 The Pechersk Lavra church in Kiev must now change its allegiance from Moscow to Kiev. There are fears that this struggle will lead to violence. (Sputnik)

Ukraine’s president Petro Poroshenko quickly hailed the decision. “This is a victory of good over evil, light over darkness,” he said, adding that Ukraine has been waiting for this “historic event” for more than 330 years.

The “330 years” refers to another part of Bartholomew’s announcement:

4) To revoke the legal binding of the Synodal Letter of the year 1686, issued for the circumstances of that time, which granted the right through oikonomia to the Patriarch of Moscow to ordain the Metropolitan of Kyiv, elected by the Clergy-Laity Assembly of his eparchy, who would commemorate the Ecumenical Patriarch as the First hierarch at any celebration, proclaiming and affirming his canonical dependence to the Mother Church of Constantinople.

In granting independence to Ukraine’s church, Bartholomew is taking control of Ukraine’s church from the Russian Orthodox Church (ROC). This has infuriated the Russians and is a political and financial disaster for the ROC and for Russia’s Patriarch Kirill, since about a third of the parishes controlled by Kirill are in Ukraine.

In anticipation of Thursday’s announcement, the ROC last month broke all relations with the Constantinople. ( “16-Sep-18 World View — Russian Orthodox Church in historic split with Constantinople over Ukraine issue”)

Thursday’s announcement is the culmination of decades of tension between Ukrainian and Russian churches since the time of the Soviet collapse in 1991. The ROC took control of the Ukrainian church, headed by Ukrainian Patriarch Filaret Denisenko, an ardent proponent of independence from the ROC. The ROC excommunicated Filaret, who formed his own unrecognized Ukrainian Orthodox Church, which is now the second largest in Ukraine.

Thursday’s announced by Bartholomew also reverses the excommunication of Filaret:

3) To accept and review the petitions of appeal of Filaret Denisenko, Makariy Maletych and their followers, who found themselves in schism not for dogmatic reasons, in accordance with the canonical prerogatives of the Patriarch of Constantinople to receive such petitions by hierarchs and other clergy from all of the Autocephalous Churches. Thus, the above-mentioned have been canonically reinstated to their hierarchical or priestly rank, and their faithful have been restored to communion with the Church.

It is now considered likely that Filaret will be chosen to lead the new Ukraine Orthodox Church.

According to Ukrainian media, a scholarly study of the history of the ROC reveals that it never received a “Tomos of autocephaly,” and therefore may itself not be a legitimate church. Constaninople Patriarchate and AFP and Russian Today and Unian (Ukraine)

Bishop Hilarion Alfeyev, spokesman for the Russian Orthodox Church, calls the decision “catastrophic,” and says, “Of course, people will take to streets and protect their sacred sites.” Hilarion in the past has warned:

If the schismatics begin to seize the laurels, thousands of people will gather, they will defend these monasteries, blood will be shed … If, God forbid, there will be a legitimization of the split, it is difficult even to imagine what consequences this can lead to. This would mean a split, similar to the split of 1054.

This alludes to the historic, bloody split between the Catholic Church, led by Rome, and the Eastern Orthodox Church, led by Constantinople, in 1054. In 1204, in a new Crusade, the Catholic army sacked sacked Constantinople, starving and murdering its citizens, and plundered the Orthodox Church’s treasures accumulated over the centuries, capping the deed by placing a prostitute on the Emperor’s throne at the church of St. Sophia, at that time the most beautiful church in Christendom. It was not until the year 2001, after facing large anti-Catholic protests in Athens, that Pope John Paul apologized to the Greeks for the incident and made a plea for forgiveness.

So Hilarion’s warning that Constantinople’s Ukraine decision is similar to the split of 1054 illustrates how furious the Russians are that this decision was made. It is expected that Kiev and Moscow are going to be fighting for control of every one of the churches affected by the decision, but whether those fights lead to violence between the parishioners remains to be seen.

Another consequence might be Russian violence against the Churches in Russian-occupied Crimea. Russia may attack these churches in retaliation for Kiev’s attempts to control the churches in mainland Ukraine. AFP and Tass (Moscow) and Unian (Kiev) and Washington Post