Violence between herders and farmers surges in Nigeria 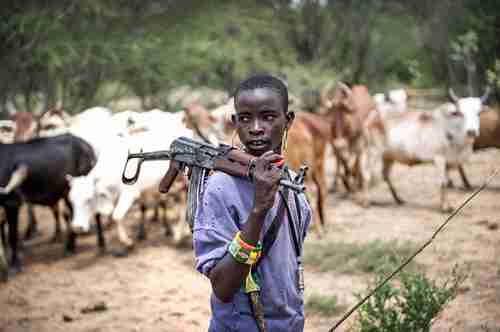 I have written frequently about ethnic violence between farmers and herders in many countries: Central African Republic, Nigeria, Rwanda, Burundi, Kenya, Sudan, South Sudan, and even America in the 1800s. The farmers accuse the herders of letting the cattle eat their crops, while the herders accuse the farmers of planting on land that is meant for grazing. If the farmers put up fences, then the herders knock them down.

In Nigeria, the problem has become so serious that it appears that more people have been killed in conflicts between farmers and herders than in the conflict with Boko Haram – or by the militancy in the Niger Delta in the south of Nigeria.

In the latest incident, in Nigeria’s northern state of Zamfara, cattle thieves killed more than 20 people, and burned down their entire village.

The incident was described on the BBC by Mary Harper, the Africa editor (my transcription):

In Zamfara state, which is in the far north of Nigeria, cattle thieves came on motorbikes into a village. Initially some vigilantes who had been set up by the local community tried to deal with these thieves who come regularly to try to steal their cattle. They managed to chase the cattle thieves away, but then the thieves came back again, and killed lots of the vigilantes, and other villagers, burned their houses down, and made off with many, many heads of cattle.

In northern Nigeria, it’s a more a conflict between settled farmers and herding communities, or it’s a criminals who basically just go into villages and attack nomads, and take their cattle. Cattle are worth a huge amount of money. There’s about 80 million heads of cattle in Nigeria – they’re a precious resource.

So in the north, because most people are Muslim, it’s more a matter of criminality. But in other parts of Nigeria, especially in the middle region, many of the farmers are Christian, and many of the herders are Muslim, so it’s being portrayed by some people as a religious conflict, even though it’s actually far more complicated than that.

The violence between farmers and herders in Nigeria appears to be getting more and more serious, and with the huge amount of money involved, the government seems helpless to do anything about it. According to Harper:

The government faces a huge challenge. It faces a big insurgency in the northeast with Islamists, militants, Boko Haram. And then in the south [in the Niger Delta], it has oil-related violence. So security forces are already very badly stretched, but at the more people are being killed in this violence related to cattle and farms, than in either the north with the Islamist insurgency, or the south. And even though they’ve deployed the military to that region, they seem unable to control it.

And often people say that the people in the government and the army are actually complicit in the problem, they’re corrupt, they’ve become part of the problem, rather than trying to solve it.

The last remark about the complicity of government being part of the problem has been a theme in several of the reports I have written about farmer versus herder violence. In particular, it has been suggested that Nigeria’s president, Muhammadu Buhari, who is a Fulani and owns large herds of cattle, has been complicit in some of the herder attacks on farmers. BBC and BBC

Nigeria’s oil-rich Niger Delta has the capacity to produce over two million barrels of oil per day, but for years militants have attacked national pipeline installations, causing national production to fall.

The militants use a practice known as “oil bunkering.” Thieves cut into the pipes, attach spigots, and divert some of the oil for their own uses. The Niger Delta is dotted with illegal refineries that produce crude gasoline, kerosene, and diesel fuel. Much of the diverted oil spills onto the ground, creating an environmental nightmare, and the reset is used or sold by the militants.

In 2009, Nigeria implemented an unconditional amnesty for militants, known as the Presidential Amnesty Program (PAP) or the Niger Delta Amnesty Program (NDAP). The program provided the militants with an income of about $180 per month, much more than the average worker in Nigeria. Approximately 30,000 people in the Niger Delta signed up for the free monthly income, although only 2,700 weapons were surrendered.

The amnesty program was supposed to last only five years, but when it was discontinued in 2015, oil bunkering surged again. It was estimated that from January to October 2016, the government lost about $5.8 million in revenue because of the bunkering. So the amnesty program, and the free monthly payments, have been restored. Today, Nigeria’s crude oil output is about 2.2 million barrels per day.

The amnesty program is seen by many as a waste of government money since it gives free money to criminals.

However, Prof. Charles Dokubo, special advisor to president Buhari, insists that the amnesty program must continue:

The alternative will be too ghastly to contemplate.

The fact is that to maintain the existing peace in the region is quite important for our function. If there’s a crisis in the region, then, basically all we are putting in place will not work.

You have oil revenue increasing and the Federal Government has some more money to pay into the amnesty program to also empower our people by training them and giving them the requisite skills to perform well in an economy that is open.

If that is done, for me, I would have achieved all that I want in the program.

However, violence has once again been increasing in the Niger Delta, so some further measures will be required. There is already a heavy Nigerian army presence in the Niger Delta, but the fact that they have been relatively ineffective leads many to believe that they are sharing in the actions of the militants. Vanguard (Nigeria) and Punch (Nigeria) and Forbes and AP (20-Jul-2013)