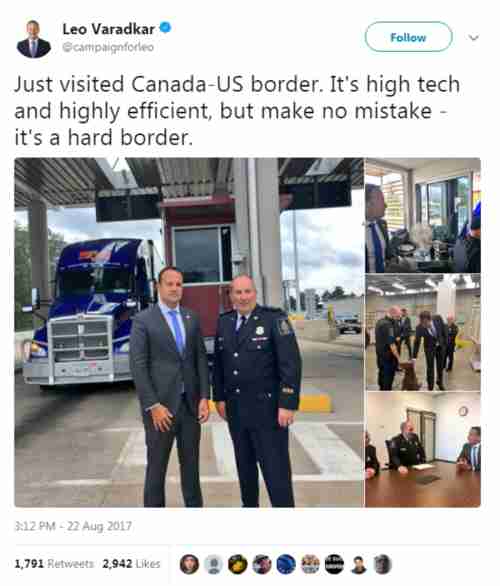 The British Parliament’s Northern Ireland Affairs Committee issued a report on Friday that came about as close to saying “the Brexit Ireland border problem has no solution” as possible, while following the unwritten political rules of never saying anything so definitive.

The Brexit Ireland border problem is the problem of the border between Northern Ireland, which is part of the UK, and the Republic of Ireland (Southern Ireland), which will remain in the EU after Brexit. If the UK is not part of the EU, then there would have to be border controls between Ireland and Northern Ireland, a concept that almost everyone rejects, because any border controls are feared likely to result in a renewal of “The Troubles,” the decades of violence between the indigenous ethnic Irish Gaelics (Catholic, Republican) and the descendants of the English and Scottish invaders (Protestant, Unionist).

The border across Ireland first appeared in 1921 as a result of the British-Irish treaty that partitioned the island and ended the Irish War of Independence. It ran across farms and villages and, following the outbreak of hostilities in the North in 1969, was reinforced with British Army watchtowers and bomb-proof and mortar-proof inspection facilities.

All of that infrastructure was removed as a result of the 1998 Good Friday Agreement that saw the Provisional IRA disarm in exchange for a new power-sharing accord that was supposed to break down some of the barriers between south and north, including the physical barrier at the border.

So everyone says they want no return to the physical barriers. Instead, they want to maintain a “frictionless border” between Ireland and Northern Ireland, meaning that cars and trucks can continue to freely cross the border in either direction, just as they can today.

But that would mean that a Spanish company that wants to ship goods to England without paying British tariffs could simply trans-ship them through Northern Ireland – that is, ship them to Ireland, send them across the “frictionless border” to Northern Ireland, and then ship them across the Irish Sea to England. Similarly, an English firm could ship goods to Spain by trans-shipping in the opposite direction, and avoid paying EU tariffs.

The main conclusions of Friday’s report from the Northern Ireland Affairs Committee are as follows:

At one point, Theresa May said, “There are many examples of different arrangements for customs around the rest of the world, and indeed we are looking at those, including, for example, the border between the United States and Canada.” However, an opponent pointed out that “There are guns and armed customs guards” on the U.S.-Canada border.

In fact, Leo Varadkar, the Taoiseach (prime minister) of Ireland, did pay a visit to the US-Canada border and tweeted:

The logic of the situation is as follows:

Theresa May has also put forth a suggestion that a “high tech” way will be found to keep the Irish border frictionless. I have never seen an explanation about how that’s supposed to work – supposedly some kind of magic device at the border would scan each car and truck crossing the border and figure out whether it contains anything that needs to be taxed.

EU diplomats last week warned May last week that the high-tech solution is unrealistic, and that she must back down.

The UK and the EU will begin three days of the next round of the delusional Brexit negotiations on Saturday. It is not expected that a solution to the Ireland border problem will be found. BBC and UK Parliament and Canadian Broadcasting (22-Aug-2017) and Guardian (London)

Despite warnings from China, Trump signs the Taiwan Travel Act

President Donald Trump on Friday evening ET signed the Taiwan Travel Act, which had passed both houses of Congress unanimously, and was sent to the President on February 28. A veto would likely have been overridden by Congress and, according to the Constitution, the Act would have become law automatically on Saturday if Trump had done nothing. Trump decided to sign it, apparently as a signal to China that he was specifically ignoring their warnings.

The Chinese embassy issued a statement:

[The Act] severely violates the one-China principle, the political foundation of the China-U.S. relationship.

China is strongly dissatisfied with that and firmly opposes it. [The United States should] stop pursuing any official ties with Taiwan or improving its current relations with Taiwan in any substantive way.

China has threatened Taiwan with a military invasion if it makes any move, by word or deed, towards independence. Arguably, it has already done that many times.

The Taiwan Travel Act makes it legal for officials from the executive branch of the US government to visit Taiwan, or to invite Taiwan’s leaders to visit Washington for official diplomatic meetings, if they choose to do so.

An official statement from Taiwan’s Ministry of Foreign Affairs (MOFA) expressed the government’s sincerest thanks for the goodwill and friendship that the United States has shown to Taiwan over the years. Taiwan News and Reuters and South China Morning Post (Hong Kong)