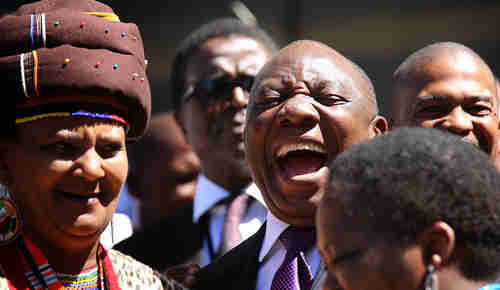 In a major shift in public opinion in support of the radical far left Economic Freedom Fighters and its leader Julius Malema, South Africa’s parliament has passed overwhelmingly a motion for a constitutional amendment that would allow the government to expropriate land from white-owned farms with no compensation whatsoever.

A year ago, a similar motion was rejected, with 261 against and 33 in favor. But on Tuesday, the vote was carried with 241 votes in favor, and 83 against. Expropriation of private land without compensation is forbidden by Section 25 of South Africa’s constitution, but the overwhelming acceptance of the motion far exceeds the 2/3 majority required to amend the constitution. This change within one year represents a radical shift in public opinion.

The successful campaign to pass the motion was led by left-wing radical Julius Malema, who was expelled from the ruling African National Congress (ANC) party in 2012, with the expectation that he would die a quick political death. Instead, he has successfully led a racially divisive campaign that has become so popular that the ANC was forced to endorse the land reform proposal, giving it an overwhelming victory.

Leading the debate in the parliament, Malena said that “it was time for justice” on the land issue:

We must ensure that we restore the dignity of our people without compensating the criminals who stole our land.

According to South Africa’s new president, Cyril Ramaphosa, who recently replaced the corrupt Jacob Zuma, taking farmland away from white farmers is necessary because of “land hunger” among blacks:

Land dispossession is a defining feature of colonialism and apartheid in SA. Land hunger among black South Africans is genuine and pressing. The time has arrived that we act decisively to resolve this matter. We must repair the damage inflicted upon our people.

The time has arrived that we act decisively to resolve this matter. We must repair the damage inflicted upon our people.

By providing more land to more producers for cultivation and by providing the necessary support, we are laying the foundation for what I would call an agricultural revolution. We are determined to work with traditional leaders to significantly expand agriculture not only to ensure food security, but also to create jobs on a significant scale and increase the value of our exports.

This is a typically meaningless political speech, full of hot air. The promise of an “agricultural revolution” is laughable.

Ramaphosa also promised that the land expropriation would only be used when the amount of food produced would be increased. This is also laughable.

What will happen is what always happens in Socialist societies. Thousands of hard-working white farmers and their families will be thrown into the streets, and their farms will be turned over to party cronies who know nothing about farming. This happened in Zimbabwe, and similar things happen in all Socialist countries. This will be a disaster for South Africa’s economy, and for all of Africa.

I have written many times what happened in Zimbabwe. It is hard to believe, but Zimbabwe used to be the breadbasket of southern Africa, growing much more food than the country needed and exporting the rest. Then, in 1999, Robert Mugabe instituted a “land reform” plan just like the one that South Africa is about to implement. Within ten years, Zimbabwe was an economic disaster, with mass starvation, a worthless currency, and massive million percent inflation.

We have seen the same thing happen in Venezuela, as Hugo Chávez and Nicolás Maduro destroyed the economy to the extent that food and medicines and even toilet paper are unavailable.

Bashar al-Assad is destroying Syria by different means – with barrel bombs, Sarin gas, and attacks with other chemical weapons, including chlorine, ammonia and phosphorous.

We now know that North Korea has been supplying components to Syria to manufacture poison gas, and it uses the money to develop nuclear weapons and long-range ballistic missiles capable of carrying the nuclear weapons to the United States, or elsewhere in the world.

And all this is going on with the support and encouragement of China, Russia, and Iran.

Julius Malema was expelled the ruling ANC in 2012 because he offended large sections of society, and has been accused of racism, sexism, and corruption. He was twice convicted of hate speech in 2010 and 2011 for inciting violence against whites.

However, he has thousands of supporters, mainly poor black South Africans who resent the history of apartheid. In 2013 he formed the Economic Freedom Fighters (EFF), which describes itself as follows on its website:

2. The EFF is a radical, leftist, anti-capitalist and anti-imperialist movement with an internationalist outlook anchored by popular grassroots formations and struggles.

5. The EFF is a South African movement with a progressive internationalist outlook, which seeks to engage with global progressive movements. We believe that the best contribution we can make in the international struggle against global imperialism is to rid our country of imperialist domination. For the South African struggle, the EFF pillars for economic emancipation are the following:

a. Expropriation of South Africa’s land without compensation for equal redistribution in use.

b. Nationalization of mines, banks, and other strategic sectors of the economy, without compensation.

There are a couple of things that are becoming clear.

First, you would have to be crazy to invest in South Africa, because any business could be subject to nationalization without compensation at any time.

Second, you would have to be crazy to give foreign aid to South Africa, since any money would just be wasted on corruption.

A country that goes down the path of nationalizing farms without compensation, with nationalization of other businesses to follow, is a country that cannot be helped. Economic Freedom Fighters online and BBC (30-Sep-2014) and South Africa History