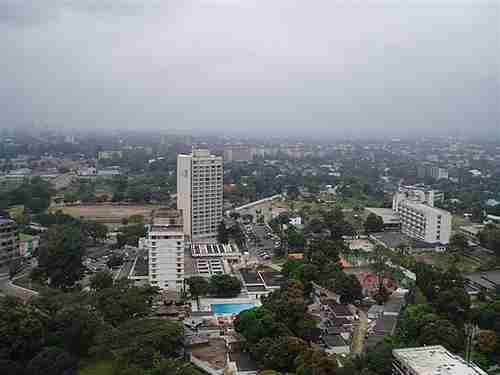 Kinshasa, the capital city of Democratic Republic of Congo, has benefited enormously from carbon emissions

The latest annual United Nations Climate Change Conference, COP23, ended on Friday accomplishing nothing but a new collection of news stories about politicians from countries around the world taking credit for climate change leadership, and expressing outrage that Donald Trump announced that he was leaving the previous climate change agreement, and thereby allowing the world to slide into planetary climate disaster.

German Chancellor Angela Merkel, in particular, has been a world leader in feigned environmental concern. Years ago, she promised to close Germany’s nuclear power plants, saying that they were too dangerous. She has repeatedly lambasted Trump for pulling out of the Paris climate change agreement.

But it now turns out that Germany is not anywhere close to meeting its CO2 emission commitments, and in fact is going backwards. Germany’s carbon emissions have not declined for nearly a decade, and in fact have been increasing for the last three years.

Germany did reduce carbon emissions in the 1990s, but even that accomplishment is dodgy. In 1991, Communist East Germany merged with West Germany to form today’s Germany. East German factories were still the same ones that the Soviets had built in the 1950s when they annexed East Germany, and by 1991 those old, creaky factories were spewing huge amounts of environmental poisons, including CO2. During the 1990s, the West Germans spent huge amounts of money to modernize the East German factories, and in doing so they reduced carbon emissions.

But those were the easy days. The commitment to close all nuclear power plants by 2022 means that Germany’s huge economy is going to depend on coal for energy, and today 40% of German energy supply is coal-based. So Merkel is going to have to do a U-turn on either nuclear-generated energy or coal-generated energy, and either way, there is no chance at all that Germany will meet its climate change commitments.

Norway is another environmental superstar that is having similar problems. Norway, with its cold, clean, crisp Nordic climate, has always appeared to be an environmental model, if you did not count the fact that it is a major producer of oil and gas, which are its most important exports.

In 2015, Norway awarded oil licenses to Statoil, Chevron and other companies, allowing them to drill for oil in Norwegian waters in the Barents Sea.

Well, Greenpeace and other environmental groups are suing Norway, saying that the awards are unconstitutional because “Under article 112 of the constitution … the Norwegian state has a duty to not hurt the climate.” According to Greenpeace:

Our goal is that the court agrees with us that licenses awarded in the Barents Sea are invalid and should be withdrawn because it violates future generations’ right to a healthy environment.

The attorney representing Norway evoked laughter in the courtroom by saying:

This is a type of constitutional activism we have not seen before and that is different from our legal tradition in Norway.

This is an American-style use of our judicial system.

It would stop all future oil licenses awarded off Norway and would imperil hundreds of thousands of jobs.

What the examples of Germany and Norway show is that the whole climate change program is a fantasy put forth by politicians for domestic purposes. Ironically, Donald Trump is the only politician willing to tell the truth. Council on Foreign Relations and Reuters

African leaders were furious at last year’s climate change conference because Donald Trump had unexpectedly won the US presidential election and said that he would pull out of the climate change agreement. Even so, United Nations Secretary-General Ban Ki-moon urged a rapid scale-up in funding for climate change programs, especially to support developing countries. “Finance and investment hold the key to achieving low-emissions and resilient societies,” he said.

So now it is a year later, and there’s another climate change conference, and African leaders are furious agai because there were plenty of promises made this week, but no commitments.

Africans claim that they are entitled to money because they are the victims of climate change. That is, the West has caused the climate change, and the Africans are suffering because of it. Augustine Njamshi from the Pan-African Climate Justice Alliance (PACJA) says:

In general, Africa has not gotten what it wanted at this Cop23. Because the discussions that matter to us, things that matter to us have been relegated to the background and all that we’re hearing is what the developed countries want, and that is not in the interest of Africa.

Africa has not contributed to this [climate change] problem, yet it’s bearing the consequences in a great way, in a massive way and we don’t have the luxury to adapt to the climate change consequences, as well as we don’t even have the means to do any mitigation.

Actually, Africa has benefited enormously from carbon emissions. At the beginning of this article, there is a picture of Kinshasa, the capital city of Democratic Republic of Congo (DRC). You can see the skyscrapers, apartment buildings, roads, cars, and other infrastructure made possible by research and manufacturing performed by the West. If it had not been for the West’s CO2 emissions, the people of Kinshasa would still be living in thatch huts and driving around in carts pulled by donkeys and camels. Africa is as responsible as anyone else is for carbon emissions because of the enormous benefits they get.

And what would happen if a huge pot of money were given to Joseph Kabila, the president of DRC, to mitigate climate change? Where would that money go? Anyone who knows anything about what is going on in Africa knows the answer. Kabila would use the money to provide support and weapons to government militias slaughtering, raping, and mutilating thousands of people in Kasai province, where 3.9 million people have already been forced to flee their homes.

I have been writing about climate change conferences for years, and it is always been clear that they have nothing to do with mitigating any climate problems. They have only one objective: To force the United States and other western countries to pay billions of dollars to leaders of “underdeveloped” countries, so that those leaders can use the money to pay their cronies, pad their bank accounts, and buy weapons to kill their enemies. I am not aware of any proposal coming out of a climate change conference that would actually reduce carbon emissions. And the examples of Germany and Norway described above illustrate this.

However, the conference did produce some good news for African leaders. According to Chinese state media:

Since 2011, Chinese government has channeled 580 million yuan (about 85 million U.S. dollars) to help other developing countries to cope with climate change, through various initiatives ranging from low-carbon and adaptation projects to capacity building activities.

China has signed 32 MOUs with 28 developing countries on the donation of materials needed in battling climate change, including over 1.2 million energy-saving or solar-energy lamps, some 13,000 solar photo-voltaic power generating facilities, and over 10,000 clean stoves, among other donations. China also donated satellite monitoring facilities to help these countries with early warning of extreme weather.

Moreover, China helped train thousands of climate officials as well as technicians from more than 120 countries on five continents, according to Xie.

The 1.2 million energy-saving or solar energy lamps donated by China should be particularly helpful to the people of Africa in mitigating the effects of climate change. At least they won’t be used to kill people. Deutsche Welle and Radio France International and Xinhua

The flaws in the climate change story

The reason that climate predictions are consistently wrong is that climate scientists simply ignore very important issues. I have tried raising these issues with client scientists, but they simply blow me off since these issues do not fit their narrative.

As regular readers are aware, Generational Dynamics predicts that the world is headed for a world war that will kill billions of people through nuclear weapons, ground war, disease, and famine. Climate scientists claim that climate change is caused by human activity, and so, the large reduction in population will completely remove whatever threat the climate scientists are predicting.

With regard to technology, Generational Dynamics predicts that the Singularity – the point in time when computers will be more intelligent, more able, and more creative than humans – will occur around 2030. Each year, we are increasingly able to see some of the components that will bring that about. Artificial intelligence is under development in every research lab in the world, and is advancing rapidly. In particular, every military in the world is doing research on robots, vehicles and aircraft that can kill enemies without human intervention. Combine all that with 3D printing, and you can imagine a world where computer entities are more intelligent than humans, can duplicate themselves, and can fight against humans.

Even if you do not believe in that scenario, there is no doubt that a great deal of new technology is being developed that can mitigate the climate change problem. Think about how much technology has been developed in the last 50 years, and think about how technology development is growing exponentially faster. With or without the Singularity, climate scientists have absolutely no clue what the temperature will be at the end of the century, because they have absolutely no clue what technology will be developed to mitigate it.