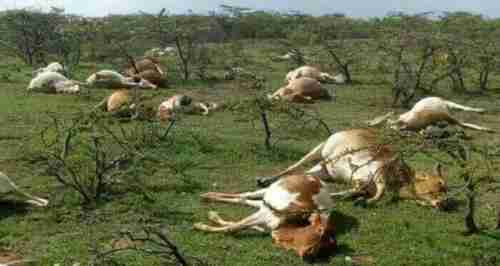 A severe drought in Kenya has in the last year resulted in increasing violence among three groups: (1) farmers and ranchers who own about a million acres of land, (2) herders (also called pastoralists) whose cattle herds have been dying of starvation and who invade ranches to find grazing land, and (3) the police whose job it is to prevent violence between the other two groups.

Pro-herder groups are accusing the police of being pro-farmer and of purposely shooting and killing about 300 cattle in the province of Laikipia on November 1. The police say that they were ambushed by about 1,000 herders who used the cattle as shields and then fired at the police, who returned fire blindly, unable to see the herders through the herd. The police also say that only 75 cattle were killed.

As an aside, this is the second time recently that I’ve heard this story. The four American soldiers who were killed in Niger were reportedly ambushed when jihadists sent a herd of cattle towards them, blinding them, and then attacked, using heavy machine guns, rocket-propelled grenades, and Kalashnikov rifles.

Although farmers and herders have generally gotten along with each other for years, the population of herders has been growing along with their herds, and the drought has led to a crisis where many herders’ families are facing starvation. The herders say that, because of the drought crisis, herders should have some controlled access to the ranches of farmers and ranchers.

This has all become linked to tribal politics in Kenya, especially with the chaos surrounding recent presidential elections. Kenya’s president Uhuru Kenyatta won reelection in the August 8 election, but Kenya’s Supreme Court agreed with the opposition that the election was “invalid, null and void” because of electoral committee irregularities and illegalities.

President Uhuru Kenyatta is from the market-dominant Kikuyu tribe, which is the tribe of wealthy landowners, farmers, and ranchers.

His opponent, Raila Odinga, is from the Luo tribe, an offshoot of the Kalenjins, who are the tribe of marginalized herders and pastoralists. Odinga says that the government should compensate the pastoralists whose livestock were killed by the police, adding:

The Supreme Court is now considering motions by Odinga and the opposition to nullify the October 26 election as well. Lawyers representing the electoral commission are asking the court to throw out the motions submitted by Odinga, and are also accusing Odinga of promoting election day violence.

In 2007, there was a presidential election where Odinga from the Luo tribe was defeated for president by another member of the Kikuyu tribe.

After the December 2007 presidential elections, there was a period of extremely bloody inter-tribal violence in the Rift Valley in Kenya, beginning early in 2008. The worst atrocity occurred when 30 people were lured into a church to escape violence, and a young gang locked the doors and set the church on fire, burning everyone alive. All in all, more than 1,200 people were killed in the tribal violence between the Kalenjins, who are mostly herders, and the Kikuyus, who are mostly farmers.

Tensions rise between Kenya and Tanzania over chicks and cattle

Kenya has launched a formal protest against the neighboring country Tanzania for auctioning off 1,300 Kenyan cattle and burning alive 6,500 Kenyan chicks.

Two weeks ago, Tanzania seized and burned alive 6,500 chicks that had been brought from Kenya into Tanzania by traders, claiming that the chicks had been imported illegally.

Then last week, Tanzania seized and auctioned off 1,300 cattle that had crossed the border from Kenya in search of grazing land.

A Kenyan official said that the act had violated historical relations between the two countries:

Kenya-Tanzania relations are longstanding, rich and complex and should not be jeopardized by a hardening of positions over minor issues that can be easily resolved through candid and open dialogue.

Those who sneak with their livestock into this country will not be spared. … Let them (Kenyans) also take similar action if cows from Tanzania are arrested in their country.

According to another Kenyan official, “This man [Magufuli] is a disgrace to East Africans. He continues to sabotage good neighborliness with his government officers harassing Kenyans over flimsy grounds.” The National (Kenya) and Capital FM (Kenya) and The Nation