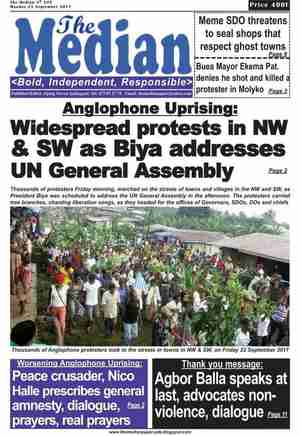 Violence in the Southern Cameroons, the Anglophone (English-speaking) region of mostly Francophone (French-speaking) country, has been increasing in intensity in recent days, as pro-separatist activists start to retaliate for the government violence that began in November of last year.

In the past few days, Anglophone activists have ambushed and killed four Francophone security personnel, in retaliation for government violence that killed dozens people since October.

Peaceful protests began late last year when Anglophone lawyers protested that the legal and court systems are biased toward Francophones, with many laws passed without even being translated into English. They were joined by teachers protesting that all courses in the schools had to be taught in French and that any use of English was forbidden. The Francophone police responded by severely beating several protesters, and shooting two of them dead.

During the past year, the Francophone government has used increasingly harsh methods to end the peaceful protests. This included shutting down the internet in the Southern Cameroons for several months, causing businesses to close and making it impossible for individuals to bank or make purchases online, in the hope that shutting down the internet would convince the separatists that Cameroon is too nice a place to separate from.

On September 22, the violence took a dangerous turn, with small explosions targeting local security forces. Starting on October 1, when the Liberation Movement of Southern Cameroons issued a symbolic declaration of independence for the state of “Ambazonia,” an increasingly violent Francophone government crackdown began. Hundreds of people were arrested, and helicopter gunships were used to fire on innocent civilians and kill them. At least 5,000 people have fled across the border to neighboring Nigeria to escape the violence. Reuters and Cameroon Concord and Guardian (Nigeria) and Today (Nigeria)

I keep writing the same story over and over about leaders using violence to stay in power forever, whether it is Pierre Nkurunziza in Burundi, Paul Kagame in Rwanda, Yoweri Museveni in Uganda, Robert Mugabe in Zimbabwe, Joseph Kabila in DRC, or, outside of Africa, Bashar al-Assad in Syria. What these leaders all have in common is that their countries had an ethnic or tribal generational crisis civil war 30 or 40 years ago, and each leader and his cronies and thugs from the same tribe have stayed in power all 30-40 years after the war ended. It is now a generational Awakening or Unraveling era, and these leaders are using slaughter, rapes, jailings, and atrocities against the other tribe to stay in power.

At the end of World War II, there was a British colony, the Anglophone “British Cameroons,” and there was a French colony, the Francophone “French Cameroun” colony. The last generational crisis war was the “UPC Revolt,” 1956-1960, which was a bloody civil war by communists attacking the French government in the Cameroun colony. The outcome was independence in 1961, when the British Cameroons colony and the French Cameroun colony were merged into a single country, and the Anglophones became a disadvantaged and marginalized minority. Today, the Anglophone regions are known as the “Southern Cameroons.”

Paul Biya was born in 1933 and became president in 1982. He consolidated his power by orchestrating a fake coup, giving him an opportunity to eliminate all his rivals, and making him, in effect, a dictator.

Biya’s government has done some really stupid things in the past year, apparently in the belief that by directing increasing violence at the peaceful protesters, they will stop peacefully protesting. Unfortunately, that is partially true, but not in the way Biya wants, since some of them turn into violent protesters.

According to Carlson Anyangwe, a retired law professor from Anglophone Southern Cameroons:

We don’t know why but when they shoot you, the body is taken away. Whether you’re dead or not, we don’t know. I’m sure if our people had arms, you would’ve heard of skirmishes between our people and the military. But because they don’t have guns or anything, they’re just protesting with their bare hands and taking the risk of being shot at and being killed.

Many people fear a full-scale civil war between the Anglophones and Francophones, but that is almost impossible right now in a generational Unraveling era, where there are still plenty of survivors of the bloody “UPC Revolt” still alive, but as these survivors die off, the level of violence is only going to increase. Mail and Guardian (South Africa) and Cameroon Concord