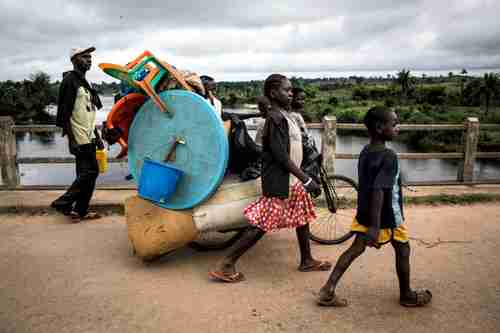 On Sunday, the electoral commission of the Democratic Republic of Congo (DRC) announced that a presidential election will be held on December 23, 2018. Unfortunately, it is hard to see this announcement as anything but a joke, although the same kind of joke seems to occur in one African country after another.

DRC president Joseph Kabila was supposed to step down on December 19 of last year, but he pulled a stunt worthy of any African leader: He did everything possible to prevent new elections from taking place and then refused to step down because there had not been any elections. There was a threat of civil war in DRC, but the Catholic Church intervened and brokered an agreement: elections would be held in December of 2017 to choose Kabila’s successor, and this time Kabila would really step down.

It was always obvious that the agreement was a farce, and that Kabila would ignore the agreement. That has, in fact, happened, because once again Kabila did all he could to prevent new elections from taking place, and now with December 2017 upon us, there will be no elections.

So now Kabila’s election commission has announced that the election will take place in December 2018. So are we going to see another year where Kabila prevents a new election and then makes some new agreement for an election in December 2019?

The norm for the leaders of many African countries is to refuse to step down, to misappropriate huge amounts of money from the treasury and from foreign aid to pay money to his political cronies and thugs to buy their loyalty, to pay money to buy weapons to be used against the political opposition, and then to target his political enemies with mass slaughter, mass atrocities, mass rapes and mass torture, in order to stay in power.

That is certainly what is happening in DRC. As we reported in July, in the 16 years he has been in office, he and his family and cronies have taken control of dozens of business, and more than 71,000 hectares (175,444 acres) of farmland, own diamond mines, a part of the country’s largest mobile phone network, companies that mine mineral deposits, gold and limestone, a luxury hotel, stakes in an airline, a share of the country’s banks, and a fast-food franchise.

If he allowed an election to take place and the opposition won, then he would undoubtedly begin to lose control of that vast wealth and might be thrown in jail for corruption. So we can be pretty certain that Kabila will not allow an election in December 2018, or ever – or at least not a rigged election. However, the Trump administration has told Kabila that an election must be held by December 2018, or international aid will be cut off.

The opposition stronghold is the central province of Kasai, where more than 3,000 people have been killed in escalating violence blamed on a government-sponsored militia. The UN has identified more than 80 mass graves and said it had found toddlers with limbs chopped off and pregnant women with their bellies sliced open, their unborn babies mutilated.

The violence has resulted in 3.9 million people forced to flee their homes to escape the violence. Hundreds of thousands have fled to Zambia, Angola, and other neighboring countries as refugees, creating a humanitarian disaster in those countries, and threatening to destabilize the entire region. Deutsche Welle and The Citizen (South Africa) and UN Human Rights Council (UNHCR) 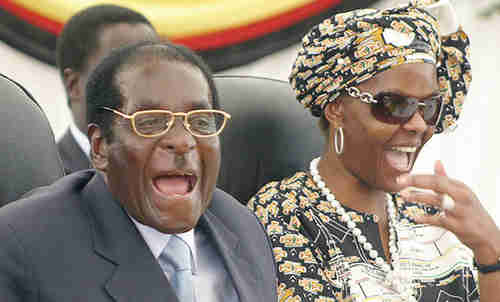 What Zimbabwe’s president Robert Mugabe is doing is just a variation of what Joseph Kabila is doing in DRC, but the intended outcome is roughly the same.

Mugabe is 93 years old and has used violence, rape, and torture to stay in power for 37 years, but even he knows that he can’t be president forever. Mugabe’s wife, 52-year-old Grace Ntombizodwa Mugabe, said this year that Mugabe would continue governing from the grave:

One day when God decides that Mugabe dies, we will have his corpse appear as a candidate on the ballot paper,

You will see people voting for Mugabe as a corpse. I am seriously telling you — just to show people how people love their president.

However, Grace now has another solution: she will replace Mugabe as president.

So on Sunday, Mugabe fired vice-president Emmerson Mnangagwa, clearing the way for his wife Grace to become vice president, and then succeed him as president.

Mugabe is from the Shona tribe, and in the early 1980s, he launched a massive genocide and ethnic cleansing campaign against his traditional tribal enemies, the Ndebele tribe. During that campaign, known as Operation Gukurahundi, accomplished with the help of training by North Koreans, tens of thousands of people, mostly from the Ndebele tribe, were raped, tortured and slaughtered.

In 1999, Mugabe adopted his “indigenization” program. At that time, Zimbabwe was considered the breadbasket of Africa, second only to Kenya in food production. Mugabe threw all the white farm owners out of the country and turned the farms over to his incompetent cronies and thugs in the Shona tribe. By 2003, Zimbabwe was starving, and the number of Zimbabweans dying of starvation continued to grow. By 2008, the official rate of inflation was 231 million percent. ( “24-Feb-2014 World View — Mass murderer Robert Mugabe of Zimbabwe has 90th birthday”).

So Kabila and Mugabe are cut from the same cloth: destroying the economy with massive corruption and using massive slaughter, rape, and torture to stay in power. But whereas Kabila used the trick of preventing elections in order to stay in power, Mugabe is using the trick of getting his wife to replace him, and effectively rule the country from his grave. Once again, it is hard to see this as anything but a joke.

Unfortunately, we have seen the same sort of thing in one form or another in other African countries, including South Sudan, Burundi, Uganda, Rwanda, Cameroon, and Eritrea, as well as in non-African countries, including Syria and Thailand. The methods vary, and the levels of violence vary, but the outcomes are always the same: to keep the élites in power by any means possible. Reuters and Guardian (London) and The Herald (Zimbabwe) and AFP (18-Feb-2017)