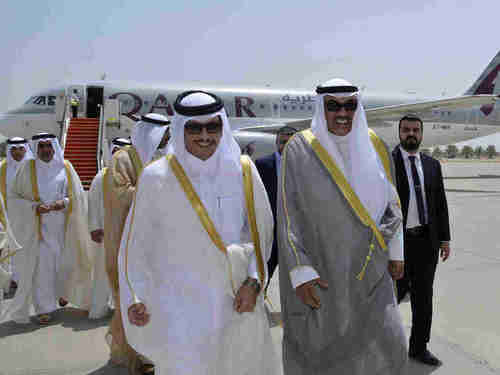 Sunday was the original deadline set by the four countries Saudi Arabia, United Arab Emirates (UAE), Bahrain, and Egypt for Qatar to meet the 13 demands that these four countries say must be met in order for the June 5 land, sea, and air blockade of Qatar to be lifted. The blockade has split the Gulf Cooperation Council (GCC), a group of Arab nations (Bahrain, Kuwait, Oman, Qatar, Saudi Arabia and the United Arab Emirates (UAE)) on the Arabian Gulf.

However, at the request of Kuwait’s 88-year-old emir ruler, Sheikh Sabah Al Sabah, the four countries have agreed to extend the deadline for two days, until Tuesday. Sabah has been trying to mediate an end to the crisis, as he did in another dispute in 2014 among the same parties.

The demands listed by the Saudi-led four-nation bloc include: sever most ties with Iran; sever all ties to the Muslim Brotherhood; shut down al-Jazeera; terminate Turkey’s military presence in Qatar; pay reparations and compensation for loss of life and other, financial losses caused by Qatar’s policies in recent years.

Saudi Arabia has stated that the 13 demands are non-negotiable. Qatar has said that the demands are so harsh that they “were meant to be rejected.” Some reports indicate that there’s been a slight softening of positions on both sides, thanks to Kuwait’s mediation, but that the two sides are still very far from agreement.

According to one analyst:

The thirteen demands… are viewed [by Qatar] as crossing all sorts of lines and essentially would see the surrender of Qatari sovereignty.

This is not something Qatar is going to adhere to, whether the deadline is today, in two days’ time or a week’s time. [The extended deadline is] a way in which Saudi Arabia and the United Arab Emirates can appear to be not as inflexible as their demands make out.

Qatar has particularly said that under no circumstances will al-Jazeera be shut down. Turkey’s deputy prime minister Numan Kurtulmus ridiculed the list of demands, and said that Turkey has no intention to shut down its military base in Qatar: “Turkey’s base in Qatar is not just about Qatar’s security it is about the security of the region.”

However, Mark Wallace of the Washington-based Counter Extremism Project says that Qatar harbors terrorists and is a funder of extremist groups: “Qatar has a long history of providing support for extremism and terrorism, including but not limited to vast financial and material support to internationally designated terrorist groups and willing accommodation of internationally designated or wanted terrorist leaders and financiers.” Radio France Internationale and Reuters and AP and Politico

Qatar officials and supporters are claiming that Qatar is handling the blockade and sanctions fairly effortlessly. Qatar’s only land border is with Saudi Arabia, and that has been closed by the blockade, but Qatar’s stores are well-stocked with food and other consumer items that have been imported from Iran and Turkey, who have been supporting Qatar.

Furthermore, Qatar is an extremely wealthy country, with a great deal of foreign income coming from oil and gas industries. Qataris point out that the hundreds of billions of dollars in its sovereign wealth fund would cover more than a decade of imports from Iran, Turkey and other countries, even though there have been significant prices increases on groceries and other consumer items.

However, Saudi Arabia, UAE, Bahrain, and Egypt are planning to meet on Wednesday to discuss additional steps to take, including new sanctions. Saudi-based economist Hussein Shobokshi says that the new sanctions will be a “terrifying tsunami” for Qatar’s economy. They potentially include the following:

According to Shobokshi, “Any Qatari funds, direct or indirect, public or private, are not welcome in these countries.”

If the GCC counties pull their deposits out of Qatar banks, it may trigger a panic on Qatar’s riyal currency. In fact, the first signs of this have already appeared: Several British banks have stopped dealing in riyal currency at all, for fear that a panic will cause the riyal to go into free fall, leaving the banks with big losses on their holdings of the currency. These banks include Barclays, Lloyds Bank, Royal Bank of Scotland and Halifax Bank. The Peninsula (Qatar) and Asharq Al-Awsat (London) and The Peninsula (Qatar) and The National (UAE) and Reuters

On Tuesday morning local time, as this article is being posted, North Korea launched what appeared to be a new ballistic missile test.

South Korea’s new president Moon Jae-in had hoped to resolve the North Korea nuclear missile crisis by means of peaceful negotiations, but Moon’s Pollyannaish hopes keep getting disappointed by North Korea’s actions, which make it clear that North Korea is not interested in any negotiations. Many analysts believe that North Korea will be able to deliver a nuclear weapon to American mainland soil within a year or two. Yonhap (Seoul)