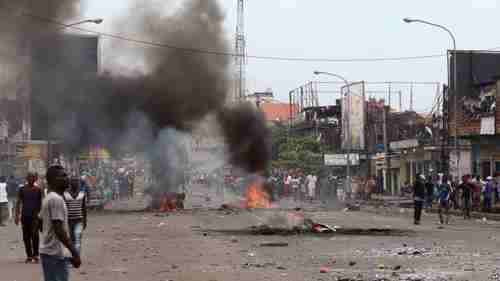 This month, the US and the European Union imposed sanctions on high-level officials in the government of president Joseph Kabila of the Democratic Republic (DRC), in reaction to numerous atrocities and war crimes committed by Kabila’s government.

Besides war crimes, one of the reasons for the sanctions is that Kabila, who has been in power since 2001, is refusing to step down, despite the fact that his latest term in office expired in December of last year.

Kabila pulled a mind-boggling stunt. He claims that he cannot step down because there have not been any elections to select a president to replace him. There were supposed to be elections in November but they were not held, because Kabila had done everything in his power to make it impossible to hold elections.

In December, there was a threat of civil war in DRC, but the Catholic Church intervened and brokered an agreement: Elections would be held in December of 2017 to choose Kabila’s successor, and this time Kabila would really step down. However, the agreement was a farce: It was signed by members of Kabila’s government, but it wasn’t even signed by Kabila himself.

It is now June 2017, and it is pretty clear that Kabila has no intention of stepping down this. In fact, he is denying that there is any agreement at all:

I promised nothing at all, I want to organize elections as quickly as possible … We want perfect elections, not just elections.

Of course, he is right that he promised nothing at all: He never signed the farcical agreement brokered by the Catholic Church.

And no, he is saying that it will cost $1.8 billion to hold the election this year, but that money cannot be spared (presumably because he has to pay his army to massacre people in the opposition). So now he says that maybe there will be elections sometime in 2018.

Presumably, he would like the West to give him $1.8 billion to hold elections, but the norm in Africa is for leaders to take aid money and use it to build a mansion for themselves, put it into the leader’s Swiss bank account, or, most likely in this case, use the money to kill more people in the ethnic tribes he hates. Despite untold billions of dollars given in aid to African countries for decades, the African people are still in the same level of poverty as they were decades ago, since these leaders make sure that the aid money is never actually used for aid.

Kofi Annan, the anti-American former Secretary-General of the United Nations issued a statement, signed by other former African national leaders, is warning that Kabila’s actions are destabilizing the region, and possibly all of Africa:

As African leaders committed to democracy, we are deeply concerned about the political situation in the Democratic Republic of Congo (DRC), which represents a threat to the stability, prosperity and peace of the Great Lakes region, and indeed for Africa as a whole.

We feel obliged to sound the alarm before it is too late.

The failure to organize elections in late 2016, in conformity with the constitution of the DRC, has created an acute political crisis.

The agreement between the Government and the Opposition reached on New Year’s Eve under the aegis of the Conference of Bishops (CENCO) averted a disaster, but its implementation faces increasing difficulties that jeopardize the process intended to lead to peaceful elections this year.

Both the spirit and the letter of the agreement are not being respected thereby endangering a non-violent political transition, which we believe is vital for the future stability and prosperity of the DRC.

Elections with integrity are the only peaceful strategy possible for resolving the crisis of legitimacy besetting the Congo’s institutions.

Based on a new report by the Catholic Church, the Zeid Ra’ad al-Hussein, the chief of the UN Human Rights Council (UNHCR), accused authorities in the Democratic Republic of Congo (DRC) of mass atrocities against people in the Luba and Lulua ethnic tribes in Central Kasai province in DRC:

The humanitarian and human rights situation has deteriorated dramatically [over the last three months] and various actors are fueling ethnic hatred, resulting in extremely grave, widespread and apparently planned attacks against the civilian population in the Kasais…

I am appalled by the creation and arming of a militia, the Bana Mura, allegedly to support the authorities in fighting the Kamwina Nsapu (rebels), but which has carried out horrific attacks against civilians from the Luba and Lulua ethnic groups…

Refugees from multiple villages… indicated that the Bana Mura have in the past two months shot dead, hacked or burned to death, and mutilated, hundreds of villagers, as well as destroying entire villages.

Unrest in the DRC capital Kinshasa turned violent on September 16 of last year, when DRC’s electoral commission failed to launch the constitutionally-required presidential election process, making it evident that president Joseph Kabila had no intention of holding elections and stepping down.

By the time that Kabila’s term in office ended on December 16, there was a growing civil war that was temporarily slowed by the agreement previously mentioned brokered by the Catholic Church that Kabila didn’t even sign.

Kabila’s greatest opposition stronghold is in the Central Kasai province, among the Luba and Lulua tribes. Tribal chieftain Kamwina Nsapu was killed in August of last year, resulting in the formation of the Kamwina Nsapu anti-government insurgency. By January, 216,000 people had been displaced, and more than 400 killed, and the unrest and violence have been spreading to other regions.

So the DRC government created the Bana Mura militia to police the Luba and Lulua tribes in Kasai province, but they’re now accused of committing mass atrocities, including killings, rape, and torture.

The Democratic Republic of Congo is an enormously large, almost the size of one-fourth of the United States. It’s a country on multiple generational timelines. In particular, the violence in eastern DRC is on a different timeline, closely related to the Rwanda genocide, than southern DRC, containing the Kasai region.

United Nation officials are concerned that the unrest in Kasai is going to turn into a full-scale civil war. From the point of view of Generational Dynamics, this is a growing possibility, but not the most likely outcome at this particular time.

After the decolonization of Belgian Congo, the Republic of Great Kasai declared its independence on June 14, 1960. On August 8, 1960, the autonomous Mining State of South Kasai was proclaimed with its capital at Bakwanga (present-day Mbuji-Mayi).

The Congo became independent on June 30, 1960. During a bloody four-month military campaign in which thousands of civilians were massacred, troops of the Congolese central government re-conquered the Kasai region and ended the South Kasai secession.