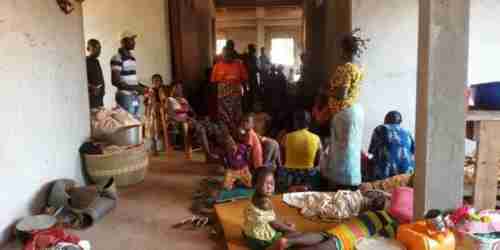 Since then, United Nations peacekeeping forces have been usually able to keep the two sides apart within Bangui, the nation’s capital. But CAR is a huge country, and sectarian atrocities with Christian anti-Balaka militias massacring and committing atrocities against Muslim Séléka people, and vice-versa, has continued and grown across the country, especially in rural areas that are completely out of reach of UN peacekeeping forces.

In March, I reported on tribal violence in Bambari and Bria, in the center of the country. What was different about that situation is that the fault lines were more ethnic than religious: farmer tribes and herder tribes are aligning against each other, sometimes ignoring religion. New reports indicate that violence in that region continues, despite efforts by UN peacekeepers.

Now there are reports of major new and growing violence in and around the town of Bangassou, a border town in southeastern CAR on the border with the Democratic Republic of Congo (DRC). Armed anti-Balaka militias attacked Muslim neighborhoods, killing dozens of civilians in several villages.

According to the UN High Commissioner for Human Rights Zeid Ra’ad Al Hussein, violence is spreading and growing in rural areas in the southeast, center and western portions of CAR:

Violence and rising tensions are spreading to areas of the Central African Republic that had previously been spared the kinds of terrifying violence seen in some other parts of the country – this is highly worrying and should set off loud alarm bells.

The hard-earned relative calm in Bangui and some of the bigger towns in CAR risks being eclipsed by the descent of some rural areas into increasing sectarian violence, with defenseless civilians – as usual – paying the highest price.

From the point of Generational Dynamics, none of this is surprising. As I’ve explained in the past, CAR’s last generational crisis war was the 1928-1931 Kongo-Wara Rebellion (“War of the Hoe Handle”), which was a very long time ago, putting CAR today deep into a generational Crisis era, where a new crisis civil war has already started.

The United Nations officials hope that by sending a few hundred peacekeepers here and there, they can get the entire country to go back to the way they were in 2013, but that’s not the way generational crisis wars work. This war has to expend a great deal more violence before it can end and, like every generational crisis war, will not end until there’s some kind of explosive genocidal climax that will be remembered for decades, or even centuries. UN Office of Human Relations and Relief Web and Reuters and Anadolu

Thousands of families have been running from the violence in the border town Bangassou in southeastern CAR, and fleeing into northern Democratic Republic of Congo (DRC). Concerns have been raised because there is a new outbreak of the Ebola virus in a remote DRC region about 250 km from the CAR border, and it’s feared that some CAR civilians might become sick and carry the virus back to CAR, where it could spread rapidly.

As of Monday’s situation report, the World Health Organization (WHO) has identified 19 cases of Ebola in the northern region of the DRC, with 3 deaths. The DRC strain is the deadliest known, more deadly than the Ebola strain that spread through western Africa two years ago. The WHO hopes that the lessons learned from the last epidemic will be successfully used to prevent a new epidemic. Already, emergency plans are being set up in airports to prevent the spread from country to country.

This is the eighth outbreak of Ebola virus since it was discovered in the DRC in 1976. Center for Infectious Disease Research (CIDRAP) and Independent (South Africa) and Vanguard (Nigeria)