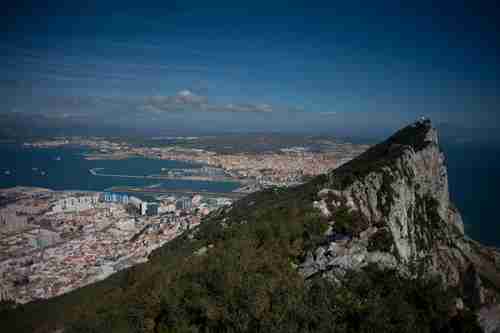 Rock of Gibraltar with Spain the background (AFP)

Few people doubt that the surprise passage of Britain’s “Brexit” referendum, directing that the United Kingdom of Great Britain and Northern Ireland should withdraw from the European Union after being a member since 1975, will cause a great deal of political chaos in the next few weeks and months. Pro-Brexit politicians claim the chaos is only temporary, and it will soon settle down, and the result will be better for the UK.

Nigel Farage, leader of the right-wing pro-Brexit Ukip party, said exuberantly, “Let June go down in history of our independence day!” Others pro-Brexit politicians shouted, “We’ve taken our country back!”

From the point of view of Generational Dynamics, the wish that the chaos will end is fantasy. The “financial crisis” of 2007-2009 set in motion generational forces that have caused the chaos to increase every month, every year. That’s true in Europe, with the euro crisis, the migrant crisis, and the Ukraine crisis; it’s true in the Mideast, with the Arab Awakening, the Syria war, the Yemen war, the rise of ISIS, the collapse in Iran-Saudi Arabia relations, and the meltdowns in Libya and Egypt; and it’s true in Asia with China’s belligerence in the East and South China Sea. This is worldwide trend that’s been growing for a decade, and in this generational Crisis era, it’s literally impossible for the growth in chaos to stop.

As I’ve been writing for years, nationalism, racism and xenophobia have been growing in countries around the world, as they do in every generational Crisis era. All these factors played into the surprise Brexit vote, in the form of anti-German, anti-French and anti-migrant sentiment. Furious voters wanted to get revenge against the élite in both the UK and the EU and “send a message” that they’re not going to take it anymore. There have been some reports of “buyer’s remorse” — that at least some of the pro-Brexit voters wanted to send a message, but didn’t really want to leave the EU. Nonetheless, the deed appears to be done.

So the pro-Brexit people who expect the EU and the UK to settle down into a non-chaotic “new normal” are making major misjudgments. They’re especially overlooking the following: Just as they were angry, just as they were expressing their nationalism, racism, and xenophobia, just as they wanted revenge, the people who lost are also angry, and also will want to get revenge by expressing their nationalism, racism, and xenophobia.

If you were to ask a UK or EU politician whether any of the events in the above list are likely to happen, he would tell you, “No, no chance whatsoever!” However, if you had asked a UK or EU politician a few months ago (or even a few days ago) whether the UK would leave the EU, you would have gotten a similar response.

As I like to point out, almost every day, something new happens that a few years ago you would have to have been crazy to believe would ever happen. Whether it’s in America, Europe, Africa, the Mideast or Asia, things that could never happen are happening.

In fact, every one of the items listed above is quite reasonable, once you realize how angry, how nationalistic, and how xenophobic people have become in many countries. That anger could be translated into anything from an election referendum to a war in a matter of days.

The European Union was formed after two world wars and the Great Depression. Institutions were put into place with the specific purpose of preventing a new war between European nations, and preventing the financial abuse that led to the Great Depression. Today, with the survivors of World War II gone, anger, nationalism, xenophobia, and stupidity are back in full force.

I can’t tell you which of the above events will actually happen, but I would be very surprised if none of them happened. At the very least, expect more chaos, and one new crisis after another. Guardian (London) and Reuters and BBC and Vox and TRT World (Istanbul)

A global stock selloff occurred on Friday, following the Brexit vote. The plunge began in Asia, spread across Europe, and then to North America. The Dow Jones Industrial Average fell over 600 points. Britain’s sterling currency fell 10% against the US dollar, to its weakest value in 31 years. Money poured into safe havens, notably US Treasury bonds. The demand for the bonds increased their prices, which therefore lowered their yields (interest rates) dramatically.

The question is: What happens next? Will stock prices continue to fall when the markets open again on Monday? Are we in a stock market crash?

First off, we have to say that it’s possible. As regular readers know, Generational Dynamics predicts that we’re headed for a global financial panic and crisis. According to Friday’s Wall Street Journal, the S&P 500 Price/Earnings index (stock valuations index) on Friday morning (June 24) was at an astronomically high 24.22. This is far above the historical average of 14, indicating that the stock market bubble is still growing, and could burst at any time. Generational Dynamics predicts that the P/E ratio will fall to the 5-6 range or lower, which is where it was as recently as 1982, resulting in a Dow Jones Industrial Average of 3000 or lower.

So when we say that “it’s possible,” we mean that there might still be some sort of panic next week, but a real crash would take place over a longer period of time.

The way it works is through forced selling. What happened in 1929 is that investors had borrowed money (on margin) to purchase stocks. When the price of stocks bought on margin start to fall, then the stock broker gives the investor a “margin call,” which means that the investor has to come up with more money. This usually means selling some stock, and if a lot of investors are forced to sell, then stock prices fall again, and there’s a vicious cycle of stock prices falling, margin calls, stock selling, stock prices falling, and so forth. This can go on for years, and it did from 1929-1932.

To this day, nobody knows what triggered the panic of 1929, and there’s certainly no way to tell what will trigger the next panic, or whether Brexit will do so.

What we do know is that the current stock market bubble will burst, because every bubble in history always has, despite claims that “this time it’s different.” So it’s possible that Brexit will be the trigger that causes the current global stock market and credit bubble to burst.

So it’s possible that enough investors were caught by surprise and a new vicious cycle will occur. It has to happen sometime, and it may or may not be now.

However, there’s one other thing we know. Central banks around the world are well aware of this vicious cycle possibility, and reports indicate that they’re “printing money” and pouring into the markets in order to head off exactly this kind of vicious cycle. The Bank of England, European Central Bank and the People’s Bank of China have already said they were ready to provide liquidity if needed to ensure global market stability. However, one sign that they’re running out of the ability to do that is the huge amount of debt based on negative interest rates. ( “15-Jun-16 World View — German 10 year bund yield goes negative, as deflationary spiral continues”)

So maybe the central banks will succeed this time or maybe they won’t. We’ll have to wait until next week to find out. Reuters and Washington Post and CNBC and AAP