In a reversal, Obama allows US troops in Afghanistan in combat roles 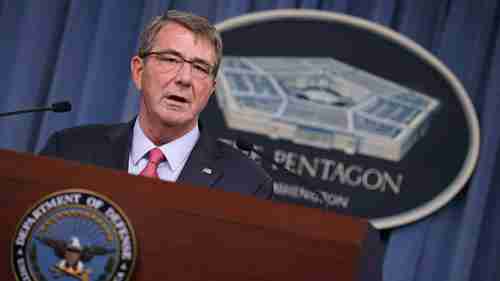 In a significant reversal of policy, President Barack Obama’s administration will now all American soldiers to fight alongside Afghan troops in combat situations, and will allow close air support in combat. Secretary of Defense Ash Carter confirmed the change in policy, and said,

This is using the forces we have… in a better way, basically, as we go through this fighting season, rather than being simply reactive. This makes good sense. It’s a good use of the combat power that we have there.

By “fighting season,” Carter is referring to the fact that the Taliban are most active during the summer months.

The change in policy comes one day after John Sopko, appointed by Obama as Special Inspector General for Afghanistan Reconstruction (SIGAR), said that the situation in Afghanistan is continuing to deteriorate:

The bottom line is too much has been wasted in Afghanistan. Too much money was spent in too small a country with too little oversight. And if the security situation continues to deteriorate, even areas where money was spent wisely and gains were made, could be jeopardized.

He said the planned drawdown of U.S. troops could compound the reconstruction effort’s problems and add to the amount that already has been wasted, which he estimated is in the billions of dollars.

Since the end of 2014, US forces have been in Afghanistan only in an “advisory” role, and were only authorized to hit Taliban targets for defensive reasons, or to protect Afghan troops. The change in policy appears designed to stop the deterioration of the situation in Afghanistan. Afghan Defense Ministry spokesman Dawlat Waziri said:

Our army is capable of fighting, the only thing we need is air support. We welcome this decision from America and it will boost the morale of the Afghan army.

The Afghan army may be capable of fighting, but with the US restricted to an “advisory” role before now, the Afghan army has been losing to a resurgent Taliban.

According to Obama’s original timetable, all US troops should have left Afghanistan by now. Obama has been forced to reverse himself several times, and there are currently 9,800 US troops in Afghanistan. The schedule calls for a reduction to 5,500 troops as the president leaves office in January, but this reduction is opposed by many military analysts and by the Afghan government. The Hill and AFP and AP and Reuters

Change in policy was resisted because of political implications

According to reports, the Obama administration had been debating this policy for months because it had been requested by military generals, but vetoed for political reasons for fear of damaging Obama’s legacy. During the 2008 campaign, Obama criticized his predecessor, George Bush, for being at war, and promised to end the wars in Iraq and Afghanistan.

But he has botched that commitment in both countries, and the NY Times has noted that as of May 6 of this year, President Barack Obama officially became the U.S. president to have been at war the longest — longer than Lyndon Johnson, longer than Abraham Lincoln and certainly longer than George W. Bush. Obama is virtually certain to be the only U.S. president to spend a full eight years at war.

In interviews earlier this year, all three of Obama’s former secretaries of defense confirmed that the Obama administration ignored military advice, and made military decisions based on inexperience and ideology. This criticism is not ideological. I’ve been following these issues for years, and non-partisan military analysts have always been overwhelmingly critical of Obama’s decisions, rarely if ever defending them.

Former defense secretary Robert Gates wrote in his book, “Duty: Memoirs of a Secretary at War,” that Obama “doesn’t believe in his own strategy, and doesn’t consider the war to be his. For him, it’s all about getting out.” Instead of getting out of Iraq and Afghanistan, what Obama is discovering is that basing military decisions purely on politics and left-wing ideology is a sure way to get in deeper. Daily Caller and Washington Post (7-Jan) and Daily Caller (7-Apr)