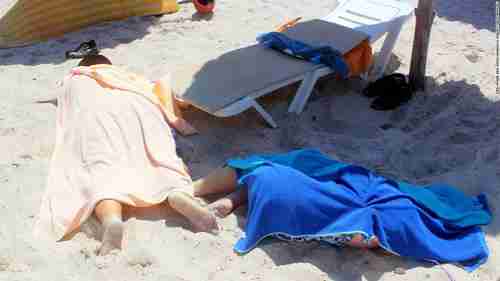 Dead bodies on the beach after terrorist attack in Tunisia (CNN)

The al-Qaeda linked terror group al-Shabaab attacked an African Union base in the village of Lego in Somalia, killing dozens and taking complete control of the village and the region. The base is part of the Amisom peacekeeping force.

The dawn raid started with a suicide bomber driving a car loaded with explosives into the entrance of the base, and then dozens of militants armed with machine guns and rocket-propelled grenades began their assault.

According to an al-Shabaab spokesman, “The Black Islamic flag is flying over the main base of Amisom in Lego this morning and the dead bodies of the enemy are scattered around the area, the mujaheddin fighters have taken all their military supplies.”

Al-Shabaab had previously promised to step up its attacks during the holy month of Ramadan. AP and AFP

The terror group “Najd Province” claimed responsibility for a suicide bombing attack on the Imam Sadiq Mosque in Kuwait’s capital city, Kuwait City, during Friday prayers, killing 27 people and wounding over 200. The terrorist wore a white robe that concealed the bomb, and was not prevented from entering the crowded mosque.

The name “Najd Province” refers to the central region of Saudi Arabia where the ultraconservative Sunni ideology of Wahhabism originated. It claims to be an affiliate of the Islamic State (IS or ISIS or ISIL or Daesh). The group also claimed responsibility for bombing attacks at two Shia mosques in Saudi Arabia in late May, killing 26 people.

Kuwait is a predominantly Sunni Arab nation, where 1/3 of the population is Shia.

ISIS has been openly promoting a sectarian war between Shias and Sunnis, and the attacks on Shia mosques are meant to trigger that war. KUNA – Kuwait News Agency and AP

France in shock after beheading and attack at US-owned factory

So it is certain that Friday’s attack on the US-owned Air Products factory is going to inflame the French people’s anxieties and lead to demands for further action for protection from terrorists.

The suspect, Yassin Sahli, accelerated the van he was driving and rammed it into a warehouse containing canisters of acetone, liquid air and gas, resulting in an explosion that was seen miles away. The explosion killed two people.

What was particularly grisly about the attack was the discovery of a severed head hanging from a fence after the blast. There were two black flags with Islamic writing hanging near the victim’s head. The decapitated body was found later in the suspect’s van.

The suspect was recognized as working for a delivery service that made regular deliveries to the factory, so he was never questioned on arrival. The decapitated body was that of his boss at the delivery company.

The suspect has been married for ten years, and has three children. His wife and sister have also been arrested. France24 and CNN

A gunman disguised as a tourist opened fire at a Tunisian hotel in Sousse on Friday, killing 37 people. According to some reports, he arrived at the beach in a boat, and hid his weapons in an umbrella. He removed the weapon, a Kalashnikov assault rifle, from the umbrella and strolled through the hotel grounds, opening fire at the pool and beach, reloading his weapon several times and tossing an explosive.

ISIS claimed responsibility for the attack. In a tweet, a spokesman said: “Our brother, the soldier of the Caliphate, Abu Yihya al-Kairouni, reached his target the Imperial hotel despite the security measures.”

As in the case of France, shocked Tunisians are just barely recovering from a previous terror attack, at a museum in the capital city Tunis in March. ( “19-Mar-15 World View — Beneath the surface, Tunisia is a terrorist breeding ground”) Friday’s attack was the worst terrorist attack in Tunisia since 2002.

It is thought that ISIS is targeting Tunisia because Tunisia is the major success story of the “Arab Spring,” which actually began in Tunisia in 2011. However, unlike other Arab countries, Tunisia has been a successful secular democracy. The terror attack actually targets Tunisia’s tourist industry, which accounts for 15% of its GDP and most of its foreign currency revenues. BBC and Reuters

Some commentators are describing Friday’s attacks as a further Muslim attack against the West, but it is very hard to find much evidence of that. The attack in Tunisia targeted Tunisia’s tourist industry, even though most of the victims were European tourists. The attack in France is ambiguous because the suspect killed his boss, so it may have been motivated by workplace violence rather than by ideology. However, the attacks in Kuwait and Somalia were clearly targeted at other Muslims.

Other commentators are wondering if all four attacks are coordinated by ISIS, and there is a little evidence of that, though not much. ISIS has made a general call for more terror attacks during the holy month of Ramadan, especially on Fridays, when the mosques are packed for Friday prayers. Al-Shabaab has made a similar call. So it is possible that the four attacks were not coordinated, but coincided because of the opportunity of the first Friday in Ramadan. At any rate, ISIS claimed credit for only the attacks in Kuwait and Tunisia, and al-Shabaab is al-Qaeda linked, not ISIS linked.

Finally, many commentators are confused about why ISIS would want to trigger a sectarian war between Sunnis and Shias. I’ve explained this many times, but now is a good time to repeat it.

For the west, the major generational crisis war of the last century was World War II. Almost every policy of almost every Western government has been a reaction to something that happened during WW II. It’s significance cannot be overestimated.

However, WW II was NOT the most significant war to the Muslims in the Mideast. For them, the generational crisis wars were the collapse of the Ottoman Empire around 1920, along with associated wars such as Iran’s Constitution Revolution in the 1900s, and then Iran’s 1979 Great Islamic Revolution, along with associated wars such as the Iran/Iraq war, Syria’s civil war and Lebanon’s civil war, all in the 1980s. Those two groups of wars were far more significant in the Mideast than World War II, and almost every policy of almost every Mideast country has been a reaction to something that happened during those wars.

For ISIS, and previously for al-Qaeda, the most significant war was Iran’s 1979 revolution, which threw out a secular government and replaced it with a hardline Shia near-dictatorship. For Sunni jihadists, this is the dream war that they want to mimic, by triggering a violent Shia-Sunni civil war in any of a number of countries, expecting it to lead to a hardline Sunni dictatorship.

To them, and to Westerners who say that they would like a sectarian Mideast war because it would mean more Muslims killing Muslims, I would tell you: Be careful what you wish for. And I promise you that if you survive, then you will regret having ever wished for such a thing.

At any rate, this will not be the last day with four terrorist attacks. If anything, ISIS and al-Qaeda will try to repeat their “success” in days to come. 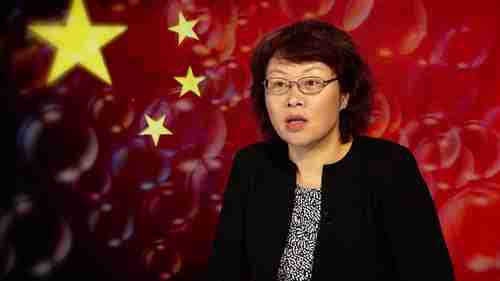 As we reported a week ago on Friday, China’s huge stock market bubble began to burst, and the Shanghai stock market index plunged 13% for one horrible week.

This past week has been just as horrible. On Friday alone, the index fell 7.4%. Hundreds of individual stocks fell 10%, the maximum amount permitted, suggesting that the index might have fallen much farther. The index reached its peak on June 12, and has fallen 19% since then.

In the year preceding June 12, the stock market index surged 250%, creating a huge stock market bubble. Individual Chinese, many of them older citizens, poured their life savings into the stock market in search of high returns. As one analyst said, “This is going to end in tears.” Bloomberg