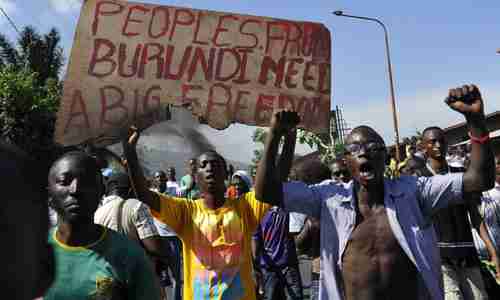 Some 20,000 people from Burundi have sought refuge in neighboring Rwanda or Democratic Republic of Congo (DRC), potentially destabilizing the region. The violence is being triggered President Pierre Nkurunziza’s decision to run for a third term in June. His opponents say that this violates the constitution, while Nkurunziza says that his first term does not count because he was appointed by the parliament, rather than being directly elected.

The police have been shooting bullets, tear gas and water cannons, and about ten people have been killed in four days of violence between youthful protesters and police. The government has blocked messaging services including Facebook, Whatsapp, Twitter and Tango, and some radio stations have been shut down.

Burundi’s last generational crisis war occurred in 1994, when 300,000 people were killed in a civil war between ethnic Hutus and Tutsis.

Most people are familiar with the massive civil war between Hutus and Tutsis that occurred in Rwanda in 1994, killing close to a million people. A war in neighboring Burundi occurred at roughly the same time, though it was overshadowed by the Rwanda war.

Pierre Nkurunziza was a Hutu militia leader in the 1994 war. He was appointed president in 2005 according to the terms of a peace agreement, settling the 1994 civil war, and he ran unopposed and was reelected in 2010.

The 2005 agreement specified a power-sharing arrangement for Burundi’s government, with a 60-40 split between Hutus and Tutsis, respectively. With the Hutus in control of the government for ten years, young Tutsis are now protesting Nkurunziza’s decision to run for another five-year term. Many people fear a return to an all-out civil war, as in 1994, but Burundi is now in a generational Awakening era, so an all-out civil war is impossible, although periods of brief violence can occur at any time. AP and Radio France International and BBC

Physical comparison of a Tutsi, Hutu and Twa (Mount Holyoke)

There are numerous histories of the two tribes on the internet, and most of them seem to agree that the first indigenous tribe in what are now Rwanda and Burundi was the pigmy Twa tribe, who lived by hunting and gathering in forests.

It is not known where the Hutus came from, but they displaced the Twa from the 5th to the 11th century, who then moved farther into the forest.

Let me pause here to discuss the word “displaced.” The internet histories almost make it seem like the Hutu came in, and the Twa said, “Hi Hutu! We’ll just move further into the forest to make room for you!” In a couple of cases, the internet histories claim that all of these tribes lived together peacefully until the white man colonists came in the mid 1800s. This is typical of the worst of the moronic nonsense that you find on the internet.

If the Hutu “displaced” the Twa, it would have been done by a series of bloody, brutal generational crisis wars. And, like all generational crisis wars, they undoubtedly involved massacres, rape, slavery and torture. The Hutu were taller and stronger than the Twa, and they took advantage of their greater weight and strength to smash the Twa and take over their lands. The reason that we do not know about these wars, or about any wars prior to the mid 1800s colonization, is because no records were kept prior to the mid 1800s colonization.

The same story applies to the migration of the Tutsis from southern Ethiopia, starting in the 14th century. Once again, the Tutsis were taller and stronger than the Hutus, and there were undoubtedly a series of bloody, violent generational crisis wars that gave the Tutsis control over the Hutus.

But when the farmers and herders are from two different ethnic groups, then the conflicts over land use become the core triggers that lead from one generational crisis war to the next one. After a particularly bloody war, the survivors vow that nothing like that can ever happen again, so they set up rules to prevent it. In the case of farmers and herders, the farmers agree to set up pathways across their lands for the herders’ animals to travel, and the herders agree to follow those pathways and not trample crops. But as decades pass, and younger generations grow up with no personal memory of the preceding crisis war, all the old agreements unravel, and there’s a new generational crisis war 60-80 years after the end of the last one.

In the case of the Hutus and Tutsis, the Hutus are farmers and the Tutsis are herders. In European terms, the Tutsis became the nobility, and the Hutus became the serfs. The relationship was called “ubuhake,” which means “to work for access to land.” The Tutsi herders controlled the land and the animal pathways. The Hutus were given access to the land and, in return, paid taxes to the Tutsis.

When the German colonists arrived in the late 1800s, they observed that the Tutsis were in charge and that the Hutus worked for the Tutsis, and the Germans implemented institutions to keep it that way. Germany colonized the region as German East Africa, which included today’s Rwanda and Burundi. Some histories say that there was a eugenics angle to this, suggesting that the taller, stronger, lighter-skinned Tutsis were “more European” than the Hutus, and that they were therefore the “superior race,” deserving of power and influence.

World War I was a generational crisis war for the Hutus and Tutsis, and when it ended, Germany lost control of German East Africa, with control given to Belgium in 1919. The Belgians continued to make the distinction between Tutsi and Hutu the basis of their colonial system. Finally, we have some records of what was going on, and we can see a typical generational Awakening era beginning in the 1930s, with the major event being a large Hutu revolt in 1934 in Ndora, a Rwanda farming community populated mainly by Hutu people.

What almost always happens in a country between generational crisis civil wars is that the two groups become peaceful at the climax of the first crisis war, but starting 15-20 years later, the youth from the first post-war generation start rioting and committing intermittent acts of violence. There follows decades of periods of violence alternating with “peace agreements.” Each new period of violence is worse than the previous one.

By the 1960s, the periods of ethnic violence between the Hutus and the Tutsis were becoming chaotic. In July 1962, the two countries Rwanda and Burundi were formed, with Rwanda being a mostly Hutu nation, and Burundi being a mostly Tutsi nation. In December 1963, several hundred Tutsi guerrillas entered southern Rwanda from Burundi. The Rwandans referred to all Tutsis as “cockroaches,” and the Rwandan army eliminated the intruders. Within days, some 14,000 Tutsis were massacred in southern Rwanda, in a coordinated campaign described by Bertrand Russell as ‘the most horrible and systematic massacre’ since the Holocaust.

Violence and peace agreements continued to alternate. In 1993, Rwanda’s president Juvénal Habyarimana signed a peace agreement with Tutsi leaders known as the “Arusha accords,” having been signed in Arusha, Tanzania.

The Arusha accords were never implemented. On April 6, 1994, a plane crash killed both Burundi’s president Cyprien Ntayamira and Rwanda’s president Juvénal Habyarimana. It’s believed that the plane was shot down by a missile, with the Hutus and Tutsis blaming each other for the missile. That plane crash triggered the massive genocidal war between the Hutus and the Tutsis, killing 300,000 people in Burundi and close to a million people in Rwanda.

In 2005, new “Arusha Accords” were signed, this time by the people of Burundi, to settle the 1994 war. Those accords resulting in the creation of the 60-40 government of Hutus and Tutsis, respectively, and the selection of former Hutu militia leader Pierre Nkurunziza as president for two terms. His recent announcement that he will run for a third term has triggered new violence between Hutus and Tutsis.

Today, there are fears of a major new war between the Hutus and the Tutsis, but that’s impossible at this time, because the countries are in a generational Awakening era. There will, of course, be outbreaks of ethnic violence, alternating with peace agreements, but nothing like the massive war that occurred in 1994. Burundi – Conflict Profile and A History of Hutu-Tutsi Conflict and History of Hutu – Tutsi Relations and UPenn – Burundi history History of Rwanda