House Republican Conference Chair Elise Stefanik (R-NY) announced this week her off-year record-breaking fundraising of more than $1.5 million in the third quarter between all of her committees.

Stefanik raised record-breaking numbers with over a year left before election day through Elise for Congress, E-PAC, and Elise Victory Fund, the latter of which used WinRed, a Republican fundraising platform. The congresswoman, who sits in one of the top leadership roles, raised funds to help some targeted Republican incumbents.

“This was a special quarter for our team, and more so than ever, I am truly humbled and blown away by the outpouring of support for my re-election,” said Stefanik.

The Republican conference chair’s campaign claimed that she has raised over $5 million cycle-to-date, another record fundraising haul for the North Country representative. Raising this much money is the largest third-quarter off-year fundraising for any congressional campaign from North Country.

Humbled and blown away that our team raised over $1.5 million in Q3—another off-year record for #TeamElise!

“Each day, our momentum continues to build as more GOP women step up in record numbers to run for Congress, and grassroots patriots grow fired up to take back the House in 2022,” the congresswoman added. “With the backing of tens of thousands of small-dollar donors, we will maintain strong representation for the North Country and finally fire Lame Duck Speaker Nancy Pelosi.”

Record fundraising will help Republicans, who are looking to take back the House of Representatives by unseating as many vulnerable Democrats as possible in next year’s midterm election. The Republicans need to gain a net of at least five seats next year to control the House.

Stefanik will be running for her fifth term in office has consistently gotten above 55 percent of the vote since taking office.

Breitbart News has extensively reported on Nancy Pelosi’s (D-CA) majority crumbling, as the Democrats are having problems finding candidates to run against Republicans for office. 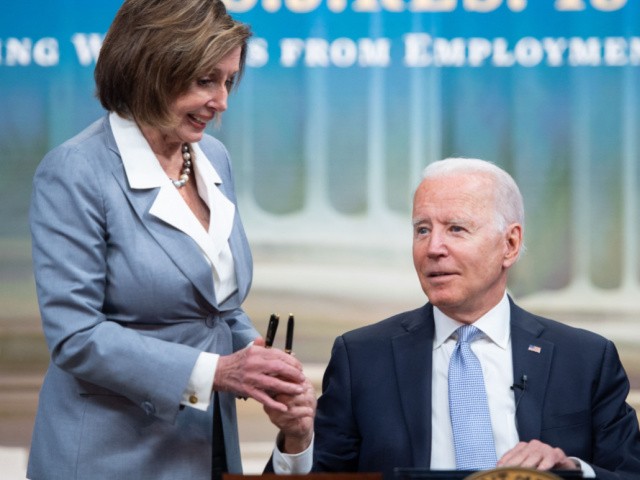 President Joe Biden hands a pen to Speaker of the House Nancy Pelosi after signing a bill during a ceremony in the Eisenhower Executive Office Building in Washington, DC, June 30, 2021. (Saul Loeb/AFP via Getty Images)

Without successfully finding recruits and many members looking to retire or run for higher office, Pelosi’s chances of keeping the slim Democrat majority in Congress are shrinking.