Istanbul (AFP) – An Emirati general accused of torture was elected president of Interpol Thursday, despite the concerns of human rights organisations who fear the agency will be at risk of exploitation by repressive regimes.

Emirati General Ahmed Nasser Al Raisi was elected following three rounds of voting during which he received 68.9 percent of votes cast by member countries, Interpol said in a statement.

Raisi, head of the UAE’s security forces, will take on a largely ceremonial and voluntary role for a four-year term.

It is Interpol Secretary General Juergen Stock who handles day-to-day management of the organisation. Stock was given a second five-year term in 2019. 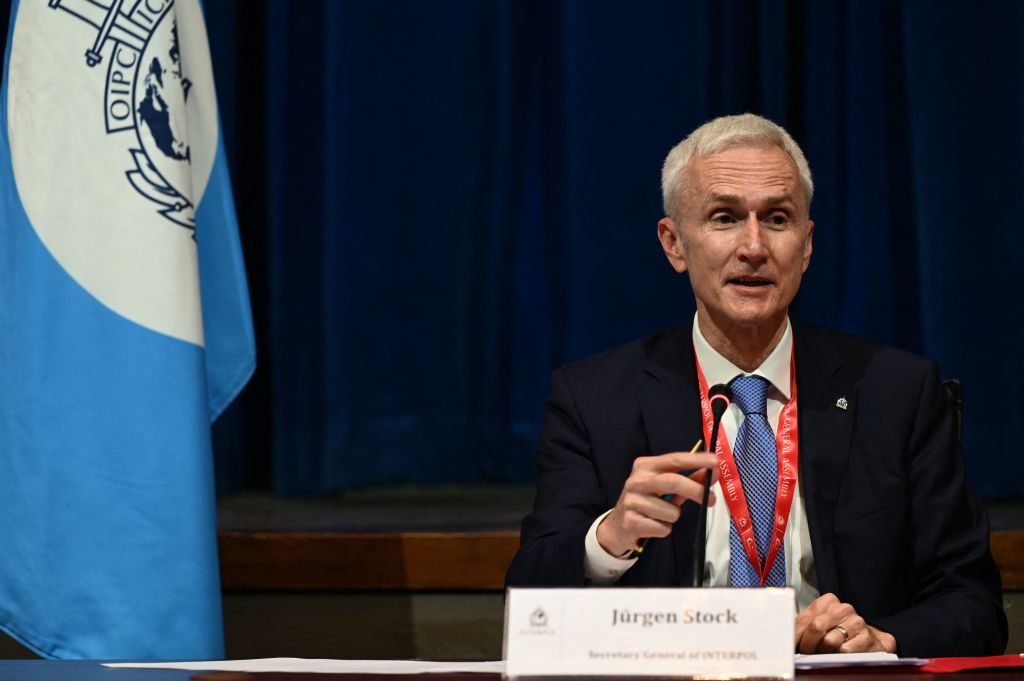 Interpol Secretary-General Jurgen Stock talks during a press conference on the first day of the 89th Interpol General Assembly in Istanbul on November 23, 2021. (OZAN KOSE/AFP via Getty Images)

South Korean Kim Jong-yang was president since the 2018 arrest of his predecessor Meng Hongwei in China, where he had served as a vice minister of public security.

Complaints of “torture” were filed against the Emirati general in recent months in France and Turkey, which is hosting Interpol’s general assembly in Istanbul this week.

Only the Czech Republic’s Sarka Havrankova, a veteran officer overseeing the country’s international cooperation in police matters, stood against the general for the post.

Raisi joined the Emirati police force in 1980 and worked there for several decades.

Three European Parliament members wrote a letter dated November 11 to European Commission President Ursula von der Leyen to warn of the impact the general’s appointment would have on Interpol.

“The election of General Al Raisi would undermine the mission and reputation of Interpol and severely affect the ability of the organisation to carry out its mission effectively,” they wrote.

And in October 2020, 19 NGOs, including Human Rights Watch, expressed concern about the possible choice of Raisi, whom they described as being “part of a security apparatus that continues to systematically target peaceful critics”.

One of the complainants against Raisi, British national Matthew Hedges, said he was detained and tortured between May and November 2018 in the United Arab Emirates after he was arrested on false charges of espionage during a study trip.

INTERPOL: 50 Islamic State Jihadis from Tunisia Have Entered Italy Among Boat Migrants, May Be on Way to Rest of Europe https://t.co/V2yrDSUgun

In another complaint, lawyers for the Gulf Centre for Human Rights accuse the general of “acts of torture and barbarism” committed against government critic Ahmed Mansoor.

Mansoor has been detained since 2017 in a four-square-metre (43-square-foot) cell “without a mattress or protection against the cold” and “without access to a doctor, hygiene, water and sanitary facilities”, the lawyers said.

These complaints have not resulted in any formal proceedings against the general.

Anwar Gargash, a former UAE minister of state for foreign affairs who now advises the country’s president, described the general’s election as “a testament to our country’s achievements and efficiency in the fields of law enforcement and security”.

Gargash dismissed the accusations against Raisi as an “organised and intense smear and defamation campaign” which the election had now “crushed on the rock of truth”.

The UAE donated $54 million (48 million euros) to Interpol in 2017 — almost equivalent to the required contributions of all the organisation’s 195 member countries which amounted to $68 million in 2020.

Interpol Secretary General Stock welcomed the general’s appointment, saying “I look forward to working closely with him in ensuring that Interpol continues to fulfil its mandate and support international police cooperation.”