A Palestinian gunman from the Hamas terror group opened fire by the Western Wall in Jerusalem on Sunday, killing one and injuring another four, two of whom are in serious condition.

The terrorist, 42-year-old Fadi Abu Shkhaidem from east Jerusalem, fired several rounds from a Beretta M12 submachine gun before he was shot dead by security forces.

The attack came 48-hours after British Prime Minister Boris Johnson’s decision to designate all of Hamas, and not just its political wing, a terrorist organization.

Hamas lauded the attack as a “heroic operation.” It said Abu Shkhaidem, a preacher who taught Islam to schoolchildren, was also Hamas leader from the Shuafat refugee camp in east Jerusalem.

The victims were evacuated to hospitals in Jerusalem. A fatally wounded man in his 40s died on arrival at Hadassah Hospital on Mount Scopus.

Three of the victims had just finished praying at the nearby Western Wall, and were still wrapped in prayer shawls and wearing tefillin (phylacteries).

One of them, speaking from his hospital bed, credited the small black box of his forehead tefillin as having saved his life because it prevented the bullet from reaching his head. 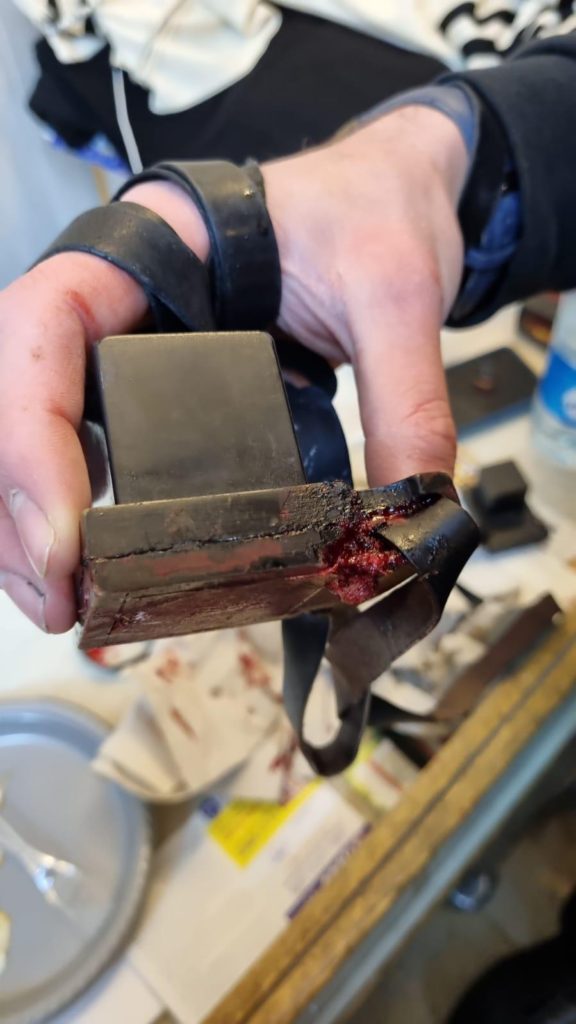 Public Security Minister Omer Barlev, who arrived at the scene shortly after the attack, said it was planned in advance. “His wife went abroad 3 days ago, his children are abroad,” Barlev said.

Prior to carrying out the attack, Abu Shehadam, wrote in a Facebook post in Arabic, “God determines our destiny, but most people do not know. The question of our destiny is a question that God determines, God in His wisdom and greatness, He chooses whoever He wants and presents them to their destiny.”

Israeli Prime Minister Naftali Bennett sent his condolences to the family of the man who was killed and added that he was joining in the “prayers for the recovery of the wounded,” a statement from his office said. He added that security forces would be on high alert in the coming days for “copycat attacks.”

A Hamas terrorist opened fire in the Old City of Jerusalem this morning, murdering a civilian.

Soon after, Hamas distributed sweets to Palestinians in Gaza and praised the "heroic" terrorist.

Hamas is a terrorist organization that promotes violence and must be condemned. pic.twitter.com/E5kZDuLbJQ

Bennett went on to note how the attack further justified British Prime Minister Boris Johnson’s recent decision to designate all of Hamas, and not just its political wing, a terrorist organization, as Breitbart News reported.

“This reflects a welcome understanding, that I hope will spread to all of Europe, about how terrorist organizations work. There are no rockets and no terrorism without a political wrapper, without fundraising, without an incitement machine,” Bennett said. 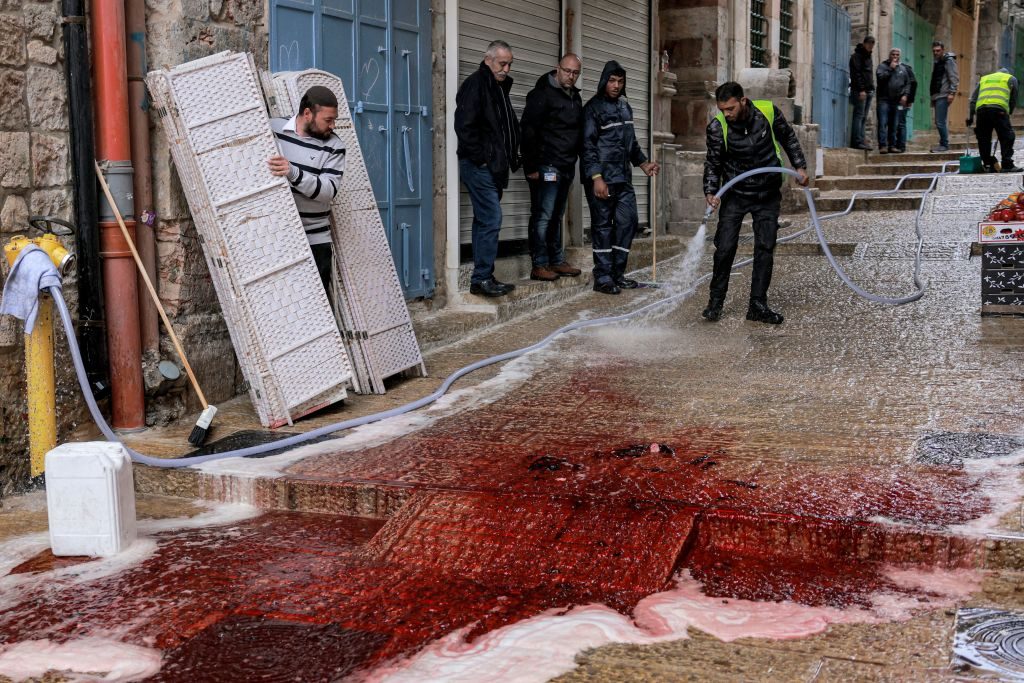 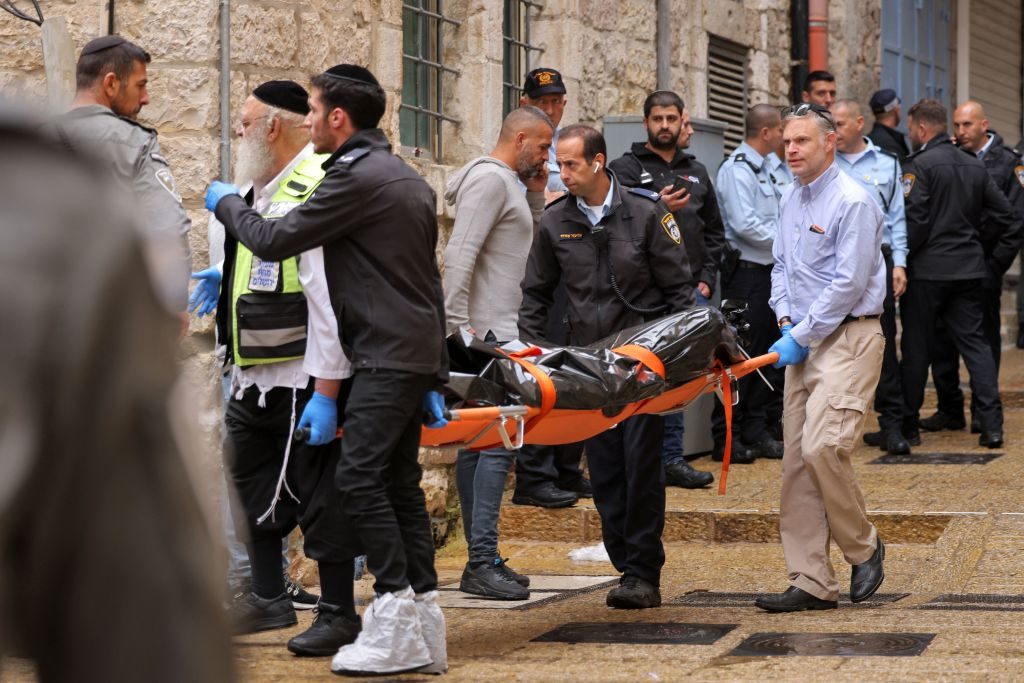 Israeli security forces transport a dead body from the scene of a shooting in the old city of Jerusalem on November 21, 2021. (MENAHEM KAHANA/AFP via Getty Images)

“I would like to personally thank my friend, British Prime Minister Boris Johnson, for this important decision, which will lead to more decisions in the future,” he said.

Bennett had previously called members of Hamas’ political arm as “terrorists in suits.”

Barlev said Sunday’s terrorist was a member of Hamas’ political wing and that the weaponry used was likely smuggled from elsewhere.

Palestinians in the UK and elsewhere slammed the British government over the decision. The Palestinian Embassy to the United Kingdom said the move “undermined Palestinian democracy.”

It also described it as “a retrograde step that will make peace-making harder and diminish the UK’s role.”

UK Home Secretary Priti Patel on Friday permanently banned the Palestinian terror group Hamas in a move that aligns the country’s stance on Gaza’s self-styled rulers in line with the United States and the European Union. https://t.co/jyq1OC4tIB

The Palestinian Foreign Affairs Ministry also denounced the move, saying it was “a continuation of the inexplicable, aggressive policy toward the Palestinian people.”

Hamas said Sunday’s “heroic operation” serves as “a warning to the criminal enemy and its government to stop the attacks on our land and our holy sites. [Israel] will pay a price for the iniquities it commits against Al-Aqsa Mosque, Silwan, Sheikh Jarrah and elsewhere.”