(UPI) — A watercolor painting by Dutch artist Vincent van Gogh that was seized by Nazis has sold at auction for $35.86 million, setting a new record for the medium, Christie’s auction house announced.

Christie’s estimated the painting would sell for between $20 million and $30 million on Thursday, but the artwork exceeded those expectations. It was a new record for a van Gogh painting on paper.

It was part of the auction house’s sale of “The Cox Collection: The Story of Impressionism” along with the “20th Century Evening Sale” in New York City. Together the two sales realized $751.9 million.

“It was a pleasure and much awaited moment to welcome our clients back at Rockefeller Center in our immersive auction experience,” said Adrien Meyer, global head of private sales and co-chairman of Impressionist & Modern Art. 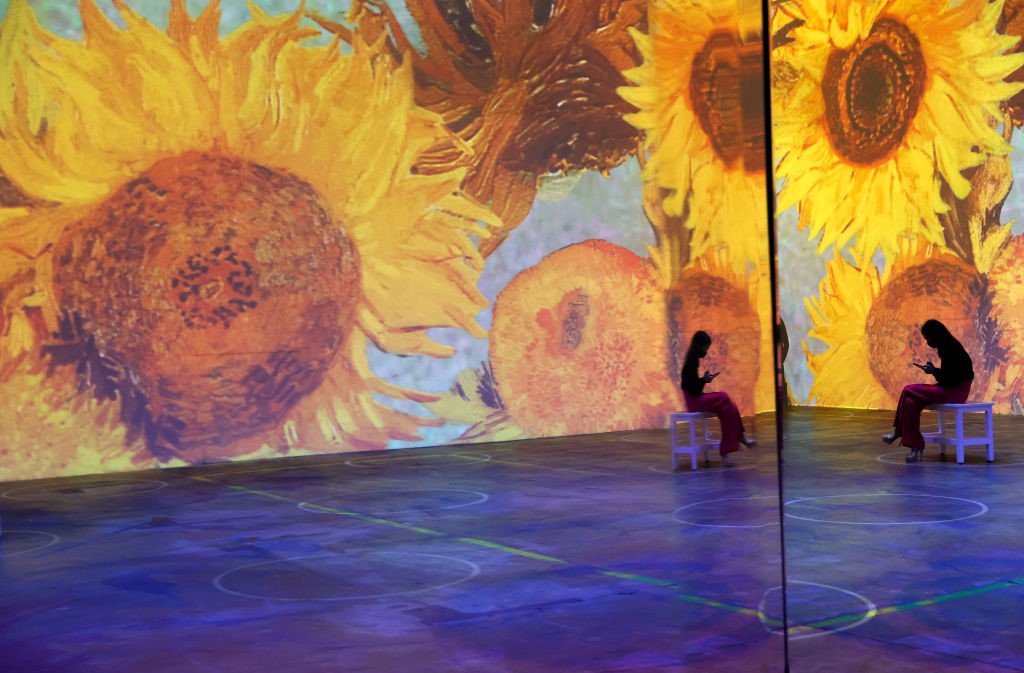 A guest sits on a bench in the Immersive Van Gogh Exhibit during a media preview at SVN West on March 16, 2021 in San Francisco, California. “Immersive van Gogh,” is a digitally projected show that animates paintings by artist Vincent Van Gogh in a surroundscape experience. (Justin Sullivan/Getty)

“The extraordinary Edwin L. Cox collection generated a palpable energy in the room with 21 phones on the first lot setting the tone. There was competitive bidding throughout the sale highlighted by sensational results for the trio of van Gogh’s far exceeding their estimates, with Meules de blé establishing a new record for the artist in medium.”

Meules de blé was one of the first in a series of harvest paintings van Gogh executed during his 1888 summer in Arles. Thursday’s auction was the first time the watercolor was publicly exhibited since it was included in a 1905 retrospective at the Stedelijk Museum in Amsterdam.

“It has become something quite different from in the spring, but I certainly have no less love for nature that is starting to get scorched as early as now,” he said in a letter at the time. “There’s old gold, bronze, copper in everything now, you might say, and that, with the green blue of the sky heated white-hot, produces a delightful color which is exceedingly harmonious.”

The watercolor was eventually owned by Vincent van Gogh’s brother, Theo van Gogh, followed by art collector Gustave Fayet and then by industrialist Max Meirowsky. Under persecution from the Nazis for being Jewish, Meirowsky sold his art collection and fled Germany, at which time Meules de blé became part of the art collection of Miriam Caroline Alexandrine de Rothschild in France.

Her art collection was seized by the Nazis during their occupation of France and she was never able to recover the painting after the end of the war, according to Christie’s.