The Iraqi Embassy in Minsk announced on Thursday it will organize an evacuation flight for Iraqi citizens “wishing to return” home from Belarus amid a migration crisis.

Thousands of migrants in Belarus are camped along the border in what Poland and the European Union described as a deliberate attack orchestrated by Belarus and Russia.

The Moscow Times explained both the central Iraqi government and Iraqi Kurdish officials are offering free evacuation flights, with phone numbers and social media contact information to sign up for the passenger lists – but they are not getting many takers because Iraqi refugees, like thousands of others camped along the Polish border in harsh weather conditions, are still hoping to get into Poland and the European Union.

The Iraqi foreign ministry said on Thursday that roughly 600 Iraqis have requested Polish residency so far. The ministry said Iraq’s embassy in Moscow has begun registering Iraqis who wish to be repatriated.

The Kurdistan Regional Government (KRG) in Iraq estimated 8,000 of the 17,000 migrants currently assembled on the Belarus-Poland border are from the KRG.

“There are some who insist on remaining there until death. There are children and a humanitarian crisis,” Iraqi migration official Karim Nuri said. 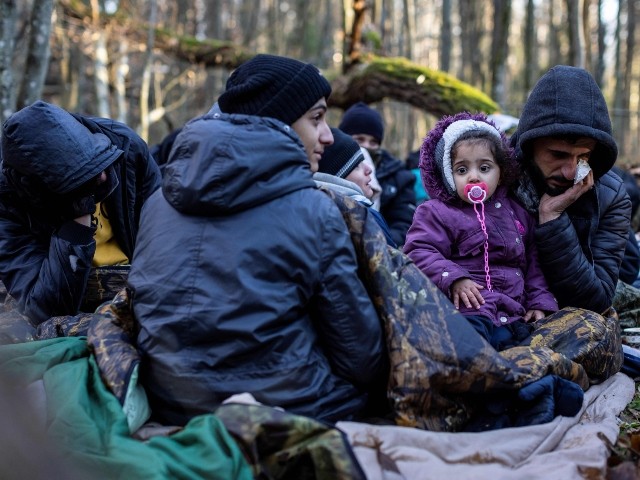 A man holding a child reacts as the members of the Kurdish family from Dohuk in Iraq wait for the border guard patrol, near Narewka, Poland, near the Polish-Belarus border on November 9, 2021. – The three-generation family of 16 members with seven minors, including the youngest who is five months old, spent about 20 days in the forest and was pushed back to Belarus eight times. They claim they were beaten and frightened with dogs by Belarusian soldiers. (Photo by WOJTEK RADWANSKI/AFP via Getty Images)

European officials accuse Belarusian dictator Alexander Lukashenko, and his patrons in Russia, of deliberately assembling hordes of migrants from impoverished countries and then herding them to the Polish border in a “hybrid warfare” strategy intended to destabilize the European Union.

Belarus and Russia calculate the Poles will be unable to keep their border secure for much longer, despite having repelled several efforts by groups of migrants to force their way across, because humanitarian concerns are mounting over freezing temperatures and inadequate supplies for the migrants.

“We are facing a brutal hybrid attack on our EU borders. Belarus is weapon migrants’ distress in a cynical and shocking way,” European Council President Charles Michel said on Wednesday.

Tensions are escalating rapidly in the crisis. When Poland deployed more troops to secure its border, Russia acted as if the Polish military was preparing an invasion and deployed more of its own forces. Russian nuclear-capable bombers flew through Belarusian airspace in shows of military support on Wednesday and Thursday.

“Let them scream and squeak. Yes, those are nuclear-capable bombers, but we have no other choice,” Lukashenko sneered on Thursday. 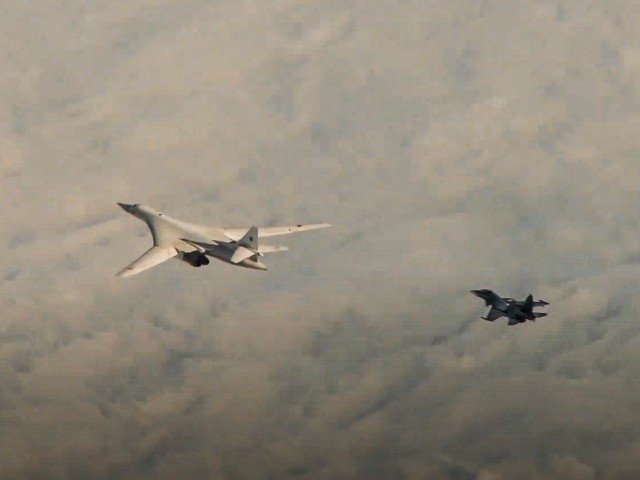 In this photo taken from video released by Russian Defense Ministry Press Service, a long-range Tu-160 bomber of the Russian Aerospace Forces flies patrolling in the airspace of Belarus on Thursday, Nov. 11, 2021. Russia has sent two nuclear-capable strategic bombers on a training mission over Belarus in a show of Moscow’s support for its ally amid a dispute over migration at the Polish border. Russia has supported Belarus amid a tense standoff this week as thousands of migrants gathered on the Belarus-Poland border in hopes of crossing into Europe. (Russian Defense Ministry Press Service via AP)

Lukashenko threatened to shut down the Yamal gas pipeline from Russia to Poland and Germany if the EU does not back down.

“We are heating Europe, they are still threatening us that they will close the border. And if we shut off natural gas there? Therefore, I would recommend that the Polish leadership, Lithuanians and other headless people think before speaking,” he warned.

The Russian government sought to blunt Lukashenko’s threat, promising European customers “the reliability of Russia as a supplier and a partner on current and future contracts is not in doubt.”

The EU is reportedly preparing sanctions against Belarusian officials and entities over the crisis, with European Commission President Ursula von der Leyen specifically mentioning “those airlines who facilitate human trafficking towards Minsk and then the EU-Belarus border” as a target.

In response, airlines including Belarus’ Belavia and Turkish Airlines announced restrictions against passengers from Iraq, Syria, and Yemen flying into Belarus.