Iraqi Prime Minister Mustafa al-Kadhimi survived an assassination attempt on Sunday during which an unidentified party targeted his Baghdad residence with an “explosive-laden drone,” Rudaw reported.

Kadhimi’s home is located in Baghdad’s heavily fortified “Green Zone,” a central district housing international embassies and other buildings and residences associated with diplomats. An “explosive-laden drone” attacked Kadhimi’s residence in the early morning hours of November 7 in a “failed assassination attempt,” according to a statement by the Iraqi military’s Security Media Cell. Prime Minister Khadimi was unharmed in the incident and is “in good health,” the statement confirmed, adding that the cell was taking “necessary measures” to ensure the leader’s continued safety.

Prime Minister Kadhimi issued text and video statements via social media on November 7, in which he confirmed that his home was “the target of a cowardly attack.”

“My residence has been the target of cowardly assault. Praise God, I am fine and so are those who work with me,” Iraq’s Prime Minister Mustafa al-Kadhimi says following a drone attack on his residence. https://t.co/cs8ZO5XNkc pic.twitter.com/GwQjGLaSxI

“Praise God, I am fine and so are those who work with me,” he added.

Al Arabiya cited an unnamed Iraqi security source as saying two of Khadimi’s bodyguards were “injured” in the attack to an undisclosed degree.

Prime Minister Kadhimi called “for calm and restraint on the part of everyone for the good of Iraq” in his Sunday statements.

“Cowardly rocket and cowardly drones do not build countries or futures,” Khadimi added.

No group immediately claimed responsibility for the drone attack on Khadimi’s home on November 7. The incident occurred during a period of “unrest” in Iraq following a contested parliamentary election last month, Rudaw noted on Sunday. 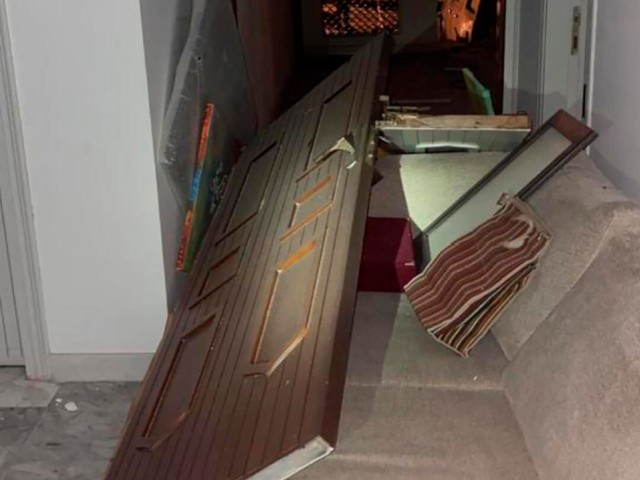 “On Friday [November 5], 125 people were injured and an unconfirmed number were killed when supporters of political parties affiliated with pro-Iran militia groups of the Popular Mobilization Forces (PMF, Hashd al-Shaabi in Arabic) stormed the Green Zone and clashed with security forces,” the media outlet recalled.

“They had been staging a sit-in in central Baghdad for days contesting the election results. Hashd-affiliated parties like the Fatih Alliance lost seats in the vote,” Rudaw, which is a news outlet affiliated with Iraq’s autonomous Kurdistan Region, detailed.

Sunday’s failed assassination “followed threats against Mr. Kadhimi from an Iran-backed militia leader, though the armed groups denied responsibility and no one immediately claimed the attack,” the Wall Street Journal (WSJ) observed.

“Qais Khazali, the leader of one of Iraq’s largest pro-Iran militias, Asaib Ahl al-Haq, accused Mr. Kadhimi of directing the use of live ammunition at the protesters,” according to the newspaper. 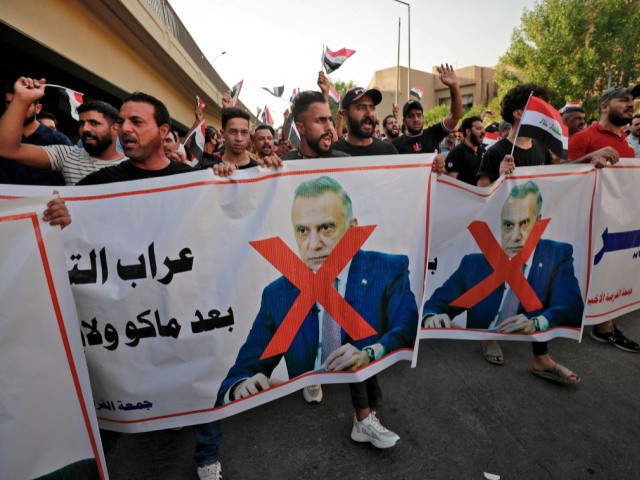 Iraqi demonstrators lift banners against Prime Minister Mustafa Al-Kadhimi during a protest rejecting last month’s election result, near an entrance to the Green Zone in Baghdad on November 5, 2021. (Ahmad Al-Rubaye/AFP via Getty Images)

“Militia groups held a funeral march for the slain demonstrator, a well-known member of the militia. Mr. Khazali said that Mr. Kadhimi needed to face legal consequences for the death of the protester and said the prime minister should ‘pay the price’ for the killing,” WSJ recalled.

Asaib Ahl al-Haq is a U.S.-designated terrorist organization. As part of the PMF, it is a formal arm of the Iraqi armed forces.