ROME — Pope Francis received Palestinian President Mahmoud Abbas in the Vatican Thursday for what was described as a “cordial” meeting between the two leaders.

“With regard to the peace process between Israelis and Palestinians, it was stressed that it is absolutely necessary to reactivate direct dialogue in order to achieve a two-state solution,” reads a Vatican communiqué on the meeting, “also with the help of more vigorous effort on the part of the international community.”

The communiqué also stressed the unique status of Jerusalem as a holy city for the three “Abrahamic religions.”

During the talks, “it was reiterated that Jerusalem must be recognised by all as a place of encounter and not of conflict,” the statement reads, “and that its status must preserve its identity and universal value as a Holy City for all three Abrahamic religions, also through a special internationally guaranteed status.”

The leaders also acknowledged “the good relations between the Holy See and the State of Palestine,” the Vatican asserted, and “bilateral issues of mutual interest were addressed.” 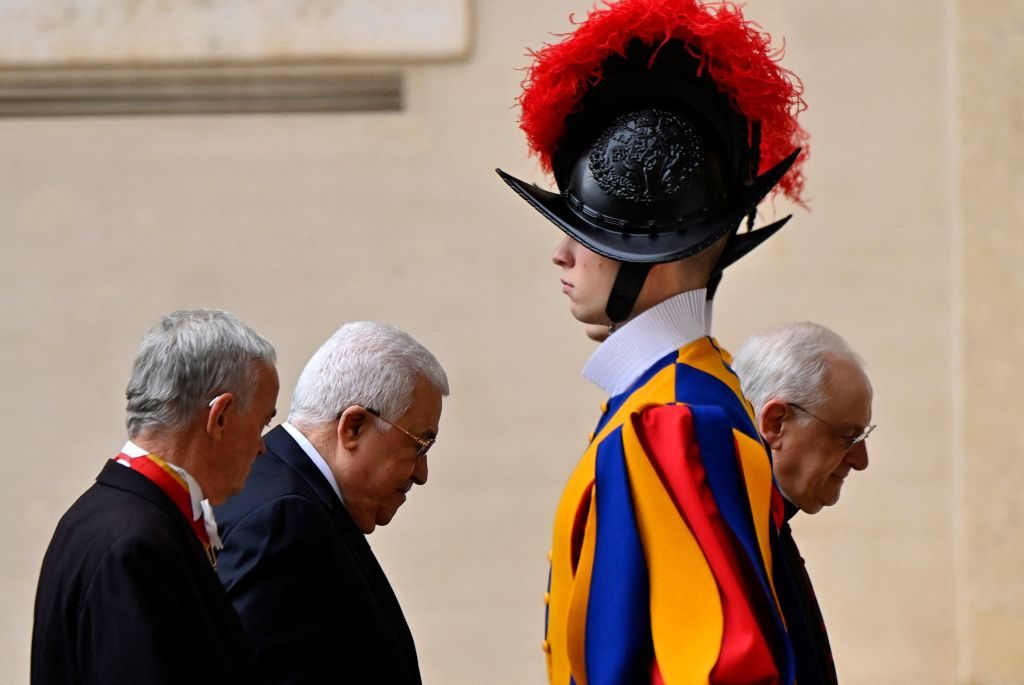 Palestinian President Mahmoud Abbas (2nd L) follows Monsignor Leonardo Sapienza (R), Regent of the Prefecture of the Papal Household, as he arrives at the San Damaso courtyard for a meeting with the Pope at the Apostolic Palace on November 4, 2021 in Vatican. ( ALBERTO PIZZOLI/AFP via Getty)

They also agreed on “the need to promote human brotherhood and peaceful coexistence among the various faiths” as well as “the urgency of working for peace, avoiding the use of weapons, and combating all forms of extremism and fundamentalism.”

In September, Abbas delivered a lengthy address to the U.N. General Assembly, in which he issued an ultimatum to Israel to end its occupation of territories the Palestinians want for a future state within one year.

Abbas threatened to revoke recognition of Israel if it failed to do so.

In what the Associated Press (AP) described as an “unusually harsh speech,” Abbas also accused Israel of “apartheid” and “ethnic cleansing.”

“If the Israeli occupation authorities continue to entrench the reality of one apartheid state as is happening today, our Palestinian people and the entire world will not tolerate such a situation,” he said. “Circumstances on the ground will inevitably impose equal and full political rights for all on the land of historical Palestine, within one state.”