UNITED NATIONS (AP) — Iran executed over 250 people, including at least four child offenders, in 2020 and so far this year has carried out 230 executions that included nine women and one child who was executed in secret, the U.N. independent investigator on human rights in Iran said Monday.

Javaid Rehman told the U.N. General Assembly’s human rights committee that Iran continues to implement the death penalty “at an alarming rate” and said “the absence of official statistics and lack of transparency around executions means that this practice escapes scrutiny resulting in serious abuses preventing accountability.”

According to Amnesty International, Iran was the top executioner in the Middle East last year, accounting for more than half the region’s 493 executions, followed by Egypt, Iraq and Saudi Arabia. Amnesty’s annual figures exclude China, where executions believed to number in the thousands are classified as a state secret, and omit executions from some countries marred by conflict like Syria.

Rehman said his latest report highlights serious concerns over the grounds Iran uses for imposing the death penalty, such as “vague national security charges.” Iran also has “deeply flawed judicial processes, where even the most basic safeguards are absent,” he said. 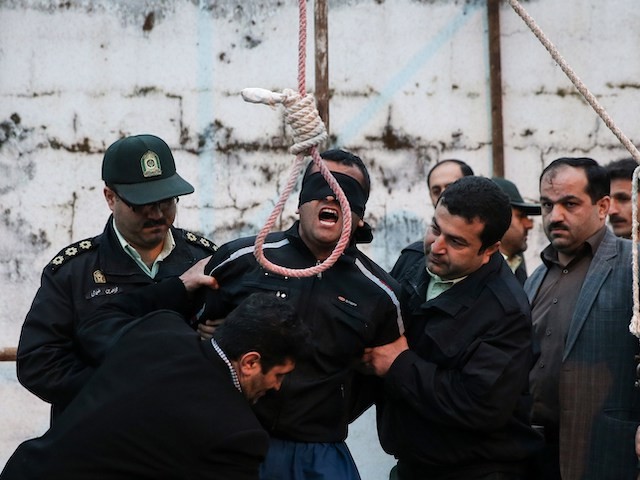 Balal, who killed Iranian youth Abdolah Hosseinzadeh in a street fight with a knife in 2007, is brought to the gallows during his execution ceremony in the northern city of Noor on April 15, 2014. (ARASH KHAMOOSHI/AFP via Getty Images)

“These elements, and the heavy reliance by courts on forced confessions extracted under torture and other fair trial violations lead me to conclude that the imposition of the death penalty in the Islamic Republic of Iran constitutes arbitrary deprivation of life,” Rehman said.

Rehman, a Pakistani-born professor of human rights and Islamic law at Brunel University in London, called it “imperative” for Iran to undertake criminal law and justice reforms, starting “most urgently” with a moratorium on the death penalty for child offenders.

He said that beyond executions, the overall human rights situation in Iran “remains grim.”

He pointed to “persistent impunity for serious violations of human rights law,” including those committed by people in powerful positions and “at the highest level of public office.”

“The presidential elections in June this year clearly highlight this point,” Rehman said. He didn’t elaborate but Iran’s new hard-line president, Ebrahim Raisi, led Iran’s judiciary in recent years and as a prosecutor early in his career Raisi served on a so-called “death panel” deciding who would live or be executed in a purge that activists say resulted in the killing of as 5,000 people in 1988.

Rehman said other factors contributing to impunity include “the alarming level of intimidation or persecution of those who call for accountability,” citing the high number of acts of reprisals against families of victims, human rights defenders, lawyers and journalists who seek justice. There also has been “a heightened targeting of minority groups and advocates of minority rights,” he said. 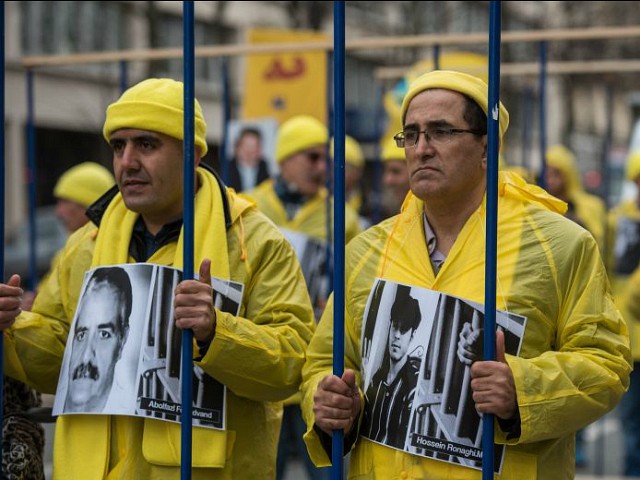 Demonstrators pose behind fake prison bars as Iranian opposition protesters march during a rally in Paris, France, to protest against executions in Iran.  (AP Photo/Zacharie Scheurer)

“The use of lethal force against peaceful protesters continues to be characteristic of the authorities’ approach to the exercise of the right to peaceful assembly,” he told the committee.

Rehman pointed to the lethal use of live ammunition against unarmed people demonstrating against the lack of water in the western province of Khuzestan in July, when at least nine people including a minor were killed and a large number of other protesters were injured.

He said the widespread use of torture against detainees in many cases amounts to “arbitrary deprivation of life.”

Rehman singled out two cases: Amirhossein Hatami, a Kurdish prisoner who died after reportedly being beaten with batons to his head by prison officials, and the unclear circumstances of the death in September of Shahin Naseri, a prisoner who provided witness testimony about the torture endured by Navid Afkari, who was executed last year after participating in protests.