The eponymous founders of Ben & Jerry’s were left flummoxed when accused of hypocrisy over the company’s recent decision to stop selling its products in Israel, in what has been dubbed a “car-crash” interview with Axios on HBO.

Ben Cohen and ice cream co-founder Jerry Greenfield were asked by the interviewer, Alexi McCammond, why the decision to boycott a state over its policies never stretched to Georgia and Texas, despite their vocal opposition to those states’ abortion and voting rights laws.

“Why do you still sell ice cream in Georgia? Texas?” McCammond asked.

“You ask a really good question and I think I’d have to sit down and think about it for a bit.”

Car-crash interview by ⁦@benandjerrys⁩ founders showing why their Israel boycott is wrong-headed, unfair and yes – discriminatory. No wonder States and customers are dropping them. @unilever ought to act to reverse this – and quickly. pic.twitter.com/fCpJJfqtXa

In July, Ben & Jerry‘s announced it would no longer sell ice cream in what it called the “Occupied Palestinian Territory,” presumably referring to Jewish settlements in the West Bank and east Jerusalem.

A month later, Arizona became the first state to divest all public funds — amounting to more than $140 million – from Ben & Jerry’s and its parent company Unilever over what it deemed was an “anti-Semitic” move. New Jersey has followed suit, divesting $180 million in Unilever stock. 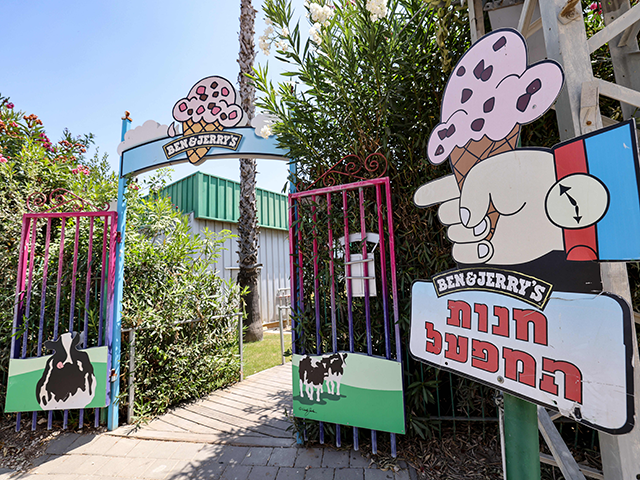 A view of the entrance of the ice-cream shop inside the Ben & Jerry’s factory in Be’er Tuvia in southern Israel, on July 21, 2021. Ben & Jerry’s announced that it will stop selling ice cream in the West Bank and East Jerusalem. (EMMANUEL DUNAND/AFP via Getty Images)