The Israeli Border Police officer who was shot at point-blank range by a Palestinian terrorist gunman last week during riots on the border with Gaza succumbed to his wounds and died on Monday.

Barel Hadaria Shmueli, 21, fought for his life at Soroka Medical Center in Beersheba, where nightly vigils took place in the hope he might recover. He was laid to rest in Israel Police’s burial plot in Tel Aviv’s Kiryat Shaul military cemetery.

“Today we parted with the child who sacrificed his life to protect us and be the best man he can be,” Shmueli’s parents said in a statement. “Barel, we may be saying goodbye but we will never forget you. It was a privilege to know you and a shame we didn’t have more time.” 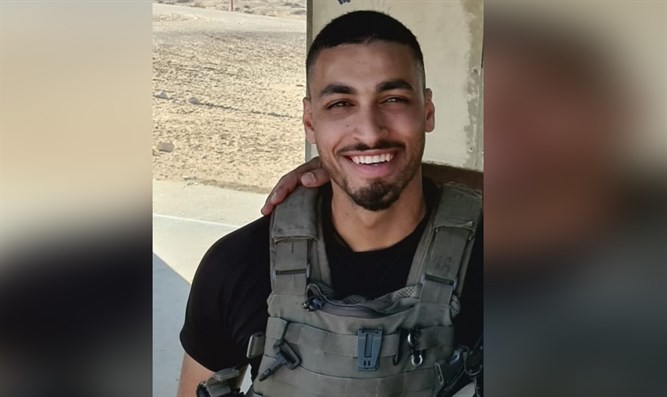 Barel Hadaria Shmueli, from central Israel, was shot by a Palestinian rioter who aimed his gun in a hole on the border wall. (Israel Police)

Soroka hospital said in a statement: “The medical team fought for his life and he underwent multiple surgeries during his hospitalization. Despite the intense efforts, due to his complex injury we was forced to determine his death. We share in the heavy grief of his family.”
Israeli Prime Minister Naftali Bennett tweeted his condolences to the family.

“There are no words that can comfort the family in its deep mourning,” he said. “Barel was a fighter in his life and in his death. He fought for his life until the last moment, as all of Israel prayed for him. I would like to embrace the family, which has lost what was most precious to it. May Barel’s soul be bound in the chain of life.”

A video shared widely on social media last week showed Shmueli, from central Israel, being shot by a Palestinian rioter who aimed his gun in a hole on the border wall. Other rioters tried unsuccessfully to snatch Shmueli’s gun away.

Shmueli was a sniper in the elite undercover mista’arvim unit, a unit in which soldiers go undercover posing as Palestinians, and had taken part in “dozens of operations to foil terror attacks and crime in the southern region,” the military said in a statement.

“I am saddened and deeply pained by the passing of the Border Police officer St.-Sgt. Barel Shmueli, of blessed memory, who fell in the line of duty,” he said. “My wife, Michal, and I embrace his family and share in their heavy grief over the passing of such a beloved, dear son. May his memory be a blessing.”

A video shows Palestinians along the Gaza border fence this evening firing a gun into an IDF firing position. pic.twitter.com/WTln2UznEk

“Our hearts are broken,” opposition leader Benjamin Netanyahu tweeted. “We prayed for a miracle. Unfortunately, the worst has happened.

“Barel fought with his friends with determination and heroism in the face of terrorism from Gaza. We will never forget his bravery,” Netanyahu wrote.

Shmueli’s mother lashed out at the Israeli military establishment as well as the prime minister last week for barring IDF soldiers from defending themselves by shooting back.

“A 12-year-old terrorist sniped at him point blank, and all this knowing that our fighters knew that it was forbidden to shoot and respond. Why was my son sent? Why? I want an answer,” she told 103FM.

Shmueli’s father spoke at the funeral. “I promised you at your deathbed, when you took your last breath, that I would be strong for you. I love you,” he said. He added a thank to the Israeli people for their prayers.

At his funeral, she said: “The state and the IDF sent you to be an axe against the terrorists in Gaza,” she said.

“The next day, they closed the hole, but I cannot go on with my life. We have no more life.”

Israel struck several terror targets, including four Hamas weapons facilities, in the Gaza Strip in response to the attack on Shmueli.