The leader of the Lebanon-based Hezbollah terror group said Israel should learn a lesson from the Biden administration’s pullout of Afghanistan that the U.S. could not be relied on as an ally.

“Those watching most closely and drawing conclusions from this are the Israelis,” Hassan Nasrallah said in a televised speech carried by official Hezbollah media.

“In order not to have Americans fighting for other [nations], [President Joe] Biden was able to accept a historic failure. When it comes to Lebanon and those around it, what will be the case there?” Nasrallah asked.

“Everybody must consider it and meditate upon it,” Nasrallah said, he said in reference to the Taliban’s lightening-fast takeover. “Those who most need to draw conclusions and wisdom from this are the peoples of this region.”

Nasrallah also slammed the U.S. for not helping the many Afghans who had collaborated with it flee the country.

“They evacuated the dogs who worked in the security forces, but not those who aided them. They took out their equipment, but left the human beings behind… these are the Americans,” Nasrallah said. 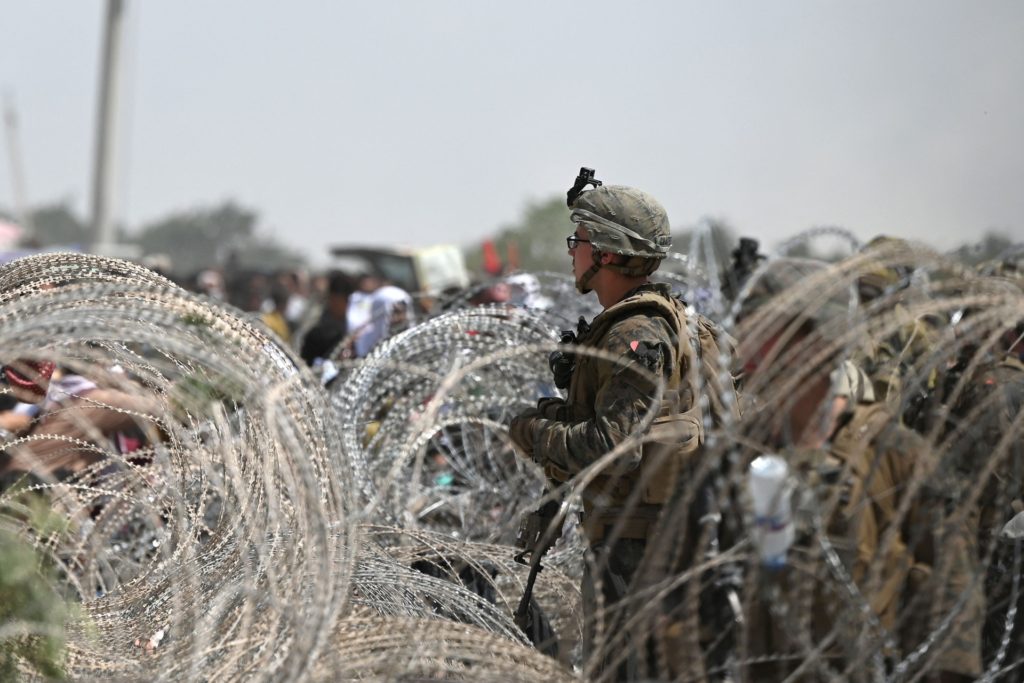 A U.S. soldier stands on guard as Afghans gather on a roadside near the military part of the airport in Kabul on August 20, 2021, hoping to flee from the country after the Taliban’s military takeover of Afghanistan. (WAKIL KOHSAR/AFP via Getty Images)

Iran’s Supreme National Security Council secretary Ali Shamkhani echoed a similar message in a tweet Wednesday, claiming “the fate of the U.S. in Vietnam and Afghanistan will be the unchangeable fate of the occupying Zionist regime too.”

“The end of any occupation is a humiliating expulsion,” he said according to the Times of Israel.

Israeli opposition leader Benjamin Netanyahu wrote on Facebook earlier Wednesday former secretary of state John Kerry had used Afghanistan in 2013 as a casebook study in order to prove him how the U.S. built an army of locals that could fight terror.

“The message was clear — the ‘Afghani model’ was the model that the U.S. wanted to implement with the Palestinians,” he wrote, adding that Kerry had offered to accompany the then-Israeli premier to Afghanistan to see it for himself.

“We would get the same results [as Afghanistan] if we gave parts of our homeland to the Palestinians,” he claimed.

A senior Hamas official earlier this week also compared the Taliban’s fight against the American-backed Afghani government and Hamas’s fight against Israel, the Times of Israel reported.

“The Taliban are victorious today after being accused of backwardness and terrorism. They emerge today as a smarter and more realistic movement. They confronted America and its agents and refused to compromise with them. They were not deceived by bright headlines about ‘democracy’ and ‘elections,’” Moussa Abu Marzouk tweeted.

The Gaza-based Islamic Jihad terror group congratulated the Taliban on their victory, saying it was “the liberation of [Afghani] land from the Western and American occupation.”