Al-Qaeda in Yemen congratulated the Taliban terror group on Wednesday for its successful takeover of Afghanistan this week, vowing to continue its own jihad on the Arabian Peninsula.

“This victory and empowerment reveals to us that jihad and fighting represent the (Islamic law)-based, legal, and realistic way to restore rights (and) expel the invaders and occupiers,” Al-Qaeda in the Arabian Peninsula (AQAP) said in a statement issued August 18, according to the SITE Intelligence group, a global terrorism monitor. 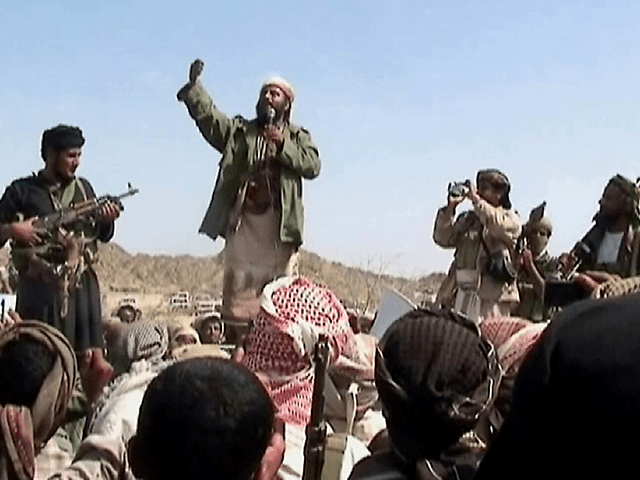 A man claiming to be an Al-Qaeda member addresses a crowd gathered in Yemen’s southern province of Abyan. (-/AFP via Getty Images)

“On Sunday [August 15] AQAP fighters in Yemen’s central governorate of Bayda and southern province of Shabwa celebrated the Taliban’s return to power in Afghanistan with fireworks and by firing gunshots in the air,” local residents told Agence France-Presse this week.

Both AQAP and the Taliban are terrorist organizations based on Sunni Islam. The two groups have maintained close ties over the past two decades. The Taliban seized Kabul on August 15, quickly ousting the Afghan national capital’s U.S.-backed, democratic government from power. AQAP referred to the Taliban’s toppling of democracy in Kabul in its Wednesday press release.

“As for the game of democracy and working with simple pacifism, it is a deceptive mirage, a fleeting shadow, and a vicious circle that starts with a zero and ends with it,” the group, which is active primarily in Yemen, said.

Al-Qaeda’s statement condemning democratic systems of government came two days after the Taliban confirmed it would rule Afghanistan through an administration based on Islamic law, or sharia.

New 2-page statement from #AlQaeda in #Yemen congratulates #Taliban on victory in #Afghanistan. #AQAP concludes that this:
– Heralds wider triumphs & a new era of Islamic rule
– Proves #jihad is the way to achieve goals
– Reveals the “democracy game” & peaceful means as a mirage pic.twitter.com/4zyOEu6Btv

“There will be no democratic system at all because it does not have any base in our country,” Waheedullah Hashimi, a senior Taliban commander, told Reuters on August 17.  “We will not discuss what type of political system should we apply in Afghanistan because it is clear [sic]. It is sharia law and that is it.”

Hashimi told Reuters he would join a meeting of Taliban leaders later this week in which the commanders plan to discuss “issues of governance.”

The U.S. government accused the Taliban of sheltering al-Qaeda leader Osama Bin Laden in Afghanistan during the Taliban’s previous rule over the country from 1996-2001. Washington cited Al-Qaeda’s alleged presence within Afghanistan to justify the U.S. invasion of the country in the fall of 2001, following Al-Qaeda’s jihadist attacks on America on September 11 of that same year. 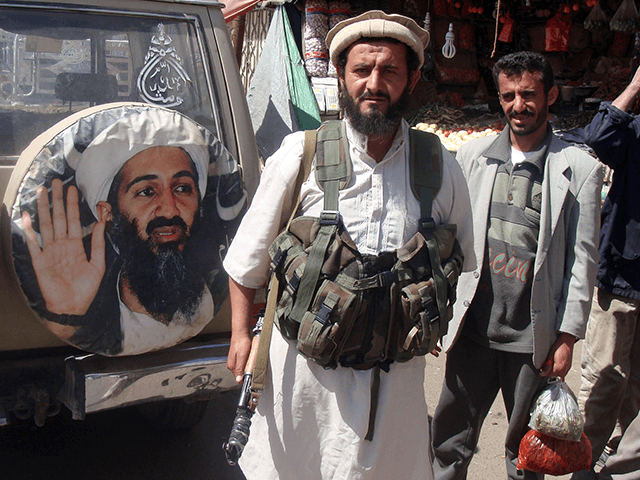 A fighter is seen standing in front of an image of Osama bin Laden, the late head of al-Qaeda, in the town of Rada, 130 kilometres (85 miles) southeast of the capital Sanaa. ( -/AFP via Getty Images)

Washington considers AQAP to be the most dangerous branch of Al-Qaeda’s global terror network. The U.S. military has carried out drone strikes against AQAP fighters in Yemen since 2001. The administration of former U.S. President Donald Trump confirmed that it “conducted a counterterrorism operation in Yemen that successfully eliminated Qasim al-Rimi, a founder and the leader of al-Qa’ida in the Arabian Peninsula (AQAP),” in January 2020. Al-Rimi is believed to have been killed via drone strike, though the Trump administration did not disclose specific details of his death.

Trump’s administration worked towards establishing peace between the Taliban and Afghanistan’s U.S.-backed government in Kabul throughout 2020, continuing the efforts through the end of Trump’s presidency in January 2021. Washington established the peace process by agreeing to withdraw U.S. troops from Afghanistan and end America’s nearly 20-year-long military occupation of the country, but only if the Taliban also agreed to cut ties with al-Qaeda. AQAP’s statement on Wednesday expressing support for the Taliban’s ouster of Afghanistan’s U.S.-backed government suggests al-Qaeda remains closely linked to the Afghan-based terror group.