U.N. Secretary-General Antonio Guterres submitted a report to the Security Council (UNSC) on Tuesday that warned the Islamic State (ISIS) has regained an “alarming” amount of its strength by taking advantage of “the disruption, grievances, and development setbacks” caused by the Wuhan coronavirus pandemic.

“As pandemic-related restrictions gradually ease, there is an elevated near-term threat of Daesh-inspired attacks outside conflict zones by lone actors or small groups that have been radicalized, incited and possibly directly remotely online,” Guterres said, using another name for ISIS.

The Secretary-General’s report said ISIS is still active across much of Syria and Iraq, where it has rebuilt enough of its combat strength to wage “hit-and-run” attacks against government forces, hoping to “undermine critical infrastructure projects, inflame sectarian divisions and communal grievances and generate media coverage.”

The U.S. Defense Department Inspector-General released a report on Tuesday that said one of the Islamic State’s tactics for regenerating its manpower in Iraq and Syria involves smuggling young boys and teenagers from refugee camps in Syria and training them as fighters.

The camp at al-Hol, packed with about 60,000 displaced women and children, was cited as a particularly dangerous hotbed of ISIS recruitment – much of it conducted by female Islamic State supporters paid to target children with radical propaganda.

ISIS has proven itself capable of moving weapons and funds into the camps, and extracting recruits from them, with sophisticated smuggling networks. The Secretary-General’s report estimated ISIS has up to $50 million in funds available in Syria and Iraq. 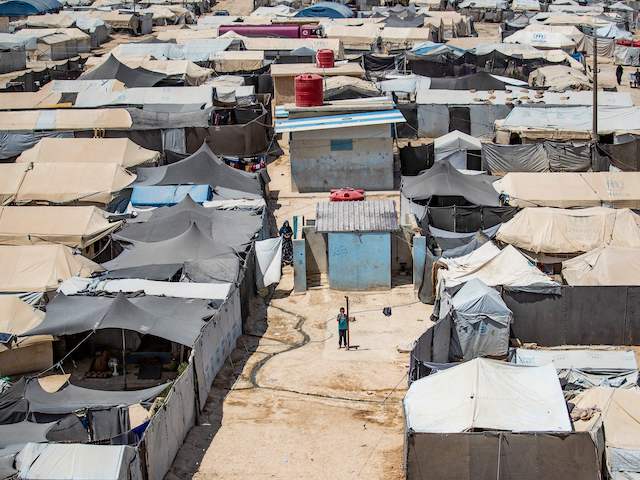 A child is pictured among shelters at the Kurdish-run al-Hol camp, which holds relatives of suspected Islamic State (IS) group fighters, in Syria’s northeastern Hasakeh governorate on August 2, 2021.(Photo by DELIL SOULEIMAN/AFP via Getty Images)

Guterres told UNSC that ISIS is also growing dangerously strong in Afghanistan, Africa, and South Asia, with some of its “most effective” affiliates working in Mali, Burkina Faso, Niger, Nigeria, Chad, Cameroon, Mozambique, and Tanzania.

The report warned that ISIS is active around Kabul, even as the Taliban sweeps across the country in the wake of U.S. and NATO withdrawal, apparently hopeful that it can siphon manpower from the Taliban if the insurgency makes a deal with the Afghan government and some of its most “intransigent” jihadis become disgruntled. One U.N. member state estimated ISIS strength in Afghanistan could increase tenfold, to 10,000 or more fighters, under that scenario.

In Africa, ISIS is increasingly making use of advanced tactics, such as armed drones, and has been able to defeat military forces in theaters like Nigeria. In places like Mozambique, ISIS affiliates are using mass-casualty attacks to destroy the local economy and create a deeper pool of angry and desperate residents it can recruit from.

Al-Qaeda is also gaining strength in Africa using similar tactics, making it “the region most affected by terrorism” according to the Secretary-General’s report.

The report suggested that local governments and military forces across Africa have proven comprehensively incapable of applying the “pressure” needed to keep ISIS and al-Qaeda from flourishing, so the security situation in countries such as Somalia, Mali, and Mozambique deteriorated sharply after American and European forces withdrew.

The report said the pandemic helped ISIS grow more powerful and the end of emergency pandemic restrictions could unleash waves of deadly attacks, including terrorist strikes in the Western world, that were bottled up until now.

Guterres said the increased use of computer technology required by the pandemic, to facilitate lockdown measures such as working from home and remote learning, increased the Islamic State’s ability to spread its influence online and inspired the terrorist group to become more tech-savvy.

The report warned that “new and emerging technologies” from the pandemic could be “used for terrorist purposes.” It said ISIS has learned to function in a more distributed manner, with more autonomous regional affiliates and less communication that could be traced to its high command.

For example, the Institute for Security Studies (ISS) published an analysis on Tuesday that said ISIS in Africa has organized itself into four “caliphates” poised for rapid growth, each with its own semi-autonomous leadership. The remodeled Islamic State West Africa Province (ISWAP) is better able to absorb losses from battles against the regional military and more aggressive about spreading its influence across national borders. Islamic State high command still has control over the decentralized caliphates, however, as evidenced by the liquidation of former Boko Haram leader Abubakar Shekau in May after he formed a splinter group, drove away promising recruits, and generally made himself an obstacle to the “expansionist” ISWAP agenda.

“As pandemic-related restrictions gradually ease, there is an elevated near-term threat of Daesh-inspired attacks outside conflict zones by lone actors or small groups that have been radicalized, incited and possibly directly remotely online,” the report said.

“Daesh could regain the ability to orchestrate international attacks if either its core or one of its regional affiliates became strong enough,” Guterres concluded. “This scenario has only become more plausible.”