(AP) — Iranians voted Friday in a presidential election that a hard-line protege of Supreme Leader Ayatollah Ali Khamenei seemed likely to win, leading to low turnout fueled by apathy and calls for a boycott.

Opinion polling by state-linked organizations and analysts indicated that judiciary chief Ebrahim Raisi — who is already under U.S. sanctions — was the dominant front-runner in a field of just four candidates. Former Central Bank chief, Abdolnasser Hemmati, is running as the race’s moderate candidate but hasn’t inspired the same support as outgoing President Hassan Rouhani, who is term limited from seeking the office again.

By mid-day, turnout appeared far lower than Iran’s last presidential election in 2017. State television offered tight shots of polling places, several of which seemed to have only a handful of voters in the election’s early hours.

Those passing by several polling places in Tehran said they similarly saw few voters. In some images on state TV, poll workers wore gloves and masks due to the coronavirus pandemic, with some wiping down ballot boxes with disinfectants.

If elected, Raisi would be the first serving Iranian president sanctioned by the U.S. government even before entering office over his involvement in the mass execution of political prisoners in 1988, as well as his time as the head of Iran’s internationally criticized judiciary — one of the world’s top executioners. 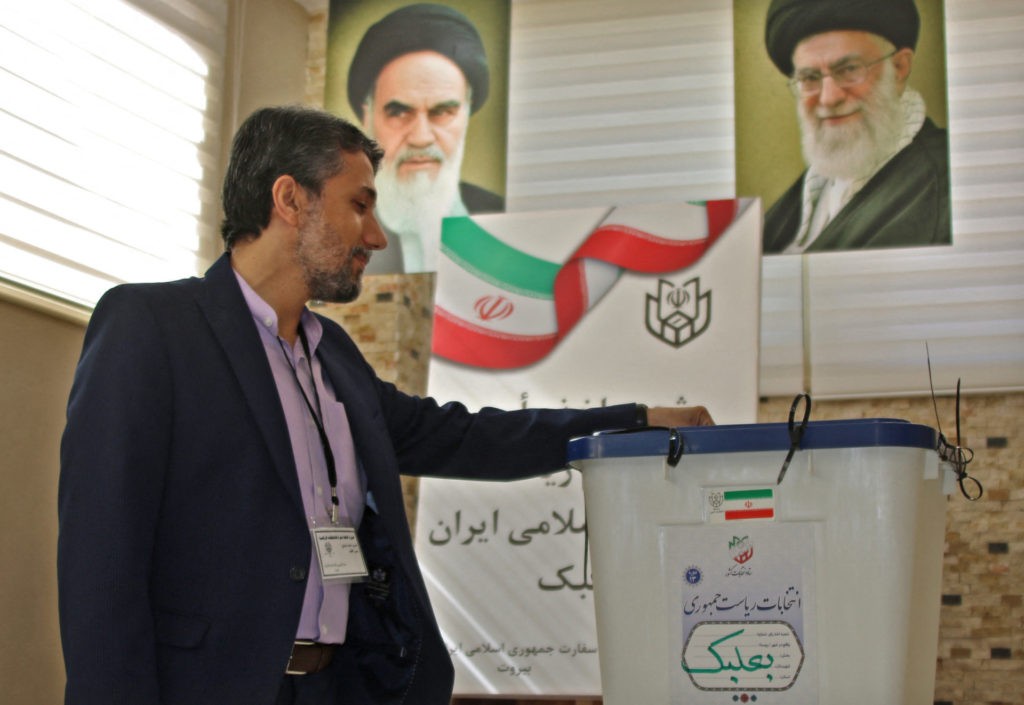 An Iranian national casts his vote for the presidential election in the Islamic republic, at a polling station in the Hezbollah stronghold of Baalbeck, in Lebanon’s eastern Bekaa valley. Iranian voters cast their ballots today in a presidential election in which ultraconservative cleric Ebrahim Raisi is seen all but certain to coast to victory after all serious rivals were barred from running. (AFP via Getty Images)

It also would put hard-liners firmly in control across the Iranian government as negotiations in Vienna continue to try to save a tattered deal meant to limit Iran’s nuclear program at a time when it is enriching uranium to the closest point yet to weapons-grade levels. Tensions remain high with both the U.S. and Israel, which is believed to have carried out a series of attacks targeting Iranian nuclear sites as well as assassinating the scientist who created its military atomic program decades earlier.

Whoever wins will likely serve two four-year terms and thus may be at the helm at what could be one of the most-crucial moments for the country in decades — the death of the 82-year-old Khamenei. Already, speculation has mounted that Raisi may be a contender for the position, along with Khamenei’s son, Mojtaba.

Polls opened at 7 a.m. local time for the vote, which has seen widespread public apathy after a panel overseen by Khamenei barred hundreds of candidates, including reformists and those aligned with Rouhani. Khamenei cast the first vote from Tehran, where he urged the public to take part.

“Through the participation of the people the country and the Islamic ruling system will win great points in the international arena, but the ones who benefit first are the people themselves,” Khamenei said. “Go ahead, choose and vote.” 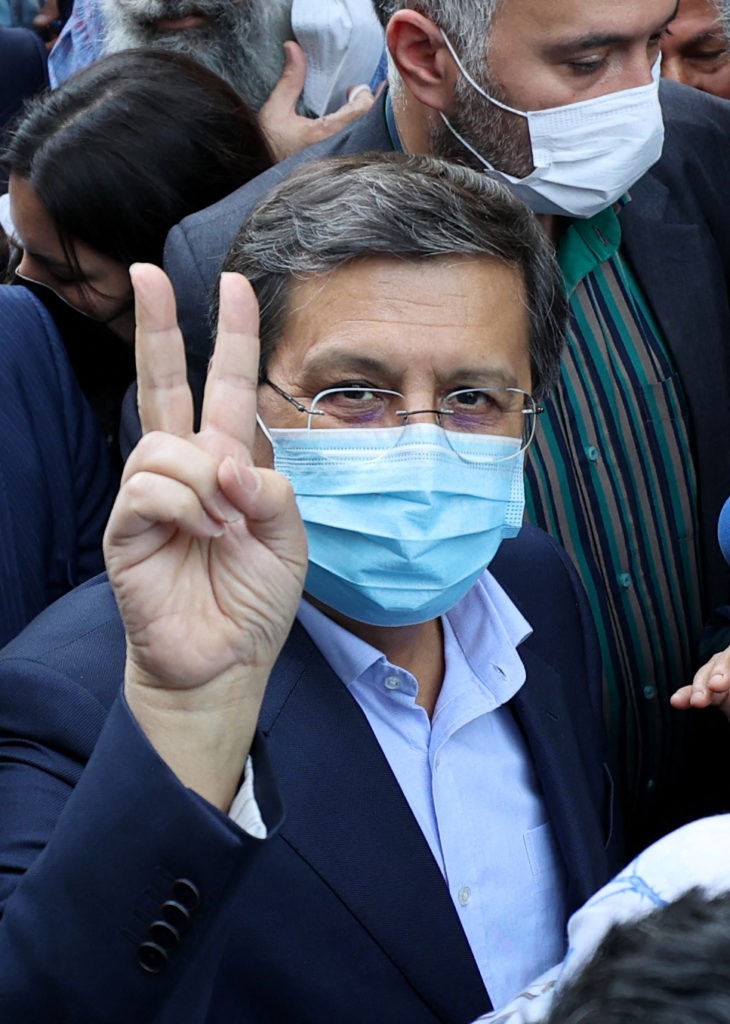 Abdolnasser Hemmati, a relatively low-profile reformist candidate in Iran’s presidential election, flashes the V-sign for victory after casting his vote at a polling station in the capital Tehran, on June 18, 2021. ( ATTA KENARE/AFP via Getty Images)

Raisi, wearing a black turban that identifies him in Shiite tradition as a direct descendant of Islam’s Prophet Muhammad, voted from a mosque in southern Tehran, waving to those gathered to cast ballots. The cleric acknowledged in comments afterward that some may be “so upset that they don’t want to vote.”

“I beg everyone, the lovely youths, and all Iranian men and women speaking in any accent or language from any region and with any political views, to go and vote and cast their ballots,” Raisi said.

But few appeared to heed the call. There are more than 59 million eligible voters in Iran, a nation home to over 80 million people. However, the state-linked Iranian Student Polling Agency has estimated a turnout will be just 44%, which would be the lowest ever since the country’s 1979 Islamic Revolution.

Fears about a low turnout have some warning Iran may be turning away from being an Islamic Republic — a government with elected civilian leadership overseen by a supreme leader from its Shiite clergy — to a country more tightly governed by its supreme leader, who already has final say on all matters of state and oversees its defense and atomic program.

“This is not acceptable,” said former President Mohammad Khatami, a reformist who sought to change the theocracy from the inside during his eight years in office. “How would this conform to being a republic or Islamic?”

As Hemmati voted in Tehran, he was mobbed by journalists and told them that the Iranian people have the “right to have a peaceful and good life.”

For his part, Khamenei warned of “foreign plots” seeking to depress turnout in a speech Wednesday. A flyer handed out Wednesday on the streets of Tehran by hard-liners echoed that and bore the image of Revolutionary Guard Gen. Qassem Soleimani, who was killed in a U.S. drone strike in 2020. A polling station was set up by Soleimani’s grave on Friday.

“If we do not vote: Sanctions will be heavier, the U.S. and Israel will be encouraged to attack Iran,” the leaflet warned. “Iran will be under shadow of a Syrian-style civil war and the ground will be ready for assassination of scientists and important figures.”

Some voters appeared to echo that call. 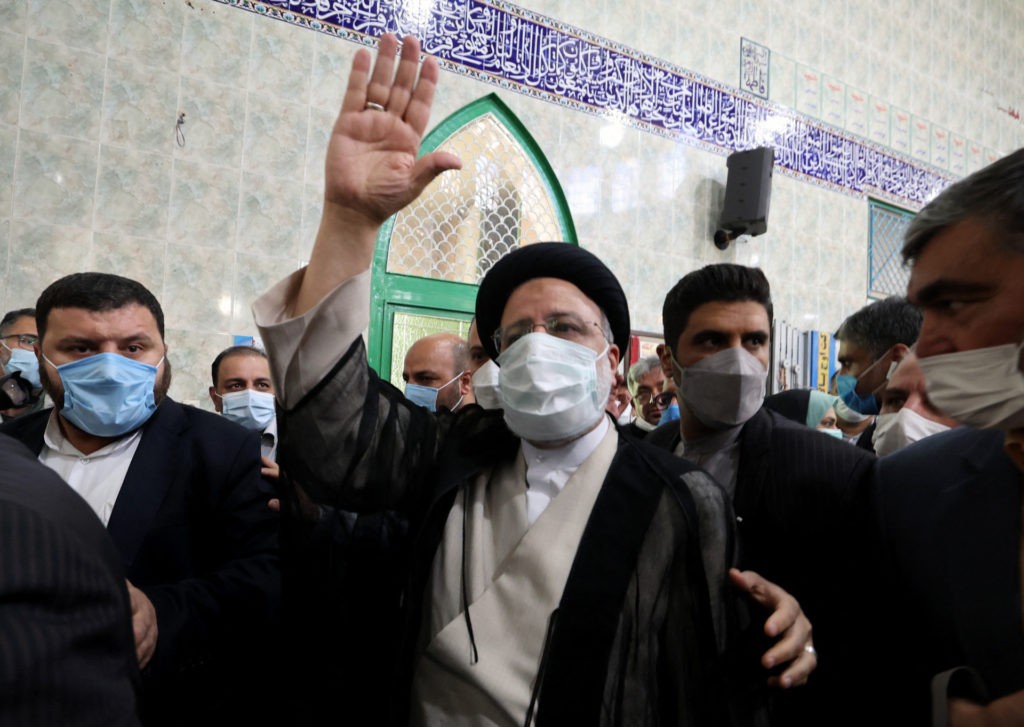 “We cannot leave our destiny in the hands of foreigners and let them decide for us and create conditions that will be absolutely harmful for us,” Tehran voter Shahla Pazouki said. “We should change our country’s situation by cooperation with each other.”

Yet the disqualification of candidates seemed aimed at preventing anyone other than Raisi from winning the election. Also hurting a moderate like Hemmati is the public anger aimed at Rouhani, whose signature 2015 nuclear deal collapsed after then-President Donald Trump unilaterally withdrew America from the accord in 2018. Iran’s already-ailing economy has suffered since, with double-digit inflation and mass unemployment.

The vote “is set to be the least competitive election in the Islamic Republic’s history,” wrote Torbjorn Soltvedt, an analyst at the risk consultancy firm Verisk Maplecroft. “There will be little need for the more overt forms of election fraud that characterized the turbulent reelection of Mahmoud Ahmadinejad in 2009.”

Rouhani, after casting his vote at the Interior Ministry, urged people to vote as it was important “for the county, the fate of people and the system.”