Beirut (AFP) — Ibrahim al-Dika had raised his Belgian shepherd Lexi since she was a tiny pup, but then Lebanon’s economic crisis made him jobless and he had to sell her to repay a bank loan.

“It got to the point where I was no longer able to feed her, the bank was pressuring me, and I hit a wall,” said the 26-year-old, devastated beside her empty kennel outside his Beirut home.

Can you afford to keep your pet? Animal activists say this is a dilemma a growing number of Lebanese owners are facing as their purchasing power nosedives.

Tens of thousands of Lebanese have lost their jobs or seen their income reduced to a pittance due to Lebanon’s worst economic crisis in decades.

As many families struggle to stay afloat, activists say increasingly more pet owners are asking for help to feed or re-home their animals, selling them, or in the worst cases abandoning them. 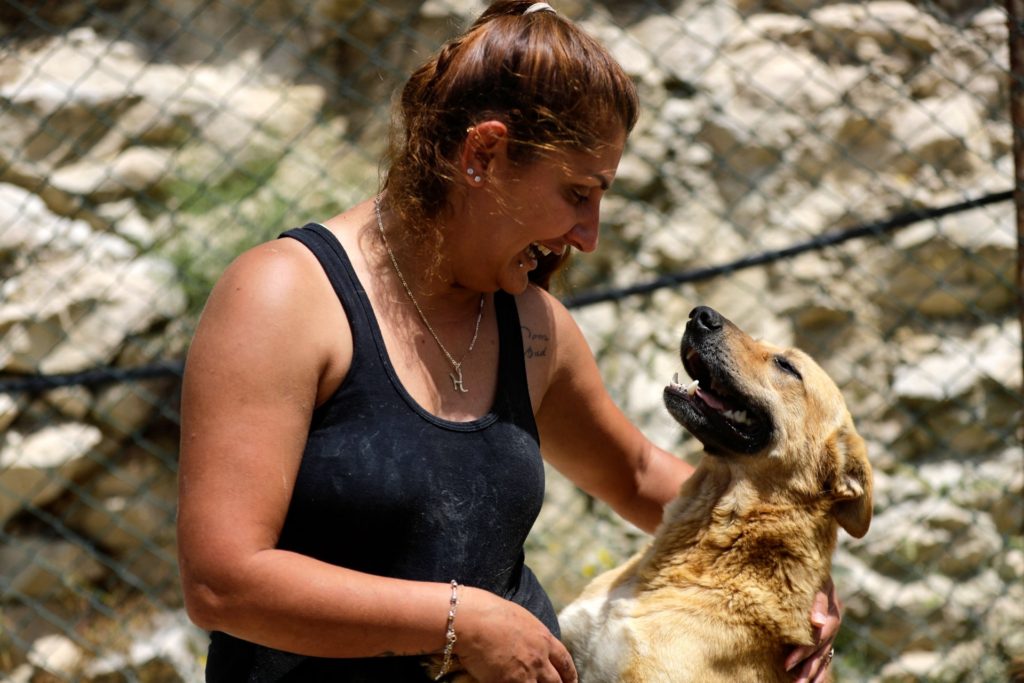 Volunteer Ghada al-Khateeb plays with a rescued dog at Woof N’ wags shelter on the outskirts of the village of Kfar Chellal south of Beirut. Tens of thousands of Lebanese have lost their jobs or seen their income reduced to a pittance due to Lebanon’s worst economic crisis in decades. As many families struggle to stay afloat, activists say increasingly more pet owners are asking for help to feed or re-home their animals, selling them, or in the worst cases abandoning them. (JOSEPH EID/AFP via Getty Images)

Dika, after losing his father to illness, was laid off last year when his employer, a fashion retailer, closed shop, affecting his ability to support his mother and brother.

He had spent around a year caring for Lexi, and training her to sit, heel, give him the paw, and play dead.

But when the bank started calling, he saw no option other than to sell her.

He drove over a few days later to check in on her, and Lexi thought he had come to take her home.

“She leapt straight into my car,” he said. “She broke my heart the way she looked at me.”

With more than half of Lebanon’s population now living in poverty, many Lebanese have to depend on non-governmental organisations to get by — even to feed their pets.

Amal Ramadan, 39, said she used to make donations to animal charity PAW. But these days it is her receiving free bags of food from them for her pit bull and bichon, Nelly and Fluffy.

Her monthly salary working in car rental, once equivalent to $1,000, is now worth just $120 because of the Lebanese currency’s sharp devaluation.

“I don’t have enough income to feed my pets,” said the widowed mother of two, who has taken on extra work to make ends meet.

Ramadan said she would rather starve than give up Nelly and Fluffy. 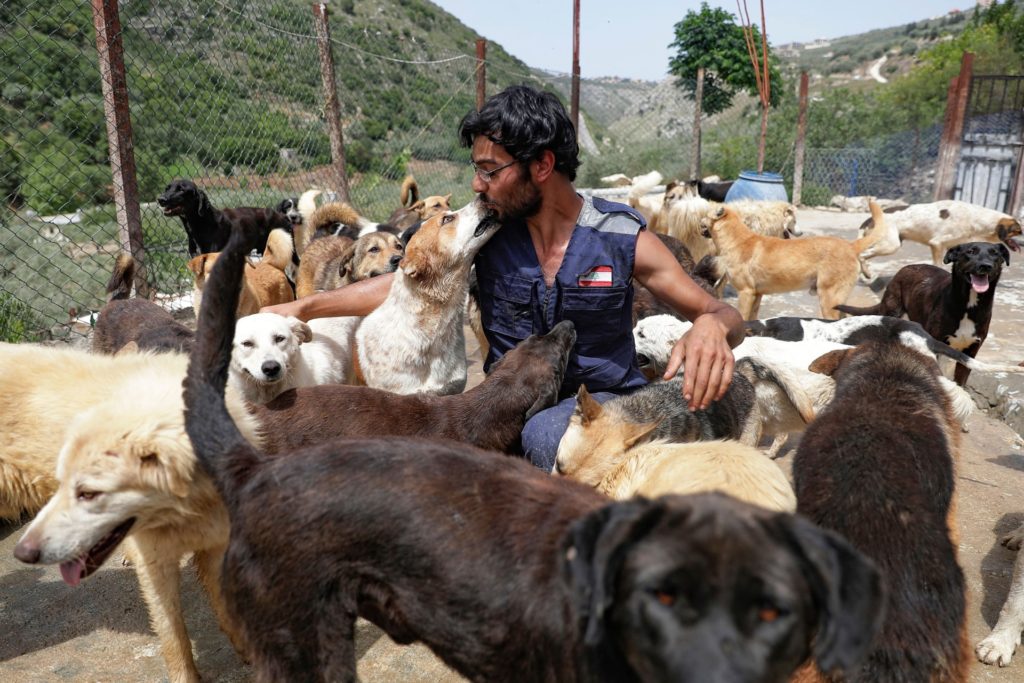 Founder of Woof N’ wags shelter Joe Okdjian plays with a blind rescued dog in the shelter on the outskirts of the village of Kfar Chellal south of Beirut. ( JOSEPH EID/AFP via Getty Images)

But as the price of imported pet food, meat and veterinary care soars, activists said some other animals have not been so lucky.

At the Woof N’ Wags dog shelter in southern Lebanon, volunteer Ghada al-Khateeb watched a female dog lying on her side, breathing weakly under a grubby white coat, after she was rescued from the local trash dump.

She said pet abandonments were on the rise.

“Nobody can afford to feed their dogs anymore,” said the 32-year-old hairdresser and divorced mother of twins.

“When they come to hand them over, they tell us: ‘our children are our priority’.”

The shelter’s founder, 28-year-old Joe Okdjian, said he was in desperate need of more donations.

“Sometimes they go a day or two without food,” he said of the 90 dogs already in his care.

As Lebanon’s economy crumbles, people’s fates are mirrored in those of their pets.

In the capital, rescuer Soraya Mouawad said two or three people a week were asking her to re-home their animal.

They say they are emigrating, moving into a smaller home, or can no longer look after them “for personal reasons”, said the founder of Animals Pride and Freedom.

Many young professionals have fled Lebanon since 2019, especially after a massive explosion in Beirut last summer killed more than 200 people and ravaged large parts of the city. 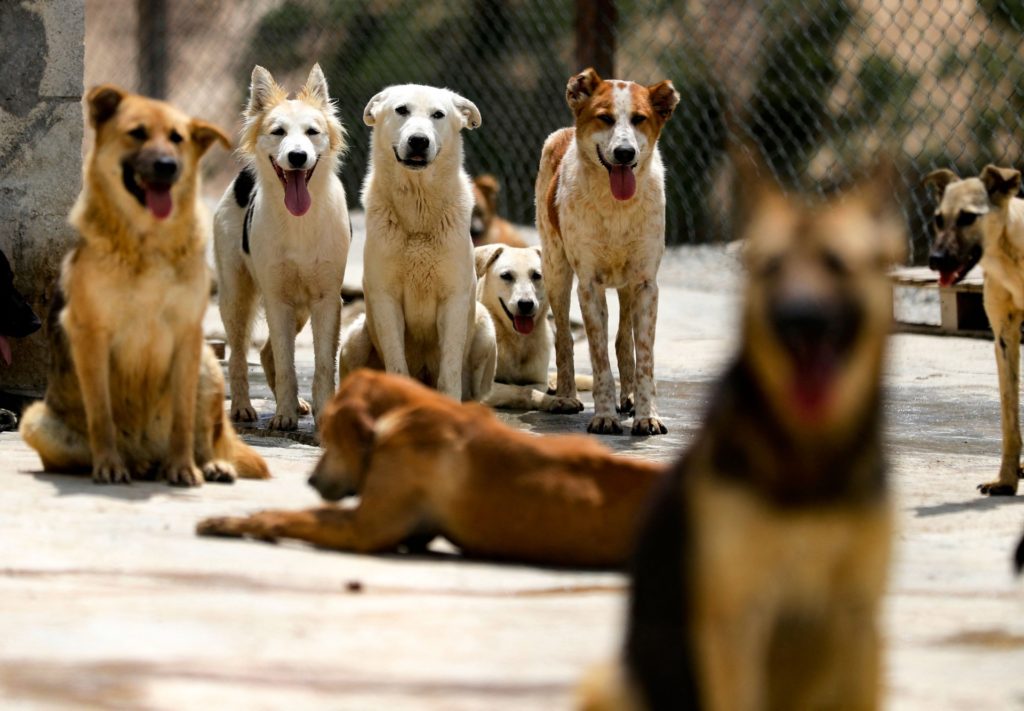 Rescued dogs are pictured at the Woof N’wags shelter on the outskirts of the village of Kfar Chellal, south of the Lebanese capital Beirut. (JOSEPH EID/AFP via Getty Images)

Dedicated activists are working to ensure dozens of pets can also emigrate.

In one room at the Animals Lebanon shelter in Beirut, two cats lay in their beds.

One of them, Hips, was hit by a car in February and is paralysed below the waist. The other, Edward, was dumped in a box in the street in November and appears to suffer from an allergy.

Soon, the charity said, Hips and Edward are set to travel to a new life in the United States.