Just before noon on Friday four friars processed down Jerusalem’s empty Via Dolorosa to commemorate the “Way of the Cross” walked by Jesus before being crucified on Good Friday.

The Good Friday procession is usually attended by immense crowds of pilgrims and tourists but, because of concerns for coronavirus contagion, this year it was reduced to a tiny contingent praying on behalf of Christians everywhere.

Among the four clerics commemorating the Via Crucis were Father Ibrahim Faltas and Father Francesco Patton, the custodian of the Holy Land for the Roman Catholic church, Reuters reported. The ritual involves stopping 14 times to mark “stations” that recall events leading up to Jesus’ death and burial.

“We are celebrating Good Friday, the commemoration of the death of Jesus, in very difficult circumstances,” said Archbishop Pierbattista Pizzaballa, the Latin apostolic administrator in the Holy Land.

“So it is important in a way, in this place, where this happened, that we can …be united in the heart, in prayer, for all those who are suffering and dying,” the archbishop said.

The leaders of the Christian Churches in Jerusalem also issued a statement, encouraging the faithful to find strength in their common prayer and united in belief.

“The message that comes from Jerusalem this year is a reminder of the resurrection itself: ‘He is not here but has risen,’” the communiqué read. “Our mission as Christians and human beings is to support each other and to continue praying for all humanity during this pandemic.” 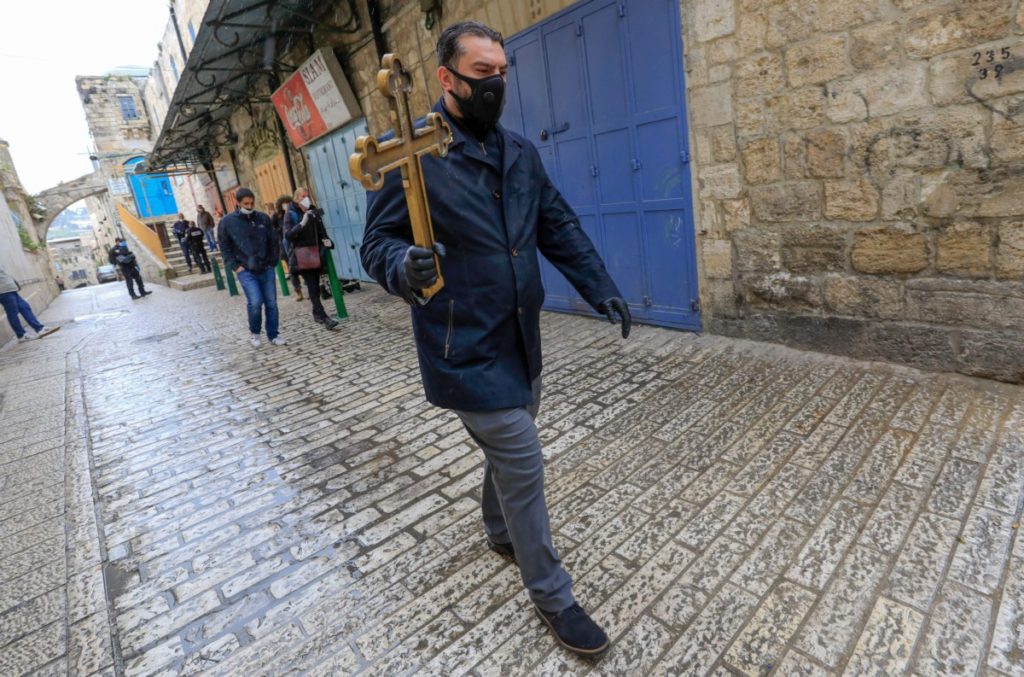 A Christian pilgrim wearing protective gear amid the COVID-19 outbreak, holds a cross while making his way alone in the Procession of the Way of the Cross along the Via Dolorosa, to mark Good Friday in Jerusalem on April 10, 2020. – All cultural sites in the Holy Land are shuttered, regardless of their religious affiliation, as authorities seek to forestall the spread of the deadly respiratory disease, which will prevent Christians from congregating for the Easter service, this coming Sunday for Catholic worshippers, then a week later on April 19 for Orthodox Easter. (Photo by Emmanuel DUNAND / AFP) (Photo by EMMANUEL DUNAND/AFP via Getty Images)

Easter “is a moment of renewal of hope and victory over all forms of death and destruction,” said the bishops and patriarchs, while also offering prayers pray for “the whole world that lives in a state of fear, anxiety, and ambiguity in the face of the COVID-19 pandemic.”

The small procession ended at Jerusalem’s Church of the Holy Sepulcher, believed to mark the place of Christ’s burial, which was allowed to be opened on Friday, having been closed to the public weeks ago in an effort to curb the spread of the coronavirus.

Good Friday is the only day of the year when the Catholic Church celebrates no Masses. In its place, Archbishop Pizzaballa presided over a service commemorating Christ’s passion and death, which entailed a reading of the gospel account of Christ’s passion, prayers for all those in need, the veneration of the cross, and a Communion service.

Easter is the most solemn celebration in the Christian liturgical calendar. This year, Easter falls on April 12 for Catholics and the following Sunday for the Eastern Orthodox Churches.