JERUSALEM (AP) — A small group of Franciscan monks and Roman Catholic faithful took to the streets of Jerusalem’s Christian Quarter in the Old City Sunday to distribute olive branches after the traditional Palm Sunday procession was cancelled due to restrictions imposed to contain the spread of the coronavirus.

Palm Sunday celebrations start the Holy Week leading up to Easter. Worshipers in Jerusalem traditionally carry palm fronds and olive branches and march from the top of the Mount of Olives into the Old City.

While thousands of pilgrims usually participate in the march, this year was limited to a handful of participants. Clerics and faithful went door to door often throwing the branches to Christians looking on from their balconies.

“This year because of the new situation we are trying to come to all the Christians in our Christian Quarter to bring these branches of olives, the sign of new hope,” said the Rev. Sandro Tomasevic, a Catholic clergyman at the Latin Parish of Jerusalem.

Palm Sunday commemorates Jesus’ entry into Jerusalem and is the start of the church’s most solemn week, which includes the Good Friday reenactment of Jesus’ crucifixion and death and his resurrection on Easter.

In Israel, more than 8,000 people have contracted the coronavirus and 46 have died. In the West Bank, nearly 200 cases have been reported, including a large outbreak in the biblical town of Bethlehem. 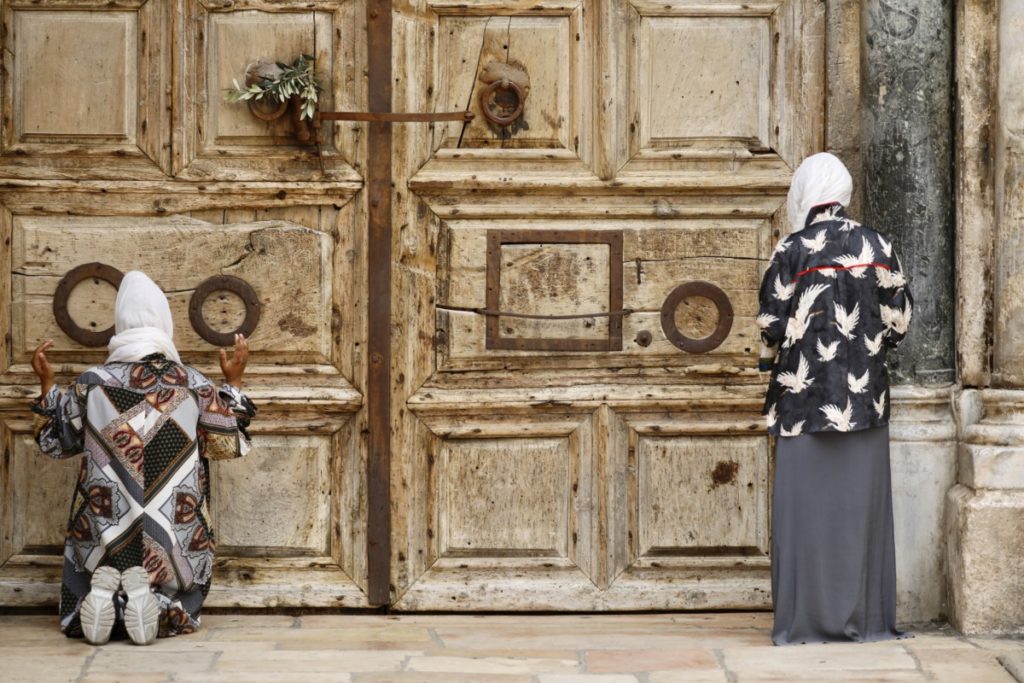 Women pray in front of the closed Church of the Holy Sepulchre, a place where Christians believe Jesus Christ was buried, as a palm hangs on the door, in Jerusalem’s Old City, Sunday, April 5, 2020. The traditional Palm Sunday procession was cancelled due to restrictions imposed to contain the spread of the coronavirus. (AP Photo/Ariel Schalit)

The outbreak has forced church officials to close churches to the public and scale back religious observances throughout the week. Archbishop Pierbattista Pizzaballa, the top Catholic clergyman in the Holy Land, held a small, closed service at the Church of the Holy Sepulcher, the site where Christians believe Jesus was crucified and resurrected.

The Israeli military began an operation in the hard-hit central city of Bnei Brak, helping to distribute food and medicine. The government last week put Bnei Brak, home to a large population of ultra-Orthodox religious Jews, under a near closure after an outbreak ravaged the city.

The coronavirus causes mild to moderate symptoms in most patients, who recover within a few weeks. But it is highly contagious and can be spread by people showing no symptoms. It can cause serious illness and death in some patients, particularly the elderly and those with underlying health issues. 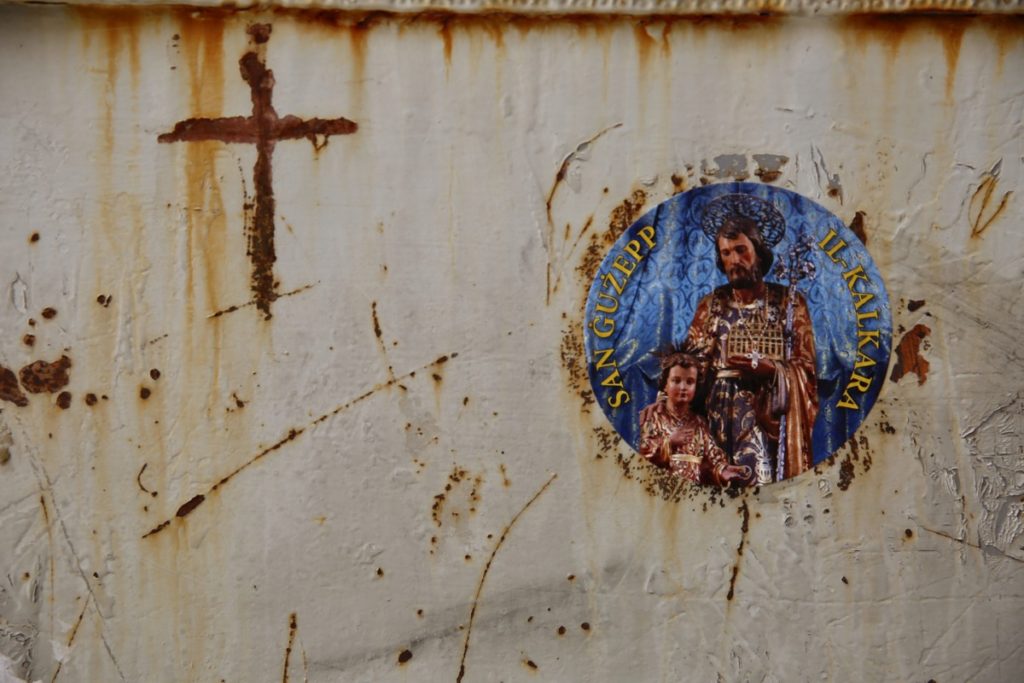 A cross and a sticker adorn a metal door leading to the closed Church of the Holy Sepulchre, a place where Christians believe Jesus Christ was buried in Jerusalem’s Old City, Sunday, April 5, 2020. The traditional Palm Sunday procession was cancelled due to restrictions imposed to contain the spread of coronavirus. (AP Photo/Ariel Schalit)

Lebanon has reported 520 cases of coronavirus and 18 deaths since the first case was reported in late February.

Churches were mostly empty for Palm Sunday in the tiny Mediterranean country, which has the largest percentage of Christians in the Middle East. Churches had marked Palm Sunday even during the country’s 15-year civil war that ended in 1990.

In some villages, priests drove in pickup trucks decorated with palm and olive branches to hold mass in the open air, as residents either stood nearby or watched for their balconies.

Nearly a third of Lebanon’s 5 million people are Christians, and the country is the only Arab state with a Christian president.