KHUZAA, Gaza Strip (AP) — Palestinians streamed on Friday to tent camps along the Gaza-Israel border ahead of what the territory’s Hamas rulers hope will be the second mass protest in a week.

As Israel and the Hamas-led protesters geared up for another showdown along the border fence, concerns grew about more bloodshed.

Just before Muslim noon prayers Friday, hundreds of people arrived at one of the tent camps, near the community of Khuzaa.

Activists plan to burn large numbers of tires in hopes that thick black smoke will block the view of Israeli snipers deployed on the other side of the border fence.

At one point on Friday, Israeli forces fired tear gas that landed inside the encampment, briefly sending people fleeing. 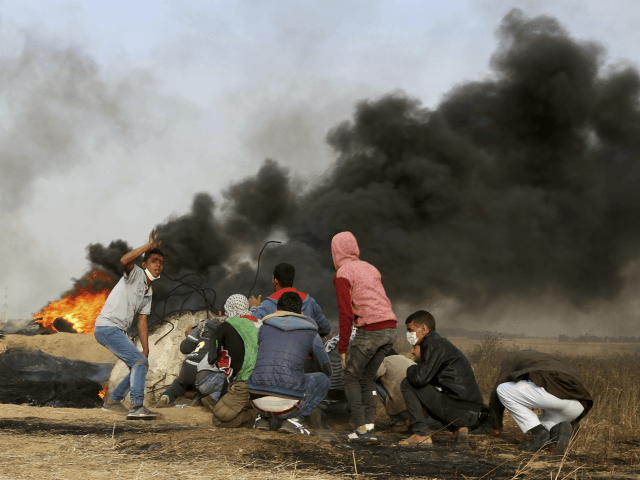 Protesters also moved toward other camps, including east of Gaza City, where a senior Hamas leader, Mahmoud Zahar, greeted the crowd. Nearby, smoke from burning tires rose into the sky.

Friday’s march is the second in what Gaza’s Hamas rulers said would be several weeks of protests against a decade-old border blockade of the territory.

Israel has accused Hamas of trying to carry out border attacks under the cover of large protests and said it will prevent a breach of the fence at all costs. 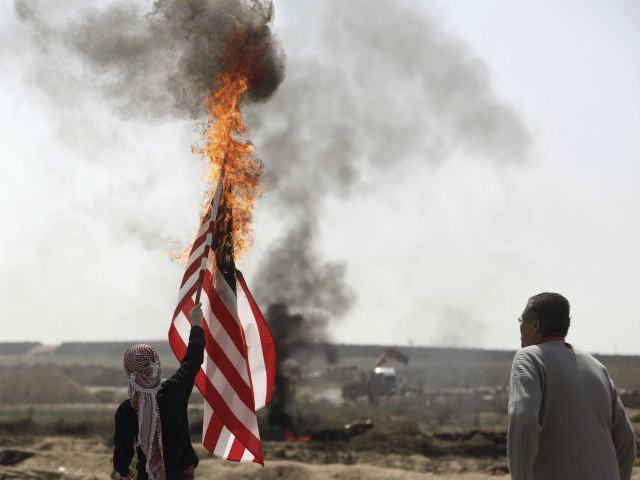 Palestinian protesters burn an American flag during a protest at the Gaza Strip’s border with Israel. (AP/ Khalil Hamra)

A White House envoy urged Palestinians to stay away from the fence. Jason Greenblatt said the United States condemns “leaders and protesters who call for violence or who send protesters — including children — to the fence, knowing that they may be injured or killed.”

Last Friday, thousands of Gaza residents participated in the demonstration, many gathering in five tent encampments that had been set up from north to south along the narrow coastal strip’s border with Israel, each at a distance of about several hundred meters from the fence. Smaller groups, mostly young men, rushed forward, throwing stones, hurling firebombs or burning tires and drawing Israeli fire.

Ahead of Friday’s march, Hamas announced it would pay compensation to families of those killed or injured, ranging from $200 to $500 per injury and $3,000 per death.

UPDATE: Hamas said that seven Palestinians were killed and over 1,070 were injured in today’s riots. Those numbers could not be immediately verified.