TEL AVIV – Palestinian factions have announced three “days of rage” beginning Wednesday in response to President Donald Trump’s announcement to formally recognize Jerusalem as the capital of Israel and transfer the American embassy to the holy city.

On Tuesday, Trump told Palestinian Authority Mahmoud Abbas that he intends to move the U.S. embassy from Tel Aviv to Jerusalem, prompting Palestinian factions to accuse the U.S. president of “political blackmail, which would destroy his ability to achieve regional or colonialist achievements in the region.”

“We call on all our people in Israel and around the world to gather in city centers and Israeli embassies and consulates, with the aim of bringing about general popular anger,” a joint statement from West Bank-based “national and Islamic forces” said.

In Bethlehem on Tuesday night, Palestinians protested the move by setting posters of Trump alight. 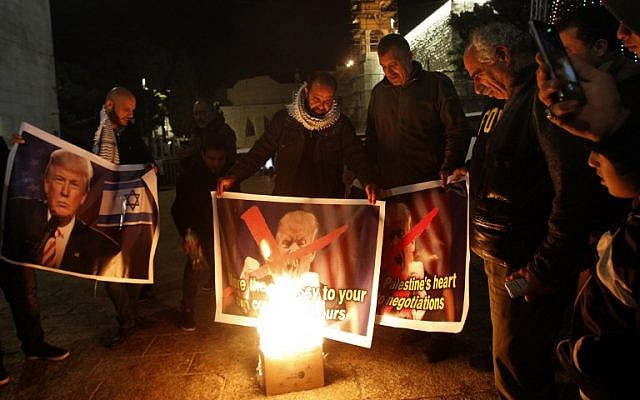 Palestinians burn pictures of President Donald Trump in protest over his expected announcement to relocate the U.S. embassy to Jerusalem (AFP/Musa Al Shaer).

Israeli security forces are preparing for possible eruptions of Palestinian violence. Thousands of police and security forces will be deployed in Jerusalem on Friday, especially around the Old City and the Temple Mount ahead of Friday prayers. There are fears that the announcement could spark so-called lone wolf terror attacks.

The U.S. State Department instructed all government employees to avoid Jerusalem’s Old City and the West Bank until further notice.

Gaza-based terror group Hamas released a statement calling on Palestinians to “make Friday a day of rage against the occupation, rejecting moving the American embassy to Jerusalem and declaring it the capital of the Zionist entity.”

Intelligence Minister Yisrael Katz warned that any “violent riots would be a big mistake for the PA.”

“I advise them not to create any escalation in the security threat and don’t take us down this road. We are ready for every eventuality,” he said, according to the Hebrew-language Ynet news site.