A pair of New York attorneys pleaded guilty to their roles in firebombing a police car in Brooklyn during a George Floyd protest in May 2020. The pair face stiff sentences under a terrorism-related sentencing provision.

New York Attorneys Urooj Rahman, 32, and Colinfort Mattis, 34, pleaded guilty in a Brooklyn federal district court to a single count of possessing or making a destructive device, Reuters reported. Prosecutors said Rahman threw a gasoline-filled bottle into an empty police car during a protest over the death of George Floyd in Minnesota. Rahman then fled the scene in a minivan driven by Mattis. 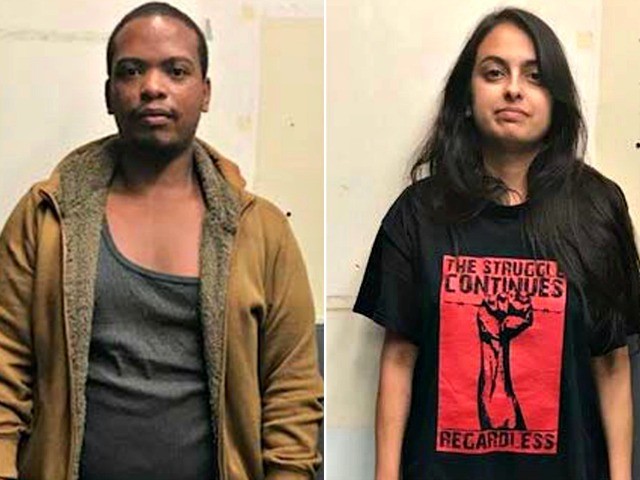 “I deeply regret my conduct and wish I had made better choices on that night,” Mattis told the judge. Rahmen also expressed regret and both parties said they expect to be disbarred following their guilty pleas.

The duo faced up to life in prison before prosecutors offered a plea agreement in February, Breitbart News reported. A surveillance camera captured an image of Rahman holding a bottle in her hand just before the attack.

Mattis — a corporate attorney with Pryor Cashman until he was furloughed last spring — graduated from both Princeton University and New York University law school.

Rahman was captured in a photo obtained by the New York Daily News wearing a Palestinian keffiyeh on her face and holding a makeshift Molotov cocktail. The keffiyeh, a chequered black and white scarf, has become a symbol of Palestinian nationalism.

Rahman is a graduate from Fordham University law school. In 2014, she did a summer fellowship internship program at the Israel based Mada Al-Carmel’s Arab Center for Applied Social Research in a partnership program with Palestine Works.

The Mada Al-Carmel center is heavily financed by George Soros through his Open Society Foundations.

As part of her Soros-backed fellowship at the Mada Al-Carmel center, Rahman spent a week with the radical Palestine Work organization.

Both subjects were held for a month without bail in New York’s Metropolitan Detention Center. The court eventually granted them release on bonds of $250,000 each.

When officers made the arrest, they “observed in plain view several precursor items used to build a Molotov cocktail, including a lighter, a Bud Light beer bottle filled with toilet paper, a liquid suspected to be gasoline in the vicinity of the passenger seat, and a gasoline tank in the rear of the vehicle.”

Following their plea, U.S. District Court Judge Brian Cogan set a sentencing hearing for February 8, 2022, Reuters stated. Each of the attorneys face up to ten years in federal prison under the terrorism-related sentencing provision.

“The terrorism enhancement is going to be a big issue. I have no idea where I’m going to come out on that,” Judge Cogan stated.

Rahman’s attorney, Paul Schectman, said the two convicted firebombers do not deserve prison time. He claimed their behavior occurred “in the heat of the moment on one of the most heated nights in modern American history.”