CARACAS — Inflation is a fearsome beast, and it’s plagued my country, Venezuela, for longer than I’ve existed.

While our tales and circumstances are quite different, now that Americans are facing it once more, it seems like a good time to send some words of warning from someone who has lived through the worst (and still ongoing) hyperinflationary spiral of modern times.

These words are intended to be a cautionary tale of just how bad inflation can become if unchecked, how it changed Venezuelan life for the worse, and where things could be headed. If a 6.2-percent inflation rate has rightfully flared up everyone’s alarms in the United States, then imagine how our life down here has been these years, when just in 2018 alone we had an 1,400,000-percent inflation rate. America’s current dramatic increase in gas prices isn’t “helping the patient” either, as we say here.

Having been born in the late 80s, I’ve never known a life without inflation, yet things were never as bad as the past decade, when the Bolivarian Revolution’s once celebrated Socialism of the XXI Century reached its inexorable collapse. While inflation has been a problem in Venezuela since before my birth, it’s no secret to anybody that it’s become an untamable beast in recent years thanks to the absolute and unmitigated disaster of socialist dictator Nicolás Maduro and the regime of the United Socialist Party of Venezuela. 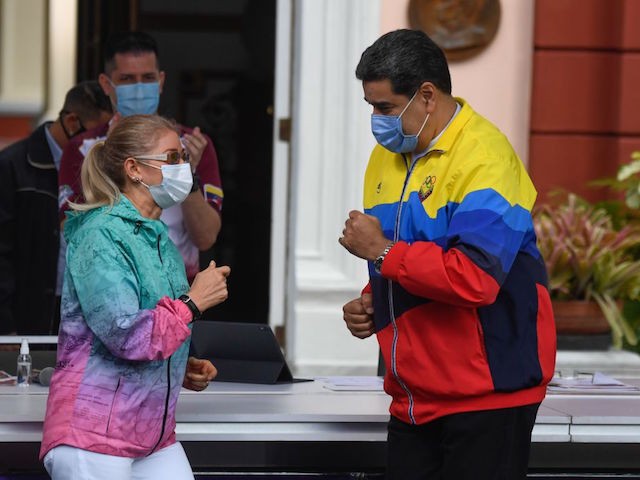 Venezuelan dictator Nicolas Maduro and wife Cilia Flores dance as they arrive to a meeting to commemorate the International Youth Day at the Miraflores Presidential Palace in Caracas, on February 12, 2021. (FEDERICO PARRA/AFP via Getty Images)

From an external perspective, finding out that both mainstream media and analysts are twisting context and creating the narrative that “inflation is good” is — insulting, to say the least. First, they tell you it’s “not happening” only for the narrative to shift to, “it’s good for you, actually.” They laugh at you while shifting the blame to others. It’s something that, based on my lifelong experience suffering through it, I can only respond with swears that are characteristic of my Zulian heritage, which I’d rather not reproduce here.

For us, inflation is a symptom of the much larger disease known as Bolivarian Socialism. It’s a tragedy, a comedy, and an ingrained part of our lives. We’ve all laughed, made memes, cried, and ultimately continue to suffer the absolute disaster of our out of control hyperinflation.

No matter how much they try to coerce you into believing it, inflation is not good for you, period.

Inflation (and then hyperinflation) in Venezuela became a game we can’t possibly hope to win but one we have no choice but to participate in. It’s entropy in its purest form, you cannot escape it all encompassing reach, and all one can do here is to keep going for as long as you can – foregoing and sacrificing bits and pieces of your average normal life until the entire concept of normalcy is devalued to such a point that you’re either poor or rich. There are no in-betweens anymore.

We once got told that inflation wasn’t real. We’ve had to restart our currency three times since 2008, with the latest restart occurring less than two months ago. A total of 14 zeroes have been slashed in this never-ending cycle of Venezuelan inflation. We’ve gone from millionaires to billionaires in the span of months — possessors of a currency that has no real value, and while we’re in a rather “calm” period right now when compared to previous years, we stand as both the country with the most expensive food in Latin America and the country with the worst minimum wage: 10 Bolivars per month (7 Bolivars of minimum wage plus 3 in food bonuses), roughly $2.20. 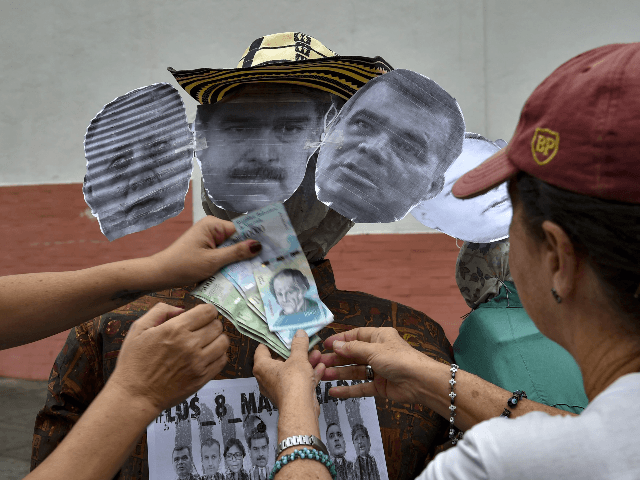 Opponents to the government place Bolivar banknotes on dummies depicting Venezuelan President Nicolas Maduro (C), Venezuelan Defense Minister Vladimir Padrino (R), and the former speaker of the Venezuelan National Assembly, Diosdado Cabello, as they prepare to burn them during the traditional “burning of Judas” on Easter Day at Chacao neighborhood, in Caracas, on April 21, 2019. (YURI CORTEZ/AFP/Getty Images)

Even in our current stagnant phase of our socialist collapse and with a brand new currency that’s not even two months old, the International Monetary Fund (IMF) projects a 2,700-percent change in consumer prices. It’s worth mentioning that official data from the socialist regime is hard to come by and is often distorted and away from reality, so even these dire estimates may be wrong.

Whether it’s 1 million percent inflation in 2018 or 2,000 percent in 2021, the damage is done. That’s why inflation is something that needs to be put in check before it’s allowed to fester.

It starts simple – a few percent here and there. The next thing you know, things that you once took for granted are out of reach. Money in your hands has to be spent — fast— because it rapidly loses purchasing power. Quotes for services last mere hours or a day or two at best because they need to be recalculated.

With securing food that’s constantly increasing in price the priority, I can’t even begin to think about investing in other purchases, such as clothing, new pair of glasses, or house renovations, all of which have increased in price, as well. 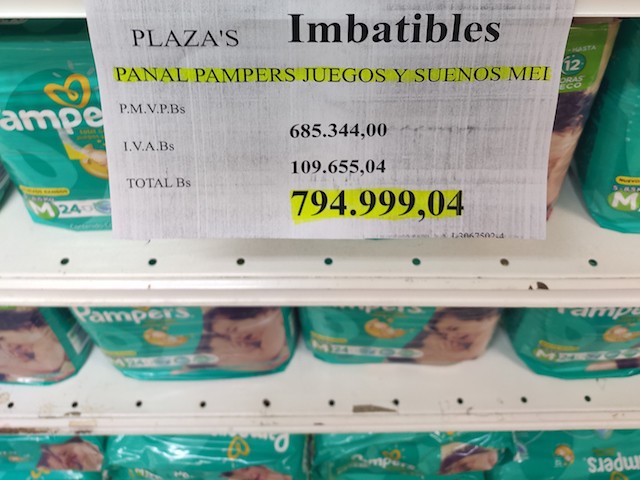 Venezuelan cash is so worthless that I still have stacks of cash that I can’t possibly fit in my wallet with absolutely zero value beyond as a collector’s item, as post-it notes or origami, or repurposed to create art. Whatever innovations we’ve had in the field of banking and payment processors have been dictated by inflation first and foremost.

It really changes how you tackle your finances and how you approach money – moreso when you’ve had to live with a currency that rapidly loses value by the hour. Not only have I had to adjust my budget almost on a weekly basis to cover everything necessary, I’ve had to start foregoing other things so as to get more essential groceries because chances are they’ll be more expensive the next time you visit a supermarket. It makes you paranoid and borderline excessive when it comes to taking measures to mitigate.

From wire transferring millions just to pay for a water refill to weighing stacks of cash, every investment in the development of local payment apps, e-banking user interfaces, and overall network infrastructure has been done with the explicit goal of improving payments. When you’re spending 200 million on groceries, 50 million on water, and 300 million on a spare part, you need to have user-friendly tools.

You either spend more on food or start cutting costs, even if you’re technically earning more. That’s how my life has been all these years. Just this month alone, I’ve had to buy less meat just to stay within the same budget. There are things that I once took for granted that I cannot justify spending on these days.

You start buying things in advance for this matter and, after years of inflation, I have a very bad habit of always having a buffer stockpile of everything for this reason (and because of the steep shortages that plagued us during the worst years of socialist collapse and regulations). That ketchup you like so much? It could very well cost 10-20 percent more the next time you see it on the shelves. I’ve been there.

Thanks to inflation, I don’t even remember the last time I paid with something using coins. Our coins are so worthless that a few years ago, it was better to cut a hole in them and use them as washers. Fast food is a luxury and even the “middle class” is considered poor in this country.

Holiday traditions are not exempt, either. As with the past years of my life, I certainly won’t be having the full Venezuelan Christmas traditional dish and will just do something simple and within budget. With Americans about to face the most expensive Thanksgiving in its history, I wholeheartedly sympathize with you.

It’s never been uncommon for Venezuelans to seek alternative ways to save money beyond every dead iteration of the Venezuelan Bolivar. Foreign currency was (and still is) the first and foremost way to pay, even during the years when it was outright illegal to use it. Cryptocurrency, to a much lesser extent, has become another alternative for us. Others sought a solution in purchasing precious metals, while others did so through purchasing appliances, collectibles, hardware — anything nonperishable, so long as it’d help you get rid of the Bolivars in your hands before they start to rot.

Businesses start to cut down on costs to stay afloat and the quality of service drops noticeably almost everywhere. Fast food places here forego napkins, straws, and other amenities so as to help stave off inflation but, like I said, you can’t possibly hope to win against inflation so long as what’s causing it is not addressed.

Hubris and inflation often go hand-in-hand. Be very cautious if the Democrats or any representative of the current U.S. government deflects any possible responsibility for the soaring inflation and instead places the blame on others — that’s something that to this day still occurs here.

Dictator Nicolás Maduro, and the Socialist Party of Venezuela, continue to blame our economic collapse and absurd inflation on an “Economic War” allegedly being fought against the United States and other free countries. 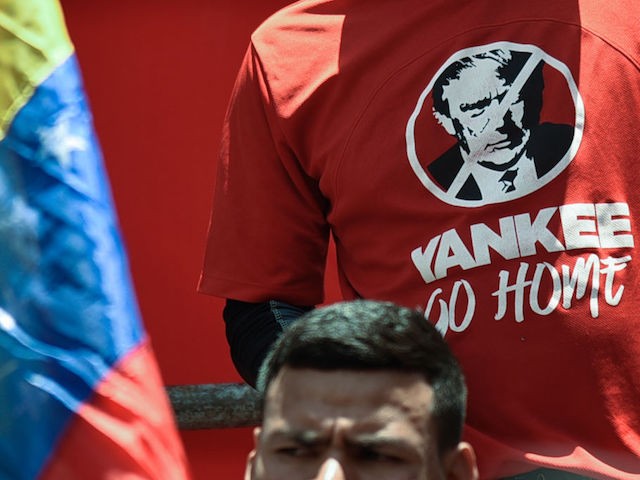 There was a time long ago when our currency was worth more than the U.S. dollar. Now look at us. We look up to America for its stability, freedom, and actual functional currency. As a matter of fact, the only reason some of us down here are relatively afloat is because of the U.S. dollar. The socialist regime of Venezuela sure loves to hate it, but can’t part ways with it as it’s holding what’s left of our economy together.

I’m not an American citizen and don’t live in America, but I have plenty of American friends and acquaintances, from hard-working plumbers, farmers, service industry professionals, IT professionals, and more. Inflation affects them all the same. Having suffered through one of the worst and maximum expressions of inflation throughout my life, it is something I do not wish for them to go through — or anyone else for that matter, because it’s not a good way to live.

I’ve long since come to terms that there’s little I can do to fix my country. All I can hope is that our tale continues to be heard as a ominous portent of how bad things can really become, and that nobody else repeats our mistakes, especially America.