The Australian network SBS found a Cuban refugee among the throngs of thousands of migrants on the border between Belarus and Poland. In an interview published on Monday, Juan Carlos told SBS he was one of seven Cubans attempting to escape communism into Europe after making it to Europe’s last dictatorship.

The communist regime of Belarus, run by dictator Alexander Lukashenko, opened its border with neighboring Poland this month, an attempt to overwhelm the European Union’s immigration system and considered by some observers an act of war against its democratic neighbors. Most migrants on the border are believed to be from the Middle East or South Asia. The Cuban refugee identified as Juan Carlos told SBS that he made it to Belarus through visa-free travel with Cuba’s longtime ally Russia.

Cuba, like Belarus, is a longstanding communist regime that systematically oppresses its people. Like Belarus, it has experienced growing waves of anti-communist peaceful protest and responded to them with excessive state violence and mass imprisonment.

Prior to the administration of President Barack Obama, the United States welcomed Cuban refugees who touched land in the country through a policy known as “wet foot, dry foot.” Obama rescinded the policy – a boon for human traffickers in Central America and Mexico, where a surge of Cuban refugee migration into the U.S. Southern Border has occurred.

In broken English, Juan Carlos told SBS that he had initially arrived in Moscow via visa-free travel.

“In Moscow, I [receive] information [to go to] Belarus and then go to,” Juan Carlos explained, pointing at the Polish border. He noted that Poland had not let him through after two attempts, and suggested he would try again. He also suggested he may return to Moscow, but that Russian officials arrested Cubans seeking to escape communism.

His ultimate goal, the refugee said, was to arrive in Germany.

Juan Carlos said he was one of seven Cubans trapped in the chaos on the Polish border.

Among the #refugees at the Belarusian-Polish border, seven are Cuban citizens#cuba #Belarus #Poland #BelarusBorder pic.twitter.com/mDBHkBxRZ5

Last week, NPR caught up with two other Cubans in Belarus, who explained that they, too, had traveled from Havana to Moscow. Doniel Machado Pujol told NPR that he and his fellow refugees had endured ten days without food or water in the frigid Belarusian forest and had survived by drinking river water.

Humanitarian aid worker Kalina Czwarnog told NPR that Belarus had been “inviting” refugees to the country with promises of entry to the European Union.

Belarus unilaterally opened its border with Poland this month, sending a rush of refugees towards Poland and triggering violecne and chaos. Some migrants used rocks and other rudimentary weapons to attack Polish police, prompting the use of water cannons to subdue the mob.

“Europe, our common home, is threatened. At this very moment, a hybrid war is taking place on the Polish-Belarusian border which Alexander Lukashenko, with the backroom support of Vladimir Putin, has declared against the entire European Union,” Polish Prime Minister Mateusz Morawiecki said in a video statement on Sunday. “From a distance, these events may look like an ordinary migration crisis, but they are not. This is a political crisis created for a special purpose. The objective is to destabilise the situation in Europe first time since the end of the Cold War, 30 years ago.”

The situation parallels the Mariel Boatlift of 1980, in which Cuban communist dictator Fidel Castro emptied the prisons of the island – including a prodigious number of political prisoners – and sent 125,000 people into the United States. While a significant percentage of the people freed into America were not prisoners, Castro insisted in his publicity campaign for the move that they were all useless “lumpen” proletariat and joked that the Cuban refugees coming from America to help those he cast to the sea were doing Cuba an “optimum sanitary service” by cleaning up the “scum.”

Lukashenko, in an interview with BBC this weekend, was only slightly less obnoxious about the Polish border.

“Our guys are helping the migrants get into Polish territory? It’s perfectly possible, I think that’s absolutely possible. Maybe someone helped them. I won’t even look into this,” he shrugged.
Lukashenko attributed the chaos on the border to the Slavic identity of Belarusians: “We’re Slavs. We have hearts. Our troops know the migrants are going to Germany.” 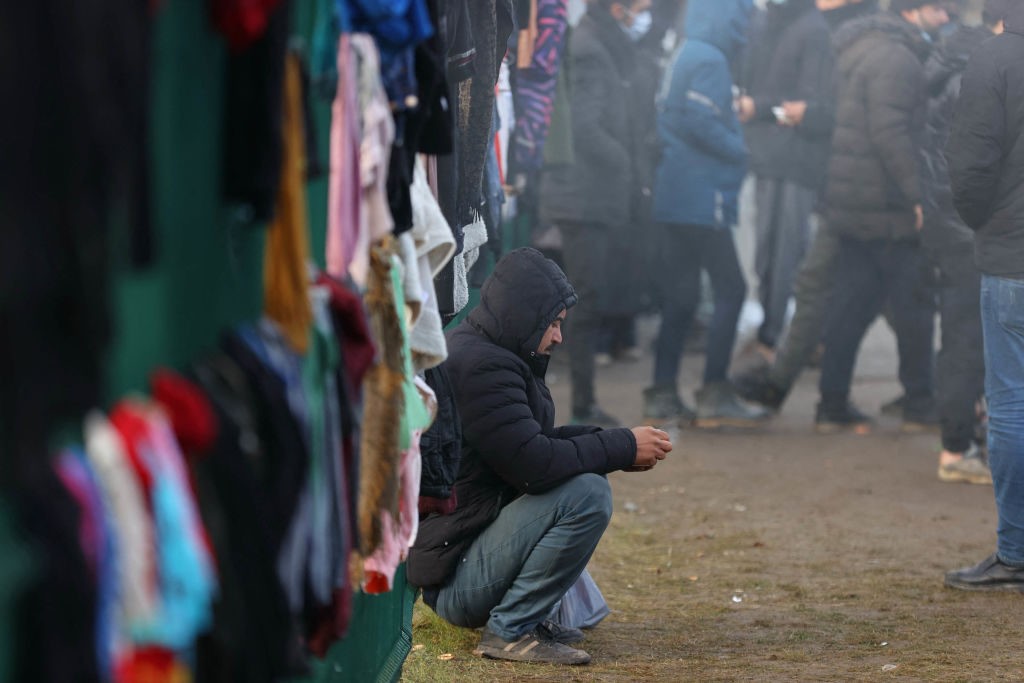 Migrants receive food outside the transport and logistics centre near the Bruzgi border point on the Belarusian-Polish border in the Grodno region on November 22, 2021. (ANDREI POKUMEIKO/BELTA/AFP via Getty Images)

“I told the EU I’m not going to detain migrants on the border, hold them at the border, and if they keep coming from now on I still won’t stop them, because they’re not coming to my country, they’re going to yours,” he promised.
Cubans have been forced to find alternate routes to freedom since President Obama issued a pro-regime policy towards Cuba in 2014 and ended “wet foot/dry foot” in 2017. Cuban refugees at the time asserted that, while attempting to appear welcoming to migrants, Obama had implemented harsh measures against Cubans as revenge for widespread Cuban-American support for former President Donald Trump. “Wet foot/dry foot” was longstanding law since 1966.

Under President Joe Biden, the United States has reinstated austere expulsion measures against Cuban refugees. In the aftermath of the national protests on July 11, the Department of Homeland Security (DHS) – notoriously doing little to stop human trafficking on the southern border – issued a threat to any American citizen considering helping Cubans adrift on the high seas attempting to reach America.

DHS has boasted of several mass deportations of Cubans at sea while migrant caravans – now featuring large numbers of Cubans thanks to Obama’s policy – continue to congregate on the land border.