The ruling United Socialist Party of Venezuela (PSUV) swept 20 of 23 governorships in the country, as well as control over the Caracas capital district, on Sunday in a characteristically fraudulent and violent election – this time with the blessing of the socialist “opposition.”

The dictatorship of Nicolás Maduro, who has not legally been president of Venezuela since 2019, has a long history of organizing sham elections featuring no meaningful opposition on the ballots, roving violent gangs threatening voters, and the mysterious addition of “late-night” voting after regular hours, yielded an embarrassingly low voter turnout. Despite the absence of fair elections in the country since at least 2015, a group of opposition leaders who have come to define the anti-Maduro left in the country chose to participate, nominating candidates for gubernatorial and other regional positions.

The elections marked the return of the Democratic Unity Roundtable (MUD), a coalition of leftist anti-Maduro elites that had previously supported several sham elections in the country. The MUD had abstained from participation for three years in response to the widespread popular disapproval of doing so. During that time, current President Juan Guaidó assumed the reins of the establishment opposition and has opposed participating in such elections. This time, Guaidó, who has never actually exercised any executive power, neither called for voting in these elections nor for opposing them after being left out of the negotiating process between Maduro and the MUD to get on the ballot.

As a result of agreeing to host elections, Maduro allowed the return of several opposition leaders from exile to participate in elections. None appeared to have won at press time, though voting in some areas remains in process.

Not all high-profile members of the Venezuelan opposition approved of the election. Antonio Ledezma, the former mayor of Caracas now in exile, lamented on Monday, “Nobody won; democracy lost.”

“The narco-dictatorship has imposed its scheme on a country where its people are corralled and orphaned … the infiltrated and collaborators fulfilled their dishonorable role,” Ledezma wrote on Twitter.

The election monitoring platform Guachimán Electoral, run by a coalition of Venezuelan journalists, published a map of the results, which showed essentially total control for the ruling PSUV as a result of state-sponsored violence, intimidation, and fraud, according to some observers. 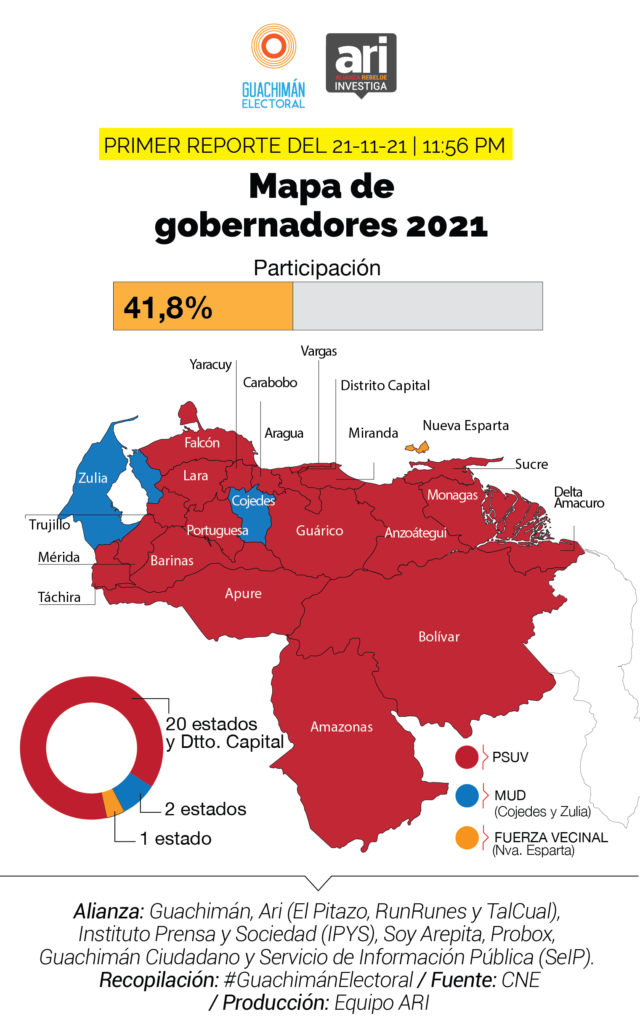 Rubén Chirino Leañez, who runs the Venezuelan polling firm Meganálisis, told Breitbart News on Monday that the alleged 41-percent turnout in the elections was the result of intimidation and fraud, stating that the true participation rate during legal voting hours was closer to 28 percent.

“Up to the legal time [to vote], 6 pm, participation was 27.9 percent,” Chirino told Breitbart News, “but then, as usual, there were five or six nocturnal voting hours where they do all sorts of things and the CNE announced 41 percent at midnight.”

Asked if the extra votes were real people voting under duress or fake ballots, Chirino replied, “a little bit of everything – coercion and pressured [voters], voting tables left alone where identities are fradulently usurped – when the night falls everything happens.”

Chirino asserted on Monday that the types of intimidation tactics used included pressuring people who rely on the state for life-saving medication or threatening those who do not own their homes with losing them.

“Venezuelans mostly want to escape socialism, and when this possibility appears in an electoral context, voter turnout will increase. As long as that is not the case, the same thing will keep happening,” Chirino continued, “where political dinosaurs resurface to be loser candidates, who fundraise and support the show, where the government varnishes itself with legitimacy, and others blackmail with unity, but they are all equally socialist.”

The NGO Venezuelan Penal Forum, which tracks repression in the country, reported at least 13 politically motivated arrests on Sunday, noting that several arrests remain unconfirmed, but likely, in Lara state. The arrest targets were all opponents of the Maduro regime.

“The election also counted with complaints of out-of-order voting machines that were never replaced,” Runrunes noted. “This occurred mostly in centers whose voters traditionally support the opposition.”

The European Union sent observers to Venezuela for the event, who said on Sunday they believed the elections occurred “with tranquility.”

“Up to today they have risen to the occasion, respecting the Constitution and the laws – hopefully, it will remain like this through the end of their observation mission,” Maduro said on television Sunday of the E.U. representatives.