The National Commission of Research Ethics of Brazil is accusing medical researcher Flavio Cadegiani of treating coronavirus patients in the Amazon with unproven, and potentially dangerous, testosterone blocker therapy without properly informing patients of their rights, the outlet UOL reported on Wednesday.

Cadegiani published the results of his study in June, finding that hospitalized Chinese coronavirus patients were 77 percent less likely to die when treated with proxalutamide, a drug previously being researched for use against prostate cancer. No medical authority in the world has approved the use of proxalutamide, which inhibits the body from generating male hormones, to treat any medical issue.

The study, Cadegiani’s Corpometria Institute proclaimed in July, found “a dramatic reduction of mortality rate of almost 80% considering all patients and more than 90% when only patients that completed treatment were considered.”

“The strong findings leave very few doubts regarding the efficacy of proxalutamide,” it concluded.

“The reported results would be a miracle—if they were true,” epidemiologist Jesem Orellana told BMJ about the study this week, emphasizing that many irregularities around the results suggest, at the very least, procedural errors.

“There are almost no medical interventions in the history of medicine that have this magnitude of benefit, no less with COVID-19 [Chinese coronavirus],” Eric Topol, executive vice president of Scripps Research Translational Institute, told Science in July.

The study caused controversy immediately, largely due to the extremely high death rate of subjects. Over 200 of the 645 patients in the trial died; Cadegiani has asserted most were in the placebo group and that the death rate was not inconsistent with death rates for coronavirus patients in Brazil’s Amazonas state at the time. 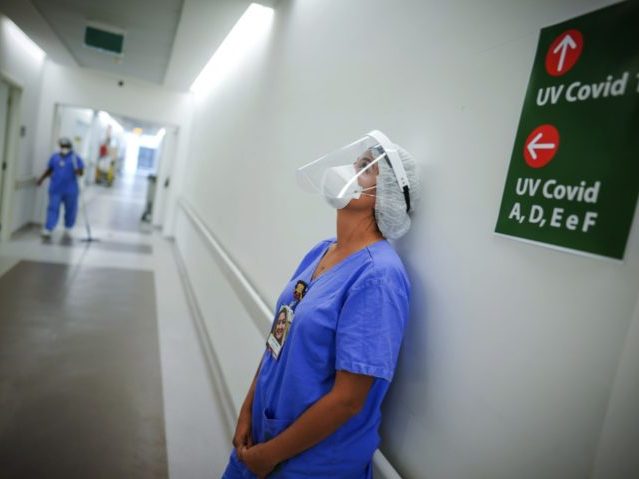 In this March 19, 2021 file photo, a health worker pauses in the ICU unit for coronavirus patients at the Hospital das Clinicas in Porto Alegre, Brazil. (AP Photo/Jefferson Bernardes, File)

In October, the Spanish newspaper El País published testimony of the niece of one of the women who died in the study, who asserted they did not entirely understand what the researchers were doing and that she noticed an immediate decline in her aunt’s health following the implementation of a variety of medications including proxalutamide.

Cadegiani himself has become a controversial figure due to his early discussion of the use of ivermectin – a drug floated, but unproven, as a coronavirus treatment – and hydroxychloroquine, another potential coronavirus treatment the mainstream global medical community has loudly rejected. Brazil’s Congress charged him – along with dozens of others, including President Jair Bolsonaro – with “crimes against humanity” for his alleged role in the severity of Brazil’s coronavirus crisis.

Brazil has documented nearly 22 million cases of Chinese coronavirus since the pandemic began and upwards of 600,000 deaths at press time.

The National Commission of Research Ethics (CONEP), the Attorney General’s office, and the Federal Public Ministry of Amazonas (MPF-AM) are all investigating the issue of questionable consent in Cadegiani’s study, UOL reported on Wednesday. All medical studies must go through CONEP for approval. According to UOL, the Cadegiani team submitted for approval a consent form to be given to patients that was eight pages long and discussed the protocol of the study in detail – but patients allegedly received a three-page form omitting risks and details of the study, which the outlet claimed to have been privy to.

Patients at the Samel Hospital received the three-page document, the outlet reported.

Among the provisions omitted from the document that CONEP appears to believe patients actually received is one that states that they can drop out of the study at any time.

“The suppression of the above information makes it impossible to know the research participant’s rights regarding the guarantee of full freedom to refuse to participate or withdraw their consent, at any stage of the research, without any penalty,” CONEP’s objection to the study, as reported by UOL, stated.

Another would have warned patients that the anti-androgen they received could cause severe deformities in unborn children if either the mother is on the drug while pregnant or the father is during conception. The consent form the researchers submitted to CONEP would have banned patients from trying to get pregnant for 90 days after the study.

The medical journal BMJ reported on Wednesday that Brazil’s National Health Council (CNS) had also launched a major investigation into the study, finding that the over 200 deaths that occurred during the trials may have been needless.

“Some of those people were not adequately informed of the risks they were undertaking in the trial, and some did not know that they were taking part in one, [CNS] said,” according to BMJ. CNS also denounced several other apparent irregularities.

“The treatment was prescribed by doctors as if it were an established medical treatment, said the CNS, although it was approved only for clinical studies,” BMJ reported. “The number of people given the drug was also larger than the number approved for the trial, and they were administered through a private hospital network in the Amazon when the trial was approved in the capital, Brasilia.”

Jorge Venâncio, the coordinator of CONEP, asserted that the alleged miraculous findings from the study should have prompted Cadegiani to stop and treat the control group to prevent deaths. “They subjected 200 people to die in research that has no scientific value at all” if that was not the case, the coordinator said. 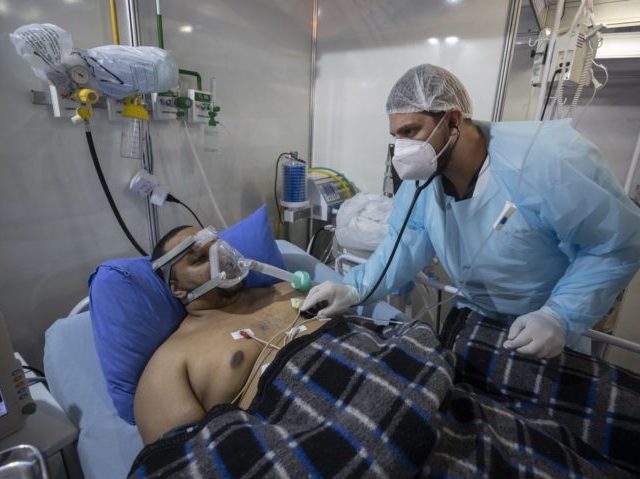 CONEP also asserted that researchers reported different death rates, at one time stating only 170 people had died, which has called into question if the dead were truly all in the control group.

“This unusually high number of patient deaths in the study, along with the lack of critical analysis that allows for the cause of death to be known, suggests that the deaths may have been caused by drug toxicity or research procedures,” Brazil’s Congressional committee on coronavirus wrote in its draft “crimes against humanity” charges against Cadegiani.

Among other apparent legal issues were the fact that CONEP approved a study in one hospital for 294 people – not over 600 people in multiple hospitals; that researchers claimed the study would occur in Brasilia, not Amazonas; and that they claimed the patients would be “mild to moderate” coronavirus cases and, in reality, many of the trial’s victims were critically ill.

El País’s report in October depicted an atmosphere of terror in the study from the perspective of patients and their families. Alessandra Mota, whose aunt Zenite Gonzaga Mota died in the studies after receiving proxalutamide, told the Spanish newspaper they had no idea they were part of a clinical trial.

“They never explained to us what the medicine was or that it was a study,” Mota told the newspaper. “We were only given a form that we signed because we trust the doctors. People here in the country are humble, they have no knowledge and were desperate.”

Mota said researchers gave families three proxalutamide pills a day but made the families responsible to ensure that patients were taking them, with no follow-up. The elder Mota, in her 70s, also received hydroxychloroquine and ivermectin, according to her niece.

Mota said her aunt was walking normally and merely short of breath on occasion before starting treatment. Afterwards, she endured diarrhea, bloody urine, food bruises, and extremely high pulse rates until she died.

Cadegiani purports to be an endocrinologist specializing in sports medicine who has taken an interest in alternative coronavirus research. His name has repeatedly surfaced in Brazilian media throughout the pandemic as he has been among the first to consider several popular, unproven coronavirus treatments. In July 2020, at the height of the hydroxychloroquine craze, Cadegiani addressed the potential use of ivermectin, a deworming agent, for treatment or prevention of coronavirus. He notably did not recommend it, writing, “but who am I to judge?”

Cadegiani instead warned Brazilians that quality control in the country on ivermectin production was not high and that he was not aware of studies regarding alcohol use with the drug, so he urged people using it not to drink.

Cadegiani revealed that month that he, himself, had tested positive for coronavirus and that he had begun a treatment of azithromycin, an antibiotic, and nitazoxanide, an anti-parasitic. He reportedly did not use hydroxychloroquine, ivermectin, or anti-androgens on himself. He claimed at the time the treatment was part of a clinical study conducted by Brown University. Cadegiani appears as a co-author on such a study published in September along with a Brown University researcher.

The researcher has vocally, and repeatedly, defended his research, asserting that accusations of “crimes against humanity” and other atrocities were due to Bolsonaro mentioning his research positively. El País, to which Cadegiani sent a statement defending his work, noted that even Bolsonaro had only mused aloud that the study appeared promising but had said it was “not yet scientifically proven.” 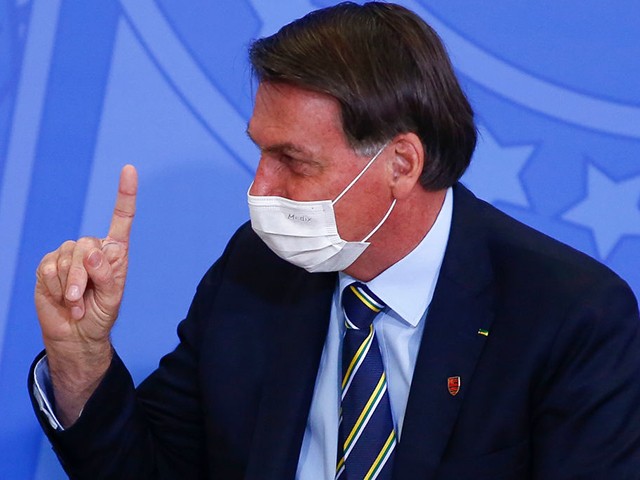 Brazilian President Jair Bolsonaro gestures as he wears a facemask during an official ceremony at the presidential office in Brasilia, on June 17, 2020. (Sergio Lima/AFP via Getty Images)

Cadegiani issued statements this week to both BMJ and UOL on the accusations. He told the former “that the trial was approved for a minimum of 294 patients rather than a maximum, that his team was well trained to inform patients of risks, and that the mortality rate was in keeping with that in the region at the time.”

“He has taken legal action against the head of CONEP, Venâncio, for disclosing private information in his statement on the trial, which Venâncio denies,” BMJ noted. “Political polarisation in Brazil is driving an ‘international movement’ in opposition to proxalutamide and explains why his paper was rejected from other major science journals, he said.”

“The model of the Informed Consent Form (FICF) prepared and sent to the local researchers in participating hospitals is exactly the same approved by CONEP, containing all the information mentioned,” Cadegiani told UOL, addressing the consent form specifically. “The form prepared is in accordance with all applicable norms, and the training given to researchers highlighted all the risks and precautions to be taken, as well as their rights and guarantees in the face of participation.”

Cadegiani also insisted that the confusion stemmed from a false consent form circulating on social media.