A Haitian gang still, at press time, is holding hostage a group of 17 Christian missionaries and children, including 16 Americans and a Canadian citizen.

“Widespread fuel shortages may limit essential services in an emergency, including access to banks, money transfers, urgent medical care, internet and telecommunications, and public and private transportation options. The U.S. Embassy is unlikely to be able to assist U.S. citizens in Haiti with departure if commercial options become unavailable,” the State Department warned.

A State Department official told the Associated Press it does not have exact figures on how many Americans are in Haiti because “U.S. citizens are not required to register their travel to a foreign country.”

A security alert from the U.S. Embassy in Haiti advised Americans to “avoid all unnecessary travel and remain vigilant, as the security situation continues to be highly unpredictable.”

The Embassy noted a Level 4 “Do Not Travel” advisory for “kidnapping, crime, and civil unrest” is in effect. The advisory warns “kidnapping is widespread and victims regularly include U.S. citizens.”

Canada on Thursday announced it was “temporarily withdrawing non-essential Canadian employees as well as family members of Canadian embassy staff from Haiti.”

The missionaries kidnapped over three weeks ago remain in the hands of Haiti’s “400 Mawozo” gang, whose self-deprecating name means “400 Idiots.” The kidnappers are demanding $17 million in ransom.

400 Mawozo began as roughly a dozen idiots pulling stickups on motorcycles but has swelled to become a significant terrorist threat that controls turf near Haiti’s capital of Port-au-Prince. Their territory includes numerous small houses that can be used as hideouts. Like the Islamic State or al-Qaeda, the gang releases Internet video communiques recorded by masked gunmen, only their lead spokesman favors a Spider-Man mask. 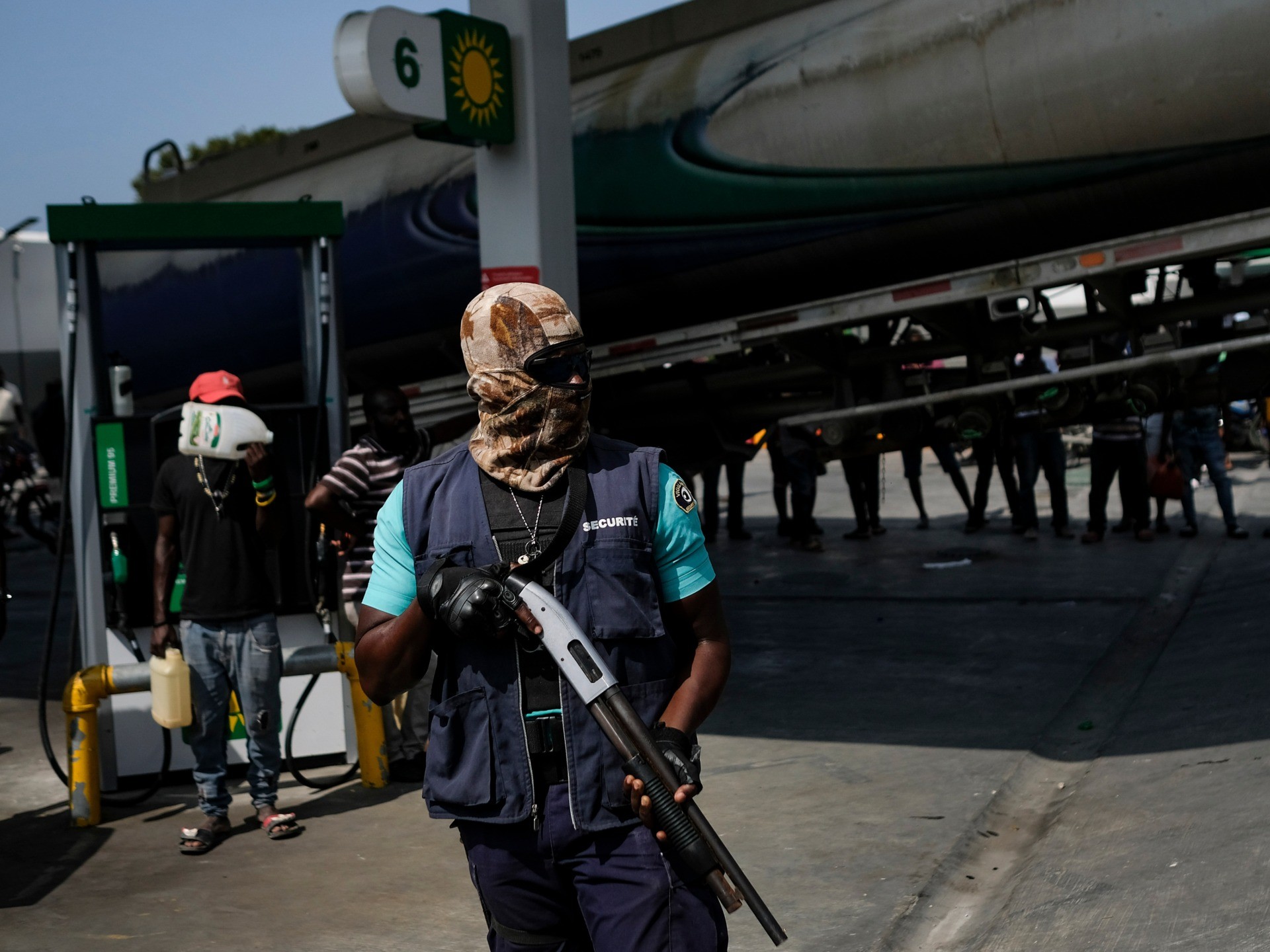 FILE – An armed security guard stands at a gas station as a tanker truck brings fuel to the gas station in Port-au-Prince, Haiti, Oct. 31, 2021. The U.S. government is urging U.S. citizens to leave Haiti given the country’s deepening insecurity and a severe lack of fuel that has affected hospitals, schools and banks. Gas stations remained closed on Thursday, Nov. 11, 2021, a day after the State Department issued its warning. (AP Photo/Matias Delacroix, File)

The Biden administration announced weeks ago that President Joe Biden was directly involved in efforts to free the hostages, with National Security Adviser Jake Sullivan claiming he “personally” updates Biden daily on the situation.

Sullivan said on October 26 the administration sent “a significant number of law enforcement specialists and hostage recovery specialists to work closely with the ministry, the families and the Haitian government to try to coordinate and organize a recovery.”

No progress has been made on a rescue, although on November 5, an unnamed Biden administration official told Reuters the U.S. government “has seen proof that at least some members of the group of American and Canadian missionaries” are still alive.

Haitian officials said gangs have disrupted fuel shipments and trucking across the country, with stolen gas and goods resurfacing on gang-controlled black markets. Schools and hospitals are shutting down for lack of electricity and supplies. Food prices are spiking, and even drinking water grows scarce because there is not enough power to purify and pump it.

A gang called G9, whose leader Jimmy “Barbecue” Cherizier is a former police officer, took control of Haiti’s largest fuel terminal three weeks ago and choked off 70 percent of the nation’s gasoline supply. G9 said it will not release the stolen fuel until Prime Minister Ariel Henry pays a $50 million ransom and resigns.