At least four of Colombia’s largest cities – including its capital Bogotá – hosted marches attracting thousands of people on Sunday in support of the nation’s police and opposing leftist roadblocks and riots allegedly against police brutality, among other things.

Colombia experienced over a month of violent attacks on police, health sites, and historical institutions as part of what a coalition of labor unions and other left-wing interests have dubbed a “national strike.” The “strike” began in late April as a protest against progressive tax increases proposed by self-proclaimed conservative President Iván Duque, but Duque withdrew his proposal days after the strike began, eliminating the need for social action.

“National strike” organizers have since published several incoherent demands of the government, including requesting to end all “gender discrimination” and to end the “massacre” of protesters by police, though rioters have overwhelmingly been the ones engaging in violence.

Leftist mobs did not cease their violent attacks following Duque’s walkback of the policy proposal, instead escalating to burning down historic buildings, setting police officers on fire, sending mobs into residential communities to loot and destroy, and blocking major roads and highways, causing avoidable deaths by blocking ambulances. Much of the violence has occurred in Cali, a southwestern city, where the first “march of silence” in favor of police occurred last week, attracting thousands of residents.

The protesters wore white to represent peace and brought signs bearing slogans such as “justice, freedom, and order;” “no more vandalism;” and “there are more of us good guys.” Many used the hashtag #YoProtegoMiPais, or “I protect my country.”

Many of those in attendance at several of the rallies also participated with religious iconography, carrying crucifixes and icons of the Virgin Mary. Colombia is a predominantly Roman Catholic country. 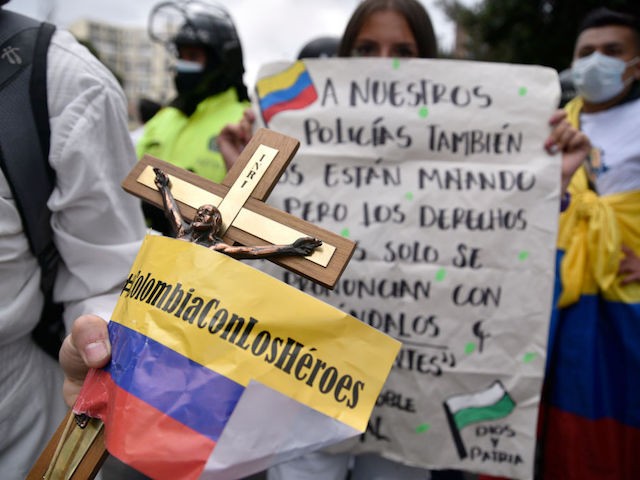 A man holds a cross and a Colombian flag during a mobilization against violence and in support of public forces on May 30, 2021, in Bogotá, Colombia. (Guillermo Legaria/Getty Images) 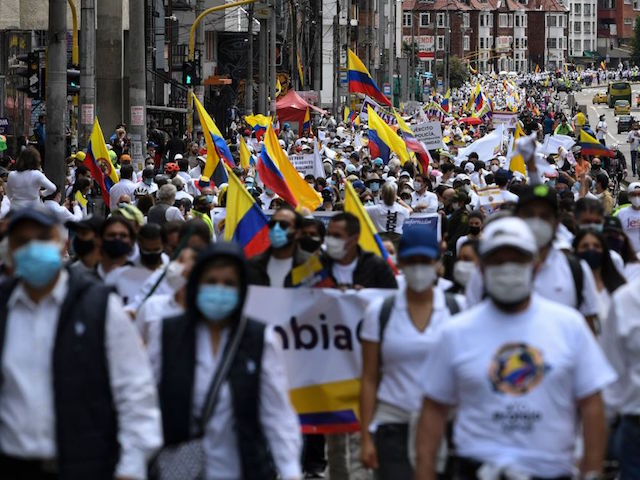 People holding the Colombian national flag are seen during a demonstration in opposition to road blockades and violence, after a month of national protests, in Bogota, on May 30, 2021. (JUAN BARRETO/AFP via Getty Images)

“We understand the crude reality our country is facing,” the organizers of the march in Medellín said in a statement. “We hear with empathy the voices of all and are filled with courage to confront this challenge with tenacity and greatness. That is why we march, without discrimination, stigmatization, or partisanship.”

The “national strike” turned violent almost immediately, initially resulting in the mass vandalizing of businesses and homes, largely in Cali. In early May, multiple reports surfaced, most of them in Cali’s Valle del Cauca region, of unknown “hooded” individuals firebombing police stations, burning them down, and in some cases, setting police officers on fire. In one particularly violent incident in Bogotá, a policewoman told Colombia’s Caracol TV she watched “protesters” throw Molotov cocktails at her police station and fled the ensuing fire, only to be pelted with rocks and beaten by a masked gang.

“We raised our hands practically just asking them to please not attack us and we were shouting it, ‘please don’t hit us, don’t hit us,’” the officer described. “When we started exiting they started to throw rocks, stones, giant rocks and they hit me in the foot. I got tangled up and fell, and when I fell I felt the first kick, kicks everywhere.”

Other attacks nationwide occurring during the national strike targeted convoys carrying necessary medical supplies, including Chinese coronavirus vaccines and infectious disease protective equipment, and apartment complexes. Last week, unidentified “hooded vandals” burned down the Palace of Justice of Tuluá, a city in Valle del Cauca. The nearly 100-year-old building is one of the most significant cultural losses for the country in the ongoing “national strike,” serving as government offices but historically used as a legal educational institution.

Many Colombians, particularly in Valle del Cauca, responded to the violence by arming themselves, resulting in civilians opening fire on rioters during times in which police were under attack and thus unavailable to help them. Conservative lawmakers have renewed calls for a law allowing citizens full rights to bear arms. The Colombian constitution grants the government a monopoly on violence and does not protect the rights of private citizens to own firearms.

The Duque government has attempted to end the “national strike” by organizing “dialogues” with representatives of the participating leftist groups, which have not resulted in any meaningful progress. Organizers, which have endeavored to remain anonymous, refused talks with the federal government on Sunday, accusing it of launching a “policy of war against the strike.”

“In the past few days, the simulated will to negotiate of the government … has vanished completely,” a statement from the strikers published on Sunday read.

The Duque government announced in early May it compiled evidence some of those participating in the “national strike” have ties to the National Liberation Army (ELN) and the Revolutionary Armed Forces of Colombia (FARC), both Marxist terrorist organizations.